With the suspect of last year's wave of bomb threats currently behind bars, who is behind the scares now? 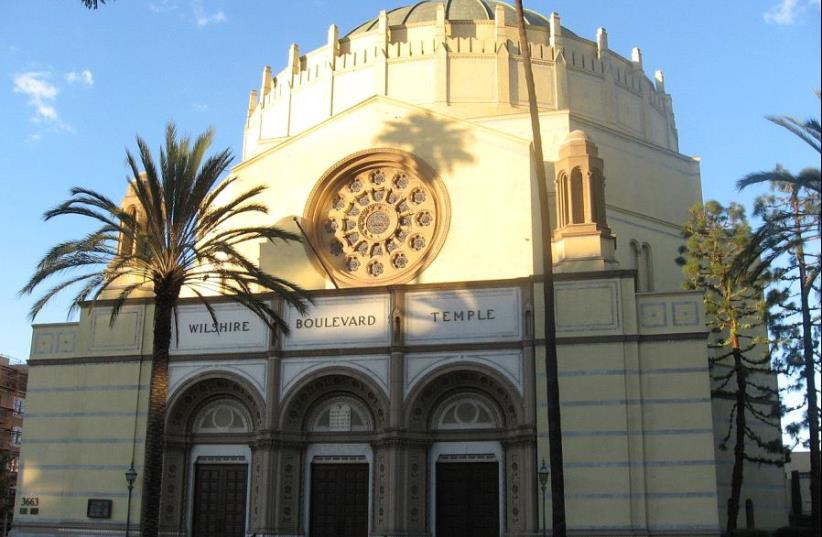 Wilshire Boulevard Temple in Los Angeles, California.
(photo credit: WIKIMEDIA)
Advertisement
Three Los Angeles synagogues were closed down Saturday after receiving a series of bomb threats online, The Jewish Journal .According to LA Police Officer Mike Lopez, the Glazer and Irmas locations of Wilshire Boulevard Temple and the Brentwood University Synagogue were shut down just after 8 a.m., and reopened after LAPD cleared all three around 12:45 p.m.University Synagogue's Rabbi Morley T. Feinstein told the Journal that a staff member "Found an e-mail that was beyond nasty - horrific language and threatening," that had been submitted via the temple's online submission form. They then phoned the police.Lopez noted that K9 units found no evidence of a credible bomb threat. "We just want to remind the community to be aware of their surroundings," he added. "If they see something, say something."According to Feinstein, when congregants arrived at University Synagogue for their morning Torah study group only to find the doors locked, they ventured down a block to continue their study on the sidewalk."We never stop the study of Torah - no matter what."
Israel indicts US-Israeli teen over bomb threats (credit: REUTERS)
An 18-year-old dual American Israeli living in Ashkelon, Israel was arrested in March under suspicion of being behind most of a series of bomb and other threats to Jewish communities in the US, Europe, Australia and New Zealand that date back around six months.His parents claim their son has severe autism and a brain tumor that affects his behavior, which led him to issue the threats. A gag order has been placed on the identity of the suspect.Yonah Jeremy Bob and Eliyahu Kamisher contributed to this report.