UJA Federation of New York's financial aid will help organizations respond to emerging needs, cover losses associated with the disruption of their operations, and help them continue their work. 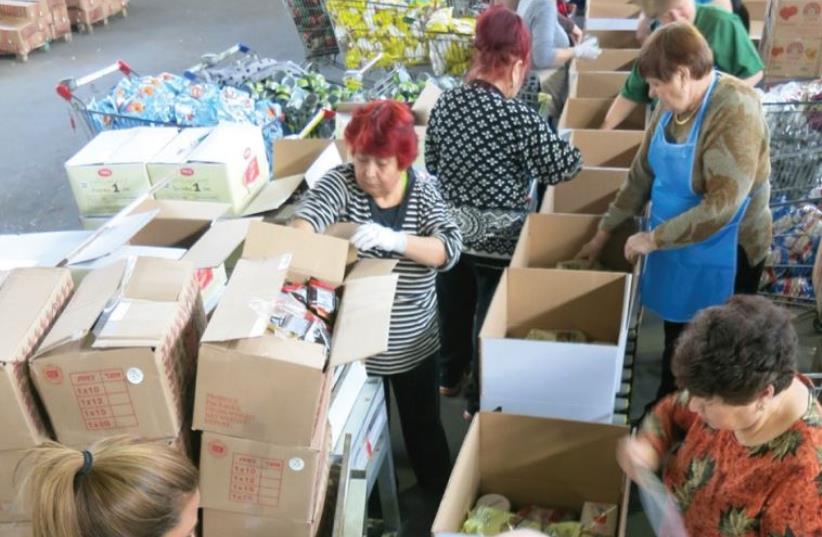 VOLUNTEERS PREPARE food packages for the needy ahead of Passover at a Kolel Chabad center earlier this week
(photo credit: KOLEL CHABAD)
Advertisement
As of Monday night, 20,875 people have been infected with the coronavirus in New York State, and as the virus is spreading, many people are in an urgent need of receiving greater support and assistance, including in the Jewish community. To help those most affected, the UJA Federation of New York announced it would provide over $23 million worth of financial aid.
Through loans and grants, UJA intends to offer immediate relief to New Yorkers facing food insecurity and to assist its partner organizations in providing essential services to their communities. This financial aid is critical for many organizations working to help the most vulnerable populations, as they're facing many challenges due to the coronavirus outbreak, including an increase in demand for their services as well as a decrease in donations and volunteers.
“This first round of grants is a critical part of UJA’s broad effort to support the most vulnerable New Yorkers during this crisis. We’re deeply grateful to all our nonprofit partners on the front lines who work tirelessly – day in and day out, and in times of crisis – to sustain our community,” said Eric S. Goldstein, CEO, UJA-Federation of New York.
In a recent statement, UJA listed some of its new operations, highlighting how the funds will be used.
The UJA will grant $1,750,000 to Metropolitan Council on Jewish Poverty. $1 million will be dedicated to helping the organization to continue its operations and to provide food to those in need. An additional $750,000 will help the Council provide emergency Passover meals to over 180,000 people.“Met Council is on the front lines with UJA-Federation dealing with an unprecedented crisis unfolding in our city. After healthcare, the number one concern that we should have is feeding struggling, homebound and elderly New Yorkers. The emergency food pantry system is strained in a way that we have never seen before. This emergency funding from UJA will allow us to serve hundreds of thousands of New Yorkers who are now in crisis. We are grateful for the partnership that we have with UJA-Federation and their incredible leadership during these times,” said David G. Greenfield, CEO, Met Council.
As many Jewish New Yorkers will face difficulties this Passover, UJA is making $250,000 available for Passover meals to-go that will be distributed to those who are isolated or quarantined, have relied on free or subsidized communal seders, or are newly financially vulnerable because of the virus.
UJA will also establish a $20 million loan fund at the Hebrew Free Loan Society (HFLS) to offer zero-interest loans to UJA partners that are in financial difficulties. An additional $1 million loan will ensure that HFLS can continue to provide loans to small businesses.“This is a fast, bold response by the UJA-Federation of New York. There is already tremendous need, and it will deepen as we move forward. The Hebrew Free Loan Society and all nonprofits must work hand-in-hand with funders, employers and government to ensure people have access to basic needs as income disappears or payments are delayed,” said Rabbi David Rosenn, Executive Director of Hebrew Free Loan Society.
Finally, the UJA will serve on the steering committee of New York City COVID-19 Response & Impact Fund, a group of leading philanthropic organizations that support New York City-based social services and cultural organizations that have been affected by the coronavirus. The $75 million fund provides grants and zero-interest loans to nonprofits to help them respond to emerging needs, cover losses associated with the disruption of their operations, and help them continue their critical work.