A spate of planned executions in Arkansas rekindles the debate. 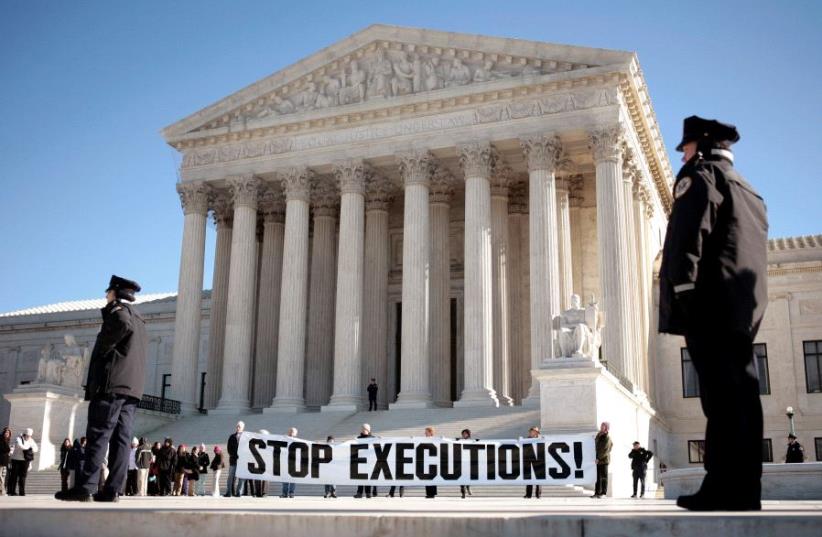 Protesters calling for an end to the death penalty unfurl a banner before police arrest them outside the U.S. Supreme Court in Washington January 17, 2007.
(photo credit: REUTERS)
Advertisement
NEW YORK – Although a large portion of the US Jewish community is opposed to the death penalty, an issue that has recently been making headlines following cases in Arkansas, the concept of capital punishment has its roots in the Bible and is mandated by the Torah, New York rabbis told The Jerusalem Post on Wednesday.The issue has sparked debate again in April after the State of Arkansas announced plans to execute eight inmates on death row by the end of the month, when the state’s stock of a lethal injection drug expires.On Monday, the Supreme Court blocked two of the executions, just hours before they were scheduled to take place. These would have been the state’s first executions in over a decade. The legal battle over the fate of the death row inmates is ongoing.Orthodox Rabbi Allen Schwartz of Congregation Ohab Zedek on the Upper West Side told the Post that while the Torah calls for the death penalty for many violations, it is used very carefully, and more as a deterrent.“It says that if a Jew was put to death once in 70 years, that is considered a bloody century,” he said. “It was rarely ever promulgated.”While in the texts, crimes like adultery and violation of Shabbat were punishable by death, today the sentence is mainly reserved for murder.“It is clearly the worst of all sins,” Schwartz said. “The people in Arkansas who are on death row are there for taking life, not for egregious drug sales. The country would not kill Bernie Madoff for stealing 65 million dollars. He’ll spend the rest of his life in jail but they’re not gonna kill him for that.”Rabbi Mark Wildes of the Manhattan Jewish Experience, a community for young Jews in New York, added that in order to carry out an execution, “Jewish law requires so much of the prosecution that it is almost impossible to carry out the death penalty in practical reality.”Wildes said from a Jewish point of view, the evidence against the defendant in a death row case needs to be very conclusive, to the point that there is no doubt the person has committed the crime.“To favor the death penalty as Jews, the American legal system would need to require the prosecution to provide more evidence than the current American system requires, to ensure a higher level of certainty that the defendant had in fact committed the crime,” he said.But according to Schwartz, while capital punishment could be debated for sins other than murder, “the taking of a life is something so egregious that there is no punishment that can atone for such a sin.”“For people who kill others... there is only one approach that mankind has to have to this, and it says so again and again in the Torah,” he told the Post. “If Jews are saying they are categorically against the death penalty, I don’t know if that’s a Torah value.”Nevertheless, the risk of executing an innocent person shouldn’t be taken lightly, the rabbis agreed.“There is no threshold for even one out of a thousand people killed without deserving it,” Schwartz stated. “You don’t want to get the death penalty wrong, but when it’s unequivocal that this person took life, you have unequivocal evidence, then Judaism is also unequivocal about that.”In addition, Judaism strongly focuses on the idea of teshuva, repentance for one’s sins, an idea that often seems to be in conflict with the finality of capital punishment.“Judaism believes in giving as many opportunities as possible for the convicted to repent,” Wildes pointed out. “There really is no idea of punishing for the sake of punishing in Judaism – it’s all part of enabling the convicted person to be restored spiritually and ethically.”Although repentance is an indispensable part of the rehabilitative process, Schwartz believes it can still go hand in hand with execution.“If someone unequivocally committed murder, part of his teshuva is being killed,” he said.If the executions in Arkansas are carried out after all, they would be a major step back in the US. According to data published last week by Amnesty International, the number of executions have significantly declined in the country in recent years.In 2016, only 20 executions were carried out in the US, the country’s lowest number since 1991.For the first time in 10 years, the US was also not one of the five biggest executioners, falling to seventh place. Most executions took place in China, Iran, Saudi Arabia, Iraq and Pakistan – in that order.