French delegation leader: Our work is to make young people feel part of a Jewish future. 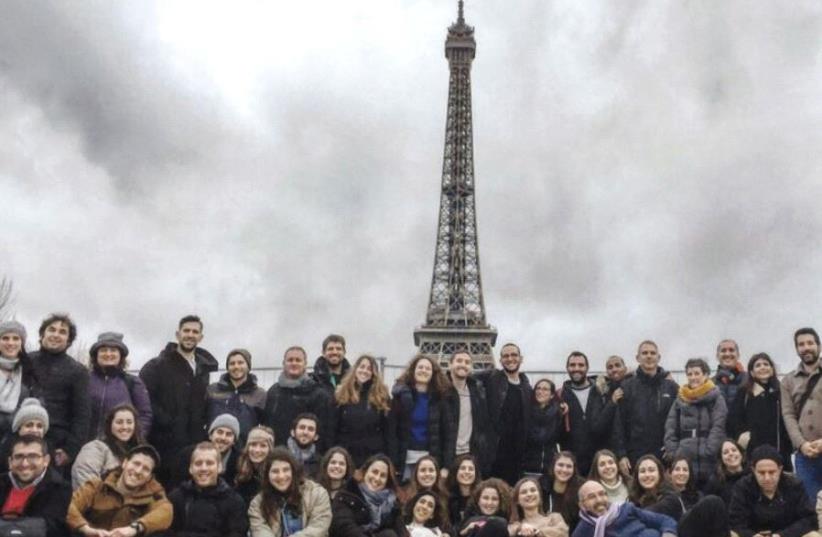 FRANCE’S JEWISH AGENCY employees and participants pose in front of the Eiffel Tower.
(photo credit: JAFI)
Advertisement
Less than a week before the Jewish Agency Board of Governors is scheduled to convene in Tel Aviv for its annual conference, the head of its French delegation said aliya rates continue to soar in France, amid ongoing antisemitism and the agency’s outreach and education efforts.During an interview with Daniel Benhaim, who oversees the agency’s offices in France, Italy, Belgium, Switzerland and Spain, he said France’s 450,000 Jews are undergoing a considerable exodus from a country rife with intolerance.According to Benhaim, the agency is involved in a multitiered effort to educate a new generation of French Jews about their history, protect the greater Jewish community and provide the means for olim to safely come to Israel.“Our actions are presently directed in two directions,” said Benhaim by phone on Wednesday from his Paris office. “The first one is all our activity toward aliya.”To this end, Benhaim said numerous outreach efforts, including through fairs, lectures, a website and social media platforms, are used to inform the Jewish community about the variables involved in moving to Israel and securing citizenship.“We want to give all the people interested in making aliya the answers to their questions and to help them do it in the best way possible,” he said.And the outreach efforts have clearly paid off.Indeed, over the last three years Benhaim said some 20,000 Jews, primarily from Paris, have successfully made aliya.“It’s a very big number, and for sure greater than in previous years,” he said.Benhaim cited three reasons for the spike in aliya.“The first one is the concern about the Jewish place in Europe, as its identity changes and becomes increasingly Muslim,” he said. “The second one involves security for people in general, and Jews in particular. And the third one involves the economic conditions in Europe, which has remained in a crisis since 2008. I think all of these concerns together create a feeling of instability, and when there is a lack of stability there is more [motivation] to make aliya.”Moreover, Benhaim said France’s forward-thinking younger generation of Jews is increasingly finding Israel to be a preferable option over Europe.“They see in Israel dynamic thinking and a dynamic country,” he explained. “And a key priority for our international delegation is to work with schools and youth movements, [with those] between the ages of 13 to 35, to strengthen their relationship with Judaism and connect them to Israel.”Through their connection to Israel, he said, they “find a new reason to connect to their Jewish identity.”Benhaim cited linking France’s younger population to Israel as a key component in promoting aliya, as well as Jewish identity.“Building a connection to Israel can help the Jewish youth population in the [diaspora] to feel better as Jews,” he said. “For a lot of countries, to be Jewish was good for their parents, and in most cases their grandparents, but now young people tell themselves: ‘Maybe Judaism was for the past, and not something that is modern.’ And when they are connected to Israel they can discover a very, very modern Jewish society that reconciles their identities as modern and Jewish people.“So, a part of our educational work is to try to make these young people feel a part of Jewish history, of the Jewish community and of the Jewish future,” he continued.Asked which regions of France most olim are leaving from, Benhaim said the vast majority are Parisian.“Most of the Jews in France are living in Paris and the suburbs of Paris,” he said. “So, something like 70% are coming from those regions.”In terms of the present security climate for Jews, Benhaim said, “Things are not better, but people are now used to it as a part of life.“At the beginning, it [attacks against Jews] was a shock, and now it is more normal to have heightened security at synagogues and Jewish schools,” he said, adding that the agency has worked directly with all Jewish institutions to increase necessary safeguards.“The fact that terrorists are targeting the general population now has changed the game slightly, but I’m not sure that the situation is better; only that people are more used to it now,” he said.In the meantime, Benhaim said France’s volatile geopolitical climate will likely result in ongoing high rates of aliya, with over 5,000 this year, as it has averaged over the last three years.“I think that aliya will continue to be important,” he emphasized.The 2017 Jewish Agency Board of Governors meetings will take place at the Hilton Tel Aviv, from February 26 to 28.This article was written in cooperation with the Jewish Agency for Israel.