'The Jerusalem Post' had uncovered the account with the bank of La Campagne BDS France, which targets Israel with economic warfare. 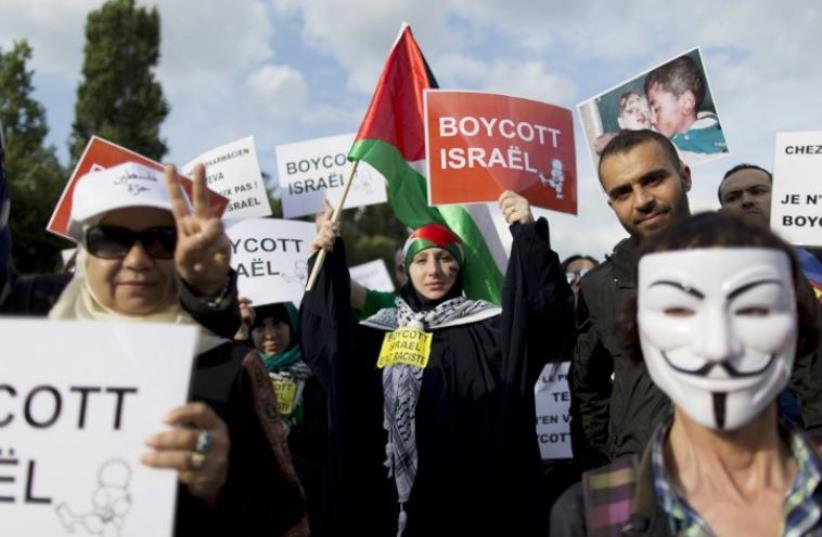 People protest at the Place de la Rotonde square in Paris against Israel's military operations in Gaza
(photo credit: AFP PHOTO)
Advertisement
NEW YORK – The president of the Representative Council of French Jewish Institutions (CRIF) called for the Credit Mutuel bank to pull the plug on the account of the main anti-Israel BDS group in France.The Jerusalem Post had uncovered the account with the bank of La Campagne BDS France, which targets Israel with economic warfare.Roger Cukierman, the head of CRIF, told the Post on Wednesday that “a boycott [of Israel] is forbidden by law” in France, and said the BDS France account should be closed. France’s 2003 “Lellouche law” bars boycotts based on national origin. French courts have enforced the Lellouche law by fining BDS activists.Frédéric Monot, a spokesman for Credit Mutuel, said, “We do not disclose information covered by banking secrecy, but we strictly respect the application of French law.”BDS France did not immediately respond to a Post query.After the Post exposed its existence in February, BNP Paribas terminated the account of the main BDS group in Germany – BDS Campaign. BDS Campaign had an account with BNP Paribas’s subsidiary DAB Bank in Munich.According to sources in France, BNP Paribas shut the BDS Campaign account because it was in violation of the Lellouche law.A planned New York State anti-boycott law would impact Credit Mutuel’s office in Manhattan.“The New York legislation would certainly adversely affect those banks. In a time of crisis that is growing more acute by the day, Americans and New Yorkers want to stand with our strategic democratic ally Israel and against hatred peddled by the BDS movement,” State Assemblyman Charles Lavine said in early April.A spokesman for Credit Mutuel in New York declined to answer a Post query.Public Security Minister Gilad Erdan said, “We continue to urge all financial institutions to carefully consider the potential legal, reputational and ethical consequences of facilitating the activities of BDS groups.”According Credit Mutuel’s website, it is a “French banking network consisting of 5,390 local cooperatives and mutual funds.”The bank has 7.4 million customers.