Found guilty in court in 2015, Oskar Groening is yet to be sent to prison. 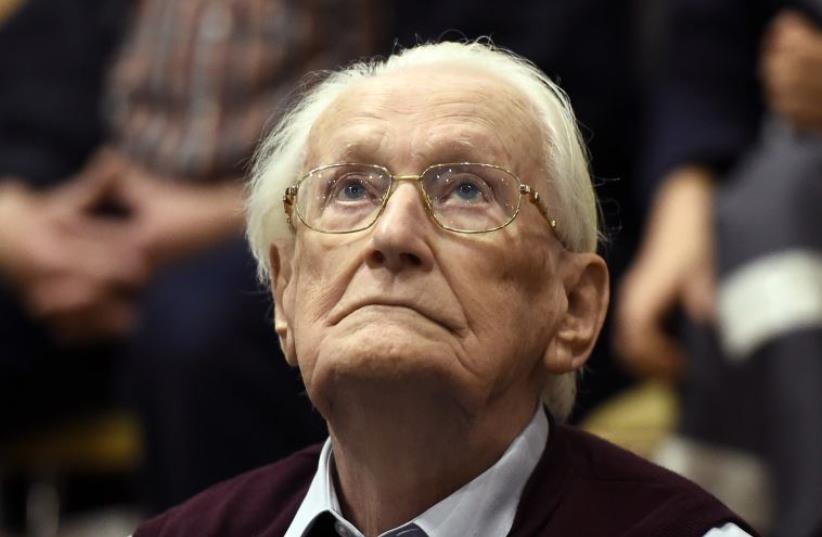 Oskar Groening
(photo credit: REUTERS)
Advertisement
BERLIN - A medical examination showed a 96-year-old German known as the "bookkeeper of Auschwitz" was fit to start serving his prison sentence, German prosecutors said on Wednesday, but his lawyer said a court should decide whether he was well enough.Oskar Groening was sentenced to four years in prison in 2015 for his role in the murder of 300,000 people at the Nazi death camp Auschwitz in what was seen as one of the last major Holocaust trials.He has not yet begun serving his sentence because his lawyer appealed the verdict - though the Federal Supreme Court in November upheld the 2015 ruling - and it has since taken time for the files to be transferred back, said Kathrin Soefker, a spokeswoman for prosecutors in Hanover.Prosecutors have rejected Groening's request for a reprieve after a medical assessment determined he was fit for detention, she said."After getting an official medical opinion we assume Mr. Groening is able to go to prison," Soefker said."A 96-year-old has physical constraints but if he can get appropriate medical and nursing care in a prison or correctional facility, he is fit for prison," she added.But Groening's lawyer, Hans Holtermann, told Reuters he did not think Groening can survive imprisonment."We will apply for a decision to be made by the court," Holtermann said."We think a sensible assessment (of Groening's health) should have been carried out and that has not happened yet," he said.Groening, who is physically frail, has said he was an enthusiastic Nazi when he was sent to work at Auschwitz in 1942, at the age of 21.In 2015 prosecutors argued that although Groening did not kill anyone himself while working at Auschwitz, in Nazi-occupied Poland, he helped support the regime responsible for mass murder by sorting bank notes seized from trainloads of arriving Jews.Many Germans want to draw a line under the Holocaust and instead focus on the country's post-war democratic identity..