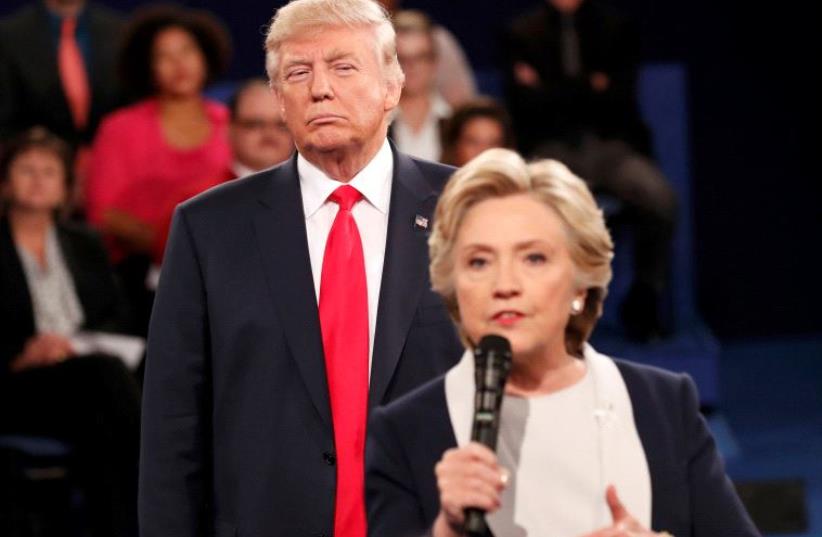 Republican US presidential nominee Donald Trump listens as Democratic nominee Hillary Clinton answers a question from the audience during their presidential town hall debate at Washington University in St. Louis, Missouri, US, October 9, 2016
(photo credit: REUTERS)
Advertisement
Hillary Clinton on Tuesday condemned a recent streak of "troubling" antisemitic incidents, and called for action first and foremost from US President Donald Trump."JCC threats, cemetery desecration & online attacks are so troubling & they need to be stopped," she wrote on Twitter. "Everyone must speak out, starting w/ @POTUS."

JCC threats, cemetery desecration & online attacks are so troubling & they need to be stopped. Everyone must speak out, starting w/ @POTUS.

Wave of bomb threats called to Jewish commmunity centers across the US , possible antisemitism(credit: REUTERS)
Clinton, who ran as the Democratic candidate in the latest US presidential election, made the remarks a day after vandals damaged and knocked-over more than 100 headstones at a St. Louis-area Jewish cemetery.Also on Monday, 11 Jewish community centers across the United States were targeted with false bomb threats, the fourth such wave of harassing phone calls in five weeks.The White House responded to a reporter’s query about the latest string of bomb threats called in to Jewish community centers by saying “these actions are unacceptable.”“Hatred and hate-motivated violence of any kind have no place in a country founded on the promise of individual freedom,” read a statement, attributed to White House press secretary Sean Spicer, that was shared Monday afternoon by NBC News correspondent Peter Alexander. “The President has made it abundantly clear that these actions are unacceptable.” The statement did not specify that the threats targeted Jewish institutions, although it came in reply to a query about threats to JCCs.Alexander posted Spicer’s response on Twitter, adding,  “@PressSec responds to my request for comment about wave of threats to Jewish community centers.”Separately, Trump’s daughter, Ivanka, who is Jewish, condemned the threats in a Tweet that pointed to the fact that the targets were Jewish.“America is a nation built on the principle of religious tolerance,” she said. “We must protect our houses of worship & religious centers.” She ended the tweet with the hashtagged acronym for Jewish community center, “#JCC.”

America is a nation built on the principle of religious tolerance. We must protect our houses of worship & religious centers. #JCC

Last week, President Donald Trump was asked during a news conference about the prior JCC bomb threats and what the government’s response would be to “an uptick in antisemitism.” Although the reporter did not suggest Trump was anti-Semitic, the president answered by denying he is an anti-Semite and called the question “insulting.”Shortly afterward, various Jewish groups, including the Anti-Defamation League and the American Jewish Committee, urged the White House to issue an unequivocal denunciation of the bomb threats and other antisemitic acts.