Antisemitic threats have moved from the confines of the Internet to the public sphere, and Polish Jews now fear for their physical wellbeing. 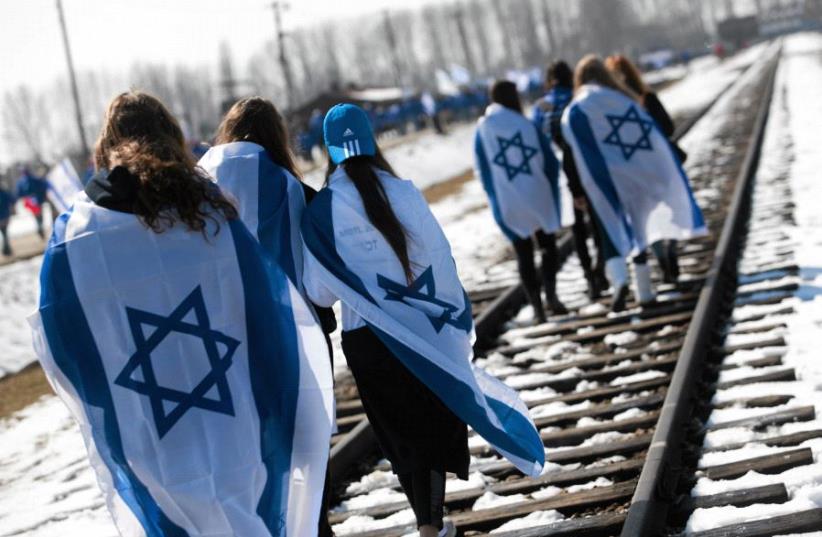 People wear Israeli flags around their shoulders as they walk on the railroad tracks inside the former Nazi death camp of Birkenau (Auschwitz II) in Oswiecim-Brzezinka, southern Poland April 8, 2013.
(photo credit: REUTERS/JAKUB OCIEPA/AGENCJA GAZETA)
Advertisement
Polish Jewish organizations published an open statement on Monday, expressing outrage over the “growing wave of intolerance, xenophobia and antisemitism in Poland," since the subject of the “death camps law” came to the foreground of domestic and international politics.In a statement posted to the website of the Union of Jewish Communities in Poland, a letter signed by dozens of Polish Jewish representatives said that hate speech had spread from the confines of the Internet to the public sphere.“We are no longer surprised when members of local councils, parliament and other state officials contribute antisemitic speech to public discourse,” the letter reads. “The number of threats and insults directed toward Poland’s Jewish community is rising.” While expressing appreciation to President Andrzej Duda, Prime Minister Mateusz Morawiecki, and Law and Justice party leader Jarosław Kaczynski, for condemning antisemitism, the groups said that the “words ring empty” and will have no impact without strong supporting actions."On the eve of the fiftieth anniversary of the antisemitic events of March 1968 and 75 years after the Warsaw Ghetto Uprising, Polish Jews do not feel safe in Poland," the letter said. While highlighting that today, Polish Jews -- unlike other European Jews -- do not face physical threats, "our situation is far from normal."The groups are calling on their country's leaders publicly recognize that there is a dangerous and growing problem and for the authorities, public institutions and members of the public to cooperate with the Jewish community to combat antisemitism."We know that Jews are not the only victims of Poland’s current hateful climate," said the group's note, emphasizing that the Jews stand in solidarity with all people in Poland who experience hostility and discrimination."The current wave of antisemitism arose in response to an amendment to the Act on the Institute of National Remembrance. We believe this law to be poorly constructed and detrimental to open discussion of history. If Poland’s government believes that even sporadic mentions of “Polish Death Camps” must be criminalized, certainly the rising intolerance and antisemitic hatred in our country should be subject to similarly serious measures," the statement concludes. "Our government possesses the legal instruments to combat hatred but lacks political will. We call upon our politicians to change course."Among the signatories of the statement are branches of major Jewish organizations including Hillel, B'nai Brith and JCCs.