Amna Farooqi, a Muslim with Pakistani roots, came to Israel last month with Diaspora Jews to show solidarity with Palestinians. 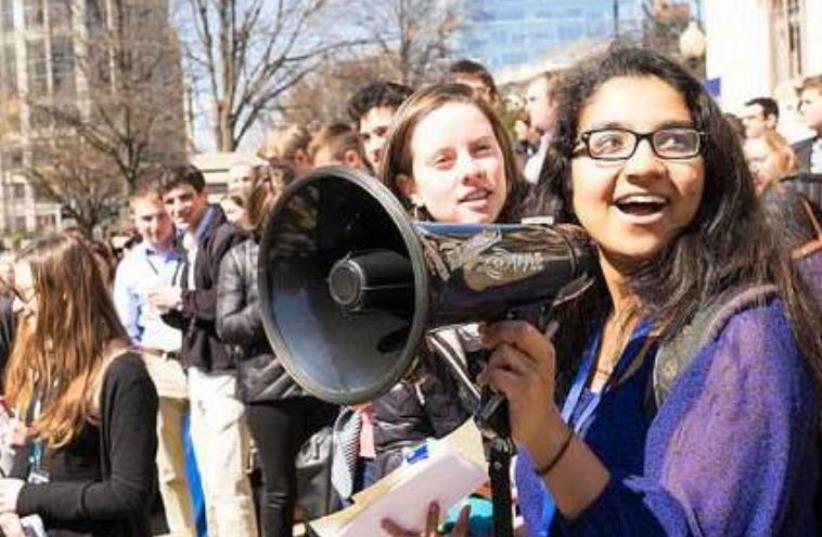 Amna Farooqi
(photo credit: AMNA FAROOQI FACEBOOK PAGE)
Advertisement
In the summer of 2015 a synagogue in Ramle, popular with the Jewish community from Pakistan, received an unlikely visitor: an American active in J Street, who also understood their unique dialect of Urdu and Hindi. Amna Farooqi still remembers her visit there. She had rented a car specially after she heard that there were Pakistani Jews in Israel. Her Muslim family came from the same region.“Israel has its own dynamics and Israel is a complicated place; Diaspora Jews come in with privilege, and it’s so easy to come and see the occupation and see the real and horrible violence Palestinians face daily and only see that,” Farooqi recalled on Sunday.Farooqi, 23, a past president of J Street U, is a recent graduate of the University of Maryland.When she was elected to her position at J Street, it raised eyebrows because she is Muslim. In May she returned to Israel with the Center For Jewish Nonviolence to participate in the Sumud Freedom Camp alongside 130 Diaspora Jews. The purpose of the trip was to support Palestinians.“[We came] to the region to engage in solidarity actions with Palestinian communities, we did a lot of things, we visited families affected by the occupation, heard from Israeli activists and what life is like in Israel, how it [the occupation/ conflict] affects life, we saw different layers of Israeli society, including Mizrahi Israelis,” she said.“The main action was Sumud Freedom Camp, an encampment in Sarura, in military firing zone 918 in the South Hebron Hills. It was led by this coalition of Palestinian, Israeli and Diaspora organizations; a historic coalition of Youth against Settlements, Holy Land Trust, Combatants for Peace, the Center for Jewish Nonviolence, the Popular Resistance Committees of south Hebron Hills and All That’s Left.”For Farooqi this was the largest activist direct action event like this she has taken part in, and it was exciting and inspiring. The organizations also had to navigate politics in the region, including internal Palestinian opposition from groups that oppose “normalization” with Israelis.“There are a lot of people from different backgrounds, some more to the Left and Right; we can come together and we see if something is wrong. The occupation makes demolitions in [the] South Hebron [Hills], and there are outposts such as Havat Maon that are violent and aggressive.You can help some family come back in the face of that.”She says that the Israeli army was also surprised when soldiers came and saw so many Diaspora Jewish activists partnered with Israelis and Palestinians.Farooqi felt that partnership with local Palestinians was important because it changes stereotypes.“I remember a Palestinian child asked me last year if there are Jewish people who are not settlers,” she recalls.Part of changing stereotypes means not only changing Israeli views of Palestinians or Palestinian views of Jews and Israelis, but also Jewish Diaspora views about Israel.She says that sometimes it’s easy for those abroad to “erase the humanity of Israelis,” and the Diaspora needs to have more nuance. “[Israelis] have lives and complicated experiences and have their own internal dynamics of racism and oppression, and it’s important to be sensitive to that and understand the history of Jews from Europe and Arab countries, so that experience puts a human face on the fact that Israel is complicated.”Part of that means understanding that Israelis also suffer from the occupation, in a different way than Palestinians.It means remembering that the synagogue of the Pakistani Jews in Karachi was destroyed, and for them Israel was a place of refuge.She also thinks that US Jewish community organizations need to start being honest with themselves about the threat to the two-state solution. “Thinking about my experience in J Street U, I met many people in the Jewish community and met a lot of leaders in organizations, and they genuinely care about peace and want peace, but they don’t understand how the far Right [in Israel] is entrenched with organizations like Regavim... If you have a stake in this, think about where your money goes, and communal organizations are not thinking about this, they think they are apolitical.“I worry, every time I’m there [in Palestinian areas], it’s harder to see the two-state solution, which is so cemented in US thought, it’s harder to see that reality, and groups like Regavim need to be fought effectively.” Regavim is an NGO that says it works to protect Israel’s national lands, but which Farooqi accuses of harassing Palestinians through its monitoring activity and advocacy.For her the main thing is that activists who come to Israel need to get beyond the stereotypes, and not just come for a few days and take selfies.Farooqi says that the issues affecting Israel and Palestinians will always be in her heart, but what she describes as the erosion of democracy in the US is a more pressing issue now with President Donald Trump in power. She is heading to Georgia to work for Democratic nominee Jon Ossoff’s congressional election campaign and wants to be involved in community organizing and activism.