Japanese ‘Schindler’ a model of diplomacy at Holocaust remembrance event 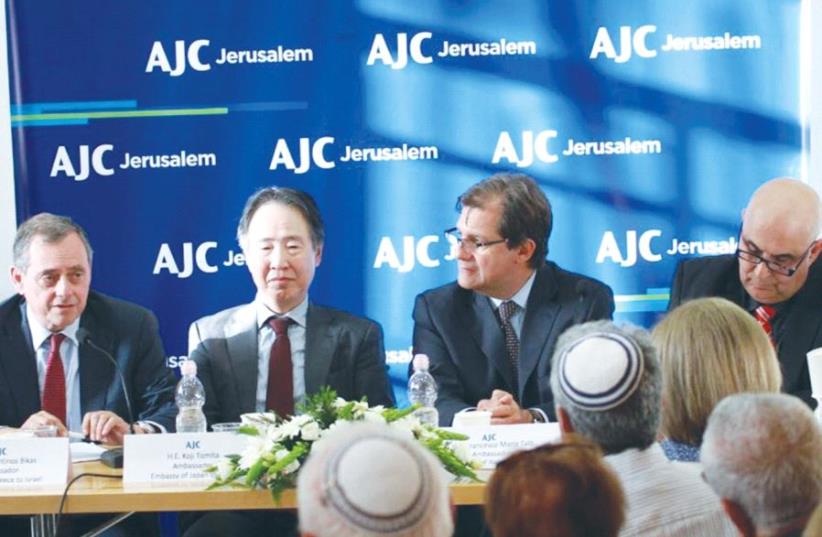 PARTICIPATING IN A panel discussion in Jerusalem on Thursday are, from left, Greek Ambassador Konstantinos Bikas, Japanese Ambassador Koji Tomita, Italian Ambassador Francesco Maria Talo and the IBA’s Elihu Ben-Onn
(photo credit: AJC)
Advertisement
The legacy of Japan’s “Schindler,” vice consul Chiune Sugihara, was celebrated as a model of diplomacy at an event held Thursday night in Jerusalem that delved into the relationship between diplomacy and the Holocaust.Sugihara was the Japanese vice consul in Kaunas, Lithuania, between the years of 1939 and 1940. Against his government’s orders, he granted thousands of visas to European Jews, allowing them to exit occupied Lithuania and flee to Japan using the Trans-Siberian railway. When he was rushing out of Lithuania, he continued signing visas and even left signed open visas to help more Jews. He rescued thousands of Jews and is the only Japanese Righteous Among the Nations.The American Jewish Committee Jerusalem’s annual Holocaust commemoration event featured a panel discussion between Japanese Ambassador to Israel Koji Tomita, Italian Ambassador to Israel Francesco Maria Talo and Greek Ambassador to Israel Konstantinos Bikas.Noting the homogeneous nature of Japanese society, Tomita acknowledged that Japan lacks a communal mechanism to remember the Holocaust. “The Japanese don’t have relatives who can tell them what happened,” he said, highlighting education as the main vehicle through which to keep alive the memory of the Holocaust.Nonetheless, he said that history textbooks are not always sufficient and that a conscious outreach to the general public is necessary. Retelling Sugihara’s story is key to these efforts.“As a diplomat, I am keenly aware that my profession can test one’s character – sometimes you need to make on-the-spot decisions alone. In 1940, Sugihara made this decision without consulting anyone and saved thousands of lives. I’m immensely proud of his accomplishments,” Tomita said.“I would not be standing here if it wasn’t for him,” said Nina Admoni, who told her story to the audience. Admoni, a Polish-born Jew who now lives in Israel, was rescued at the age of six, along with her parents, by Sugihara’s visas.Tomita believes that Israeli recognition of Sugihara’s actions has had a positive impact upon awareness of the Holocaust in Japan; last year, Israel named a street in Netanya after Sugihara, capturing headlines in Japanese media.Tomita also emphasized the importance of people-to-people exchanges and noted that Israeli tourism to Japan is an important tool for this. Israeli tourists visit sites linked to Sugihara, such as the city of Kobe, to which Jews rescued by Sugihara arrived from Lithuania. The Sugihara Chiune Memorial Museum in Yaotsu is another site of interest, as well Sugihara’s birthplace, Mino.During his tenure as ambassador to Israel, Tomita also hopes to encourage an increase of Japanese tourism to Israel. “I also think it’s important to strengthen human exchanges, not just with Israel, but with Jewish communities around the world,” he said.Bikas, in turn, spoke of Archbishop Damaskinos Papandreou of Athens, who led a diplomatic effort against the deportation of Jews in the Holocaust. Though his appeal for the cancellation of the German deportation order failed, he influenced clergy of all levels of the church to help the Jews through aid and refuge. In collaboration with the chief of the Athens police, Angelos Evert, Damaskinos also worked to issue thousands of fake identity cards to Jewish Greeks to protect those in hiding and to help others escape.“I think it’s impossible to understand human nature if we do not study the Holocaust,” the Greek ambassador said. “The Holocaust is a theme which rings a bell in us... it obliges us to look into ourselves and stop any signs of violence.”Meanwhile, Talo emphasized the importance of taking responsibility for both the past and the present.“We have to think not only about our responsibility today but also have a duty to take responsibility for yesterday,” the Italian ambassador said. Italy and Japan were Germany’s principal allies during World War II.“We cannot ignore the Italian responsibility in the Shoah. We cannot think that through good deeds we are absolved of what Italy did to the Jewish community – we were complicit with the Nazis. We have to say this very clearly,” Talo said. “We have a duty of memory and a duty to build a better future.”