The 83-year-old Jewish journalist will be honored for his lifetime of journalistic excellence and his staunch commitment to Israel and the Jewish people. 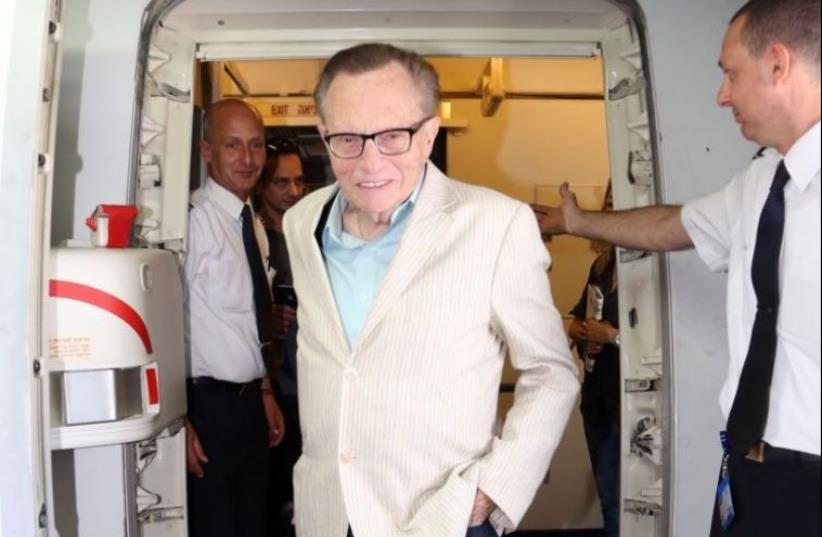 The King is back: Larry King visits Israel after 20 year hiatus.
(photo credit: SIVAN FARAG)
Advertisement
Legendary US television and radio host Larry King has been added to the lineup of the Jerusalem Post Conference taking place in New York City on May 7.The 83-year-old Jewish journalist, known for his trademark suspenders and animated style of delivery, will be honored for his lifetime of journalistic excellence and his staunch commitment to Israel and the Jewish people.The tables will turn on King, who will be interviewed by The Jerusalem Post onstage before 1,500 participants of the conference, which will take place at the Waldorf Astoria hotel.King, who began his career in Florida in the 1960s, rose to prominence in the 1970s with an all-night national radio show in the US. He catapulted to international fame when he joined CNN in 1985 and began hosting his popular nightly interview program, which continued until 2010.In 2012, King launched his own web series in a similar vein to his CNN show, called Larry King Now.The web series is available on Ora TV, Hulu and RT America.During a visit to Israel in 2015 to attend an education conference in Holon, King told the Post that he found Israel fascinating.“I feel such a joy being here. It reminds me of why I’m proud to be Jewish, to be born Jewish, to have a Jewish sense of humor, to be raised with a Jewish cultural ethic. I find Israel fascinating, because I see things here that I don’t see in America,” he said.King incorrectly predicted at the time that then-presidential candidate Donald Trump would not receive the Republican Party’s nomination, and defended former president Barack Obama against claims that he was anti-Israel.“Baloney... I think Obama has done a lot of wonderful things.I think he has done some things people may have some problems with,” King said. “I do not think Obama dislikes Israel and I do not think [Prime Minister Benjamin] Netanyahu dislikes America. I think these are two people with philosophical differences.”Joining King at the Post conference in New York will be a lineup of leading Israeli and American decision-makers, including Defense Minister Avigdor Liberman, Justice Minister Ayelet Shaked, Public Security Minister Gilad Erdan and representatives of the Trump administration.Transportation Minister Israel Katz, National Infrastructure Minister Yuval Steinitz, former Shin Bet director Yaakov Perry, Ambassador to the UN Danny Danon, Consul-General in New York Dani Dayan, US Rep. Eliot Engel (D-New York), president of the Jewish Federations of America Jerry Silverman and Post Senior Contributing Editor Caroline Glick will also address the conference.More information on the conference and tickets are available at www.jpost.com