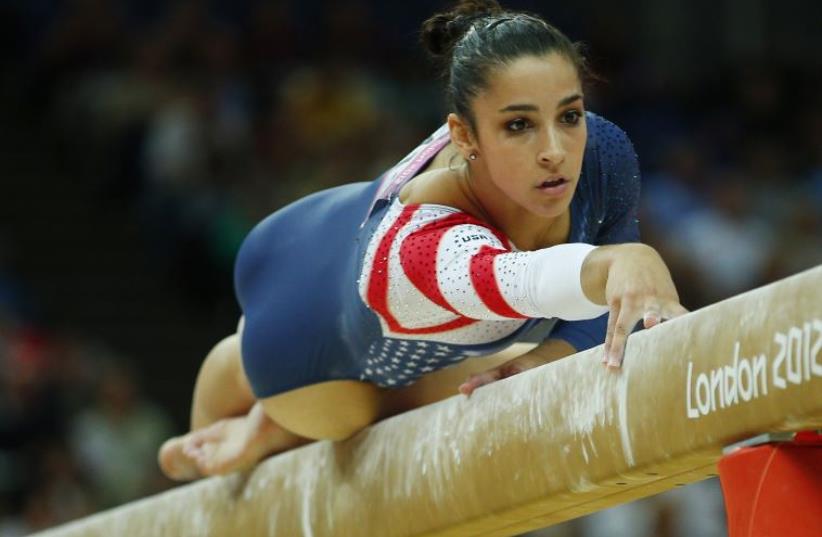 Alexandra Raisman of the US competes in the women's gymnastics balance beam final in the North Greenwich Arena during the London 2012 Olympic Games
(photo credit: REUTERS)
Advertisement
She has three Olympic gold medals, two silvers and a bronze. But that doesn't mean Jewish gymnast Aly Raisman isn't subject to unfair and unnecessary criticism from time to time. But the superstar isn't taking it lying down. The two-time Olympian posted a photo of herself in a bathing suit on Twitter and Instagram on Monday, with a message of empowerment and individuality.

Wear whatever makes you feel happy and confident. Don't EVER let anyone tell you how you should or shouldn't dress. We are all entitled to wear what we want. Females do not have to dress modest to be respected. Be proud of your body. It's never about the number on the scale it's about the way you feel. You are all unique and beautiful in your own way. No one is perfect. AND no matter who you are, male or female, we all have those days of insecurity. We are all human. Everyone's story is important. EVERYONE. You never know what someone is going through. Thank you all for continuing to inspire me each and everyday. Spread the love guys and enjoy your Monday ✨#IGotItFromMyMomma #GIRLPOWER
A post shared by Alexandra Raisman (@alyraisman) on Jun 5, 2017 at 1:37pm PDT

Raisman also spoke up last month after an experience with airport security she called "sexist." The gymnast said after a female TSA agent recognized Raisman by her biceps, a male agent said "I don't see any muscles" and stared at her. "How rude & uncomfortable," she wrote. "I work very hard to be healthy & fit. The fact that a man thinks he judge my arms pisses me off I am so sick of this judgmental generation." She added: "If u are a man who can't compliment a girls you are sexist. Get over yourself. Are u kidding me? It's 2017. When will this change?" Raisman has embraced her Jewish heritage both on and off the gymnastic floor; her 2012 gold medal-winning floor routine was performed to the tune of "Hava Nagila." She also dedicated the routine to the 11 Israeli athletes who were murdered by Palestinian terrorists at the 1972 Munich Olympics.