Latvian lawmakers to participate in annual SS march through capital

Around sixty seven out of seventy thousand Latvian Jews died in the holocaust, he said. 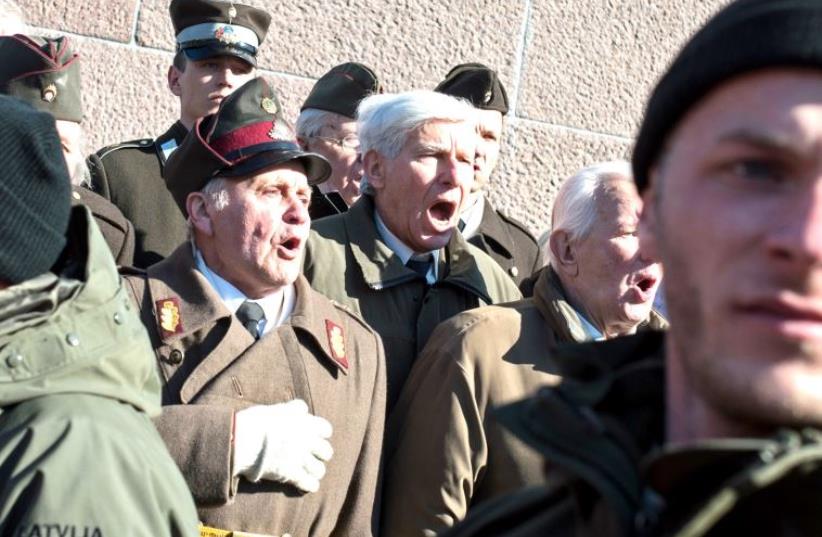 Sympathizers rally at the Freedom Monument in Riga to commemorate the Latvian Legion of the Nazi Waffen-SS, March 2015
(photo credit: ILIYA PITALEV / RIA NOVOSTI / AFP)
Advertisement
Latvian Waffen SS veterans and their supporters, including several members of parliament, are set to march in the capital Riga Wednesday in an event that has become an annual tradition.At least several members of the rightest All for Latvia party will join the parade, which marks Latvian Legion Day – an unofficial holiday honoring those who fought in the anti-Soviet Latvian Legion – a unit of the Waffen SS, according to reports by the Baltic Course and TASS news agency.A counter-protest march is also scheduled to be held.“Wednesday’s march of SS veterans is another example of the systematic efforts of post-Communist Eastern European countries to rewrite the narrative of the World War II and the Holocaust,” argued Dr. Efraim Zuroff, a Nazi-hunter and the head of the Simon Wiesenthal Center’s Jerusalem office.“It is incomprehensible how people who fought for the victory of Nazi Germany, the most genocidal regime in human history, can be honored in a country which is a member in good standing of both the European Union and NATO,” he continued, asserting that reports of parliamentarians participating only added to the outrage.“The Simon Wiesenthal Center has monitored and protested against these marches for several years, and will continue to do so as long as [people] attempt to portray those who fought alongside the forces of Nazi Germany as freedom fighters who supposedly paved the way for Latvian independence.”Zuroff explained that while the unit in question did not participate in Holocaust crimes, many of its members played an “active role” in the liquidation of their country’s Jewish population – as well of Jews from other countries deported to Latvia – prior to their enlisting.Around 67,000 of Latvia’s prewar population of 70,000 Jews died in the Holocaust, he said.According to the Baltic Course news website, many Latvians were forced into service in the Legion and “saw the German army as a lesser of two evils.”“For many of these soldiers, the choice to join the Latvian SS Legion was a result of the brutal Soviet occupation between 1940 and 1941, during which tens of thousands of Latvians were executed or deported to Siberia.Many soldiers naively believed that, if they helped Germany win the war, Latvia might be rewarded with independence or autonomy,” the site asserted.Meanwhile, on Friday, Lithuanian ultra-nationalists are slated to march in Vilnius less than a month after a similar parade in the city of Kaunas in which participants screamed slogans in honor of Holocaust collaborators.“There were the usual nationalistic slogans and they announced that they are honoring the heroes of Lithuania who are being discredited by the enemies” of their country, Zuroff, who attended that event, said in a phone call from Kaunas at the time. “All of those are people who murdered Jews during the Holocaust.”The Lithuanian Jewish community recently demanded that their government release a list of Nazi collaborators which it has declined to disclose.Many former Soviet states, especially in the Baltics, subscribe to what is known as the double genocide theory, in which Nazi and communist crimes are equated and said to be of a similar nature.Ukraine, which last year passed a law honoring members of a nationalist organization which participated in the Holocaust, came under fire in early 2016 after announcing a contest to revamp the Babi Yar massacre site in Kiev in a way that would turn it into a generic symbol of human suffering rather than a quintessential emblem of the Holocaust. The Ukrainian government subsequently backtracked.