The scare spree made international headlines and prompted the president to open his first address to a joint session of Congress with a robust condemnation of antisemitism. 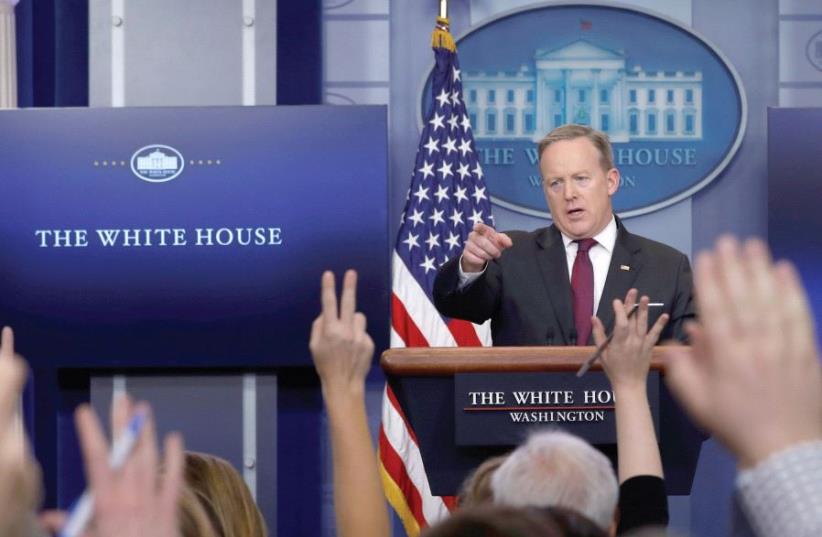 White House Press Secretary and Communications Director Sean Spicer holds the daily press briefing at the White House in Washington
(photo credit: REUTERS)
Advertisement
WASHINGTON – US President Donald Trump was vindicated by the discovery that a Jewish Israeli teenager was behind a slew of bomb threats called in to Jewish community centers nationwide, the White House said on Monday.The president’s press secretary, Sean Spicer, said that his political opponents “rushed to judgment” in assuming that those behind the attacks were likely his supporters.“There was an immediate jump to criticize folks on the Right,” Spicer said.“And it turns out it wasn’t someone on the Right.”Israeli police arrested a 19-year-old individual suspected of using sophisticated software to mask his identity, as he called in fake threats to dozens of American JCCs over the course of two months.The scare spree made international headlines and prompted the president to open his first address to a joint session of Congress with a robust condemnation of antisemitism.“In that particular case, we saw that the president was right,” Spicer continued.“None of them were held to account on that.”Trump was criticized last month for telling state attorneys-general that the calls might be coming from “the reverse” in order to “make others look bad.” The president offered no further context, raising questions in Washington as to whether he had information on the investigation, or whether he was seeking to deflect criticism of his proximity to white nationalist groups.