Saving the Iraqi Jewish Archives: A Journey of Identity, aims to highlight the existence of the archives and the Iraqi Jews who would like to reclaim them. 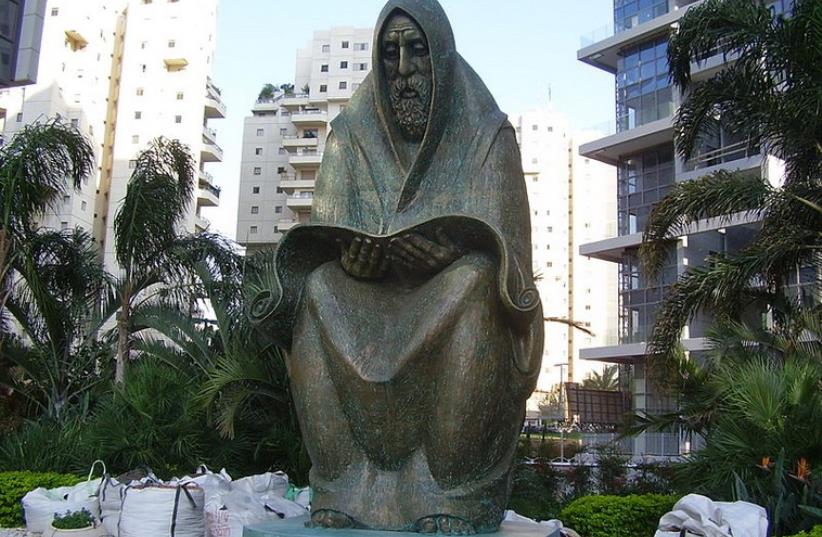 This Monument, ‘Prayer,’ in Ramat Gan, is in memory of the Jews who were killed in Iraq during the Farhud pogrom (1941) and in the 1960s.
(photo credit: Wikimedia Commons)
Advertisement
Seventeen years ago a number of courageous individuals, with the help of US military personnel, entered the flooded basement Saddam Hussein's secret police headquarters in Baghdad and found a miracle: nearly 20,000 personal and religious artifacts confiscated from Iraq's Jewish community, some dating back to the 1600s. The Iraqi government had begun stripping Iraqi Jews of their property in 1952, leading the former owners to believe their treasures had been lost forever. Among the finds: handwritten notes by one of the leading Rabbinical scholars of the early 20th century, the Ben Ish Hai, and the records from the last Jewish school in Iraq, the Frank Iny School. The treasures which had been severely damaged, in part by an unexploded bomb, were rescued and shipped to the US for a ten-year restoration process. But today not only have the archives not been made fully available to the Iraqi Jewish community, the US and Iraqi governments have agreed that within the next year the materials will be returned to a politically unstable Iraq.  A new documentary, Saving the Iraqi Jewish Archives: A Journey of Identity, aims to highlight the existence of the archives and the Iraqi Jews who would like to reclaim them. The fourth in a series of documentaries detailing stories from Iraq's Jewish community, culture and history, produced over the last 25 years by Carole Basri and Adriana Davis of D-Squared Media, the film highlights the stories of those connected with the archives such as the student who found a photograph of himself in his school transcript, and Harold Rhodes, one of the individuals who made the discovery. “This film relies on the personal meaning attached to items that verify an existence: birth, marriage and school records, religious books and artifacts, family photographs, and, most importantly, each person’s right to possess them,” Basri and Davis said.  “When the community decided to speak out publicly, in our previous films, it was with trepidation; but they realized it was an important way to put their lives on the record. Today, they speak with one amplified voice to Save the Iraqi Jewish Archives for their descendants whose ancestry is forever linked to the land between the rivers. With only five Iraqi Jews left in Iraq, now it is crucial.”The filmmakers have called for the archives to remain in the US rather than being shipped back to Iraq. “If this happens,” they said, “there will be little hard evidence for the community to prove they ever existed in Iraq and certainly nothing to cling to for future generations.” Saving the Iraqi Jewish Archives: A Journey of Identity Premieres Sunday, September 13 at the NY Sephardic Jewish Film Festival in New York.