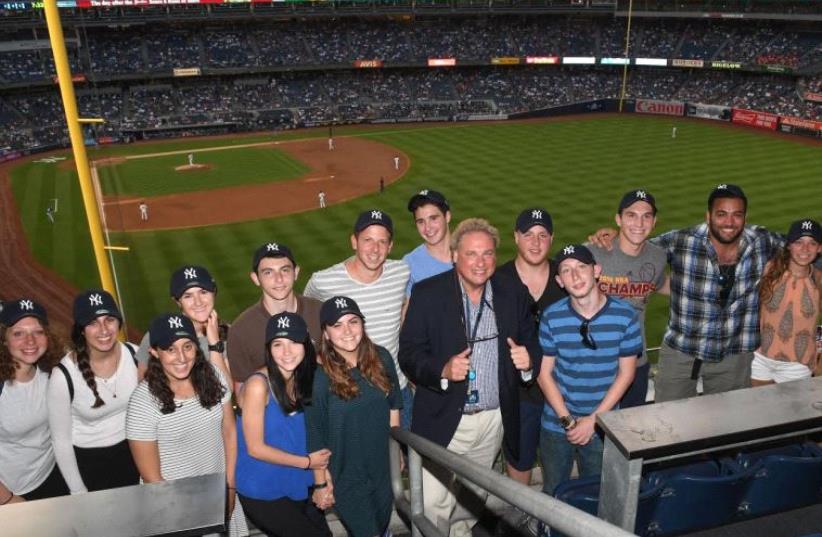 Future IDF lone soldiers with New York Yankees President Randy Levine (Center) and his wife Mindy
(photo credit: SHAHAR AZRAN)
Advertisement
NEW YORK – Some dozen new immigrants and soon-to-be IDF members spent their last night in the US this week at a baseball game as guests of New York Yankees president Randy Levine.“I think that what these young men and women are doing is something really beautiful. They have a lot of courage. It takes a lot of guts to do what they’re doing, and the day before their journey if I can make it a little more fun and get them all together, have them bond a little and just have a good time, then it’s my pleasure,” Levine told The Jerusalem Post. “They have an exciting road ahead of them.”Before dinner in the VIP suite at Yankee Stadium in the Bronx on Monday night, the group went on a private tour of the One World Observatory, from which they got a spectacular last look at New York City before leaving for Israel.
Credit: Shahar Azran“I’m a great believer in Israel. I’m a longtime supporter of Israel,” Levine said.“Obviously, I’m Jewish and I have deep feelings and the defense of Israel is so important. A strong Israel means a strong US. They are intertwined and these folks are going to be on the front-lines to help defend everybody, including me.”The soon-to-be olim and their relatives watched the Yankees play the Toronto Blue Jays just hours before they were to board a plane chartered by Nefesh B’Nefesh (NBN) the next day.It was the third consecutive year Levine has held such an event.Levine’s wife, Mindy, said: “We feel that the more support they have before they embark on the new chapter, the better.We want them to know they’re appreciated, respected, admired and loved. We see them board that plane and watch them with a lump in our throats, knowing that their lives are about to change so dramatically.”The couple stays in touch with many of the soldiers, who become an extended part of the “Yankee family,” said Mindy, who motioned to the IDF belt buckle she was wearing – a gift given to her by a lone soldier. “We feel connected in a way that will hopefully allow them to know that should they feel they don’t have anyone else to reach out to they can reach out to us.”Of the 233 olim who boarded the El Al flight Israel on Tuesday, 75 will be lone soldiers. Half of those preparing to join the IDF are young women.“Every single family and individual we bring to Israel who decides to make aliya is such a special thing for us as an organization, but when you see so many brave young men and women from North America sacrifice so much and voluntarily leave their families because they feel a yearning desire to serve in the IDF and defend Israel, that’s powerful,” said Rabbi Yehoshua Fass, founder and executive director of NBN.Tuesday’s flight was facilitated in cooperation with the Immigrant Absorption Ministry, the Jewish Agency for Israel, Keren Kayemeth LeIsrael-Jewish National Fund, JNF-USA and Tzofim-Garin Tzabar.