The decision prompted immediate celebration from the ultra-orthodox community. 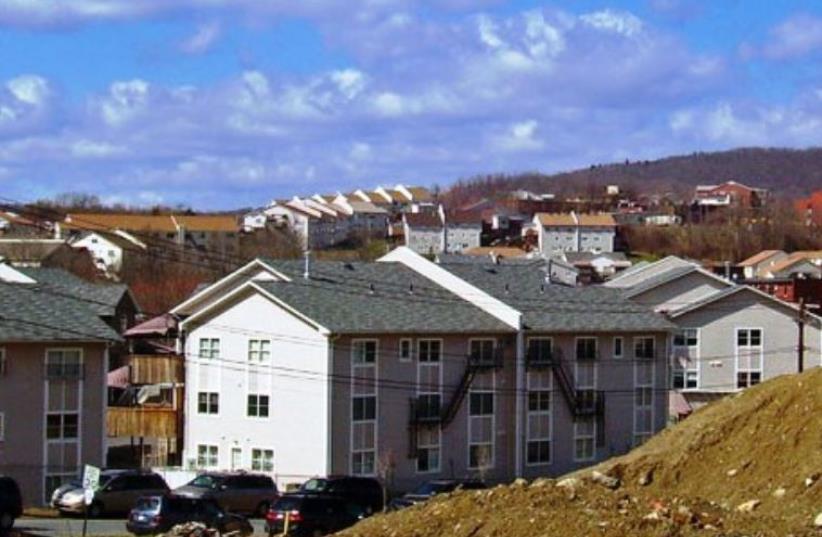 Kiryas Joel, New York.
(photo credit: DANIEL CASE/WIKIMEDIA COMMONS)
Advertisement
Two bills that would have made it harder for the hassidic village of Kiryas Joel to annex undeveloped land belonging to a neighboring village were vetoed by New York Gov. Andrew Cuomo last week.The decision prompted immediate celebration from the ultra-Orthodox community, with a spokesman for the Satmar-dominated town in upstate New York thanking Cuomo for “ see[ing] through the angry rhetoric being advanced” by opponents of the move, according to the Times Herald-Record.The two bills, which would have given county planners control over the annexation, were “a thinly veiled attempt to stop the natural growth of the peaceful, family-oriented community of Kiryas Joel,” the spokesman said.Founded in the late 1970s by Joel Teitelbaum, the grand rabbi of the Satmar hassidic sect, in order to recreate the insular nature of European shtetl villages, Kiryas Joel is now home to more than 20,000 members of the group.It is one of three villages – the others named Monroe and Harriman – comprising the larger town of Monroe.Kiryas Joel’s population has expanded rapidly, and residents have of late turned their eyes on 205 hectares of undeveloped lands belonging to the town of Monroe.Local residents have protested against the proposed jurisdictional change, claiming that allowing the expansion of the super-dense hassidic village would lower the quality of life and damage property values.In response, Satmar representatives have countered that their expansion is necessary, given the high local birthrate.The town has both the highest poverty rate and one of the youngest populations in the United States.The radically divergent lifestyles lived in Monroe and Kiryas Joel also play a part in the tensions. Kiryas Joel is almost entirely residential, and does not have a downtown shopping district. The presence of a local modesty squad and gender-segregated playground have only highlighted the vast chasm separating the communities.Last year, Harley Doles, the Monroe town supervisor, wrote to Kiryas Joel Mayor Abraham Wieder suggesting that the two municipalities split, and that the hassidic village “become its own town.”Opponents of the annexation believe it would result in a rezoning of the transferred territory and pave the way for a rapid expansion of the local population, outstripping the growth of local infrastructure and causing environmental damage.On Friday, Agudath Israel of America, an umbrella organization representing various American ultra-Orthodox groups, issued a statement applauding Cuomo’s decision.“What was especially troubling about these bills was that nobody before had ever suggested that the well-settled annexation process be burdened by additional layers of complicated hurdles,” said Rabbi Chaim Dovid Zwiebel, the organization’s executive vice president. “For some reason, the alleged weaknesses of the existing process were discovered only now in the specific context of a hassidic community seeking to accommodate its organic growth. It is gratifying that Governor Cuomo saw these facially neutral bills for what they really were: an effort to prevent the community of Kiryas Joel from growing,” Zwiebel continued.“As the annexation process will now move forward under the longstanding guidelines of state law, we urge all parties to proceed in a spirit of good faith and constructive cooperation, recognizing the need to accommodate the needs of the growing hassidic community while respecting the rights and sensitivities of neighboring communities,” he added. “The time has arrived for constructive dialogue among all interested parties to help achieve those ends.”