Is this really about greed? 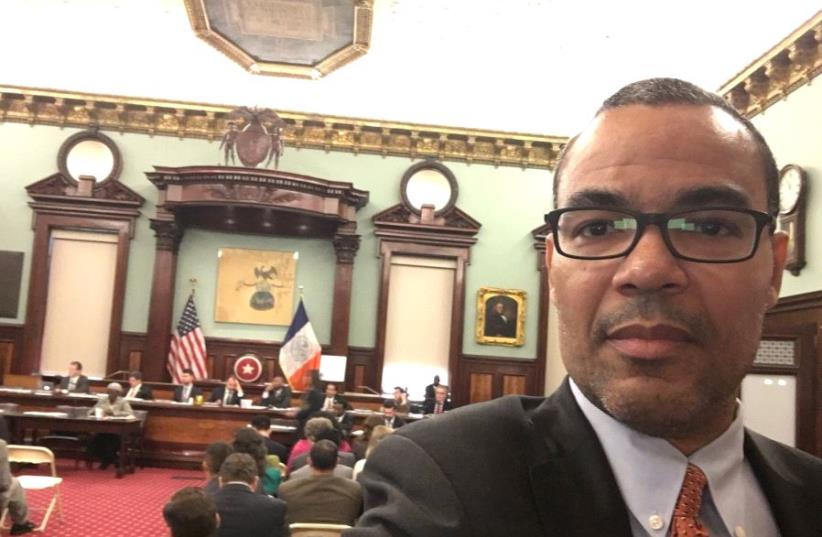 Thomas Lopez-Pierre
(photo credit: TWITTER)
Advertisement
Judging from his web presence, one could assume that New York City Council candidate Thomas Lopez-Pierre is running on a single issue platform: Stop "greedy Jewish landlords.""Jewish landlords OWN 80% of private rental buildings in Upper Manhattan; GUILTY of GREED for pushing Black/Hispanic tenants out," reads Lopez-Pierre's Twitter bio, by way of introduction. And of all photos Lopez-Pierre could have chosen as his Twitter background, he picked one of a man in a kippah in trouble with the law.On his official campaign website, the politician takes these accusations of greed even further, saying that "Jewish landlords" are "at the forefront of ethnic cleansing/pushing Black/Hispanic tenants out of their apartments."The aspiring 7th district democrat elaborates only somewhat on these claims in a campaign video,  in which he stands in front of rival Mark Levine's office, saying, "Together if we organize we can defeat Mark Levine, we can defeat Donald Trump, and we can defeat Jewish landlords who are pushing black and Latino people out of Harlem, Washington Heights, and the Upper West Side... I don't take one dollar in campaign contributions from these greedy Jewish landlords, and Mark Levine has taken over $100,000 in campaign contributions from these greedy Jewish landlords." While this behavior has garnered significant backlash against the candidate, Lopez-Pierre doesn't seem to mind at all. In fact, he frequently re-tweets vitriol flung at him from all directions.


What's more, the controversial candidate started a stealth fundraising campaign claiming to be against him. The "Stop Thomas Lopez Pierre Hate Campaign" on GoFundMe raised $5,871 from people eager to put an end to Lopez-Pierre's hate speech, but it was actually run by Lopez-Pierre himself, who pocketed the funds to put towards his own political war chest. "I call it bait and switch," Lopez-Pierre told the New York Post, perhaps forgetting that the term is used to describe illegal and immoral marketing tactics. "I intend to use the money to pay for my marketing expenses. The people who are doing this [donating] oppose me. I thank them for their support."According to the NY Post, rival Levine spoke out in hopes of Lopez-Pierre's expulsion from the Democratic party. "I absolutely believe he should be removed from the party," Levine said. "We don't want someone in our party who is an antisemite, misogynist and homophobe." Levine also said the fake fundraising page was "a pretty clear case of fraud."Near the end of these videos, Lopez-Pierre makes what is perhaps a Freudian slip. "Together we will defeat the Jewish... Greedy Jewish Landlords."The keyword here is not landlords, nor greedy, it seems. Just Jewish.