Photographer to bring Exodus to life in series of photo shoots

The Song of Miriam conjures a powerful image in the mind, but for internationally renowned photographer Toby Cohen, stimulating the mind’s eye was not enough. 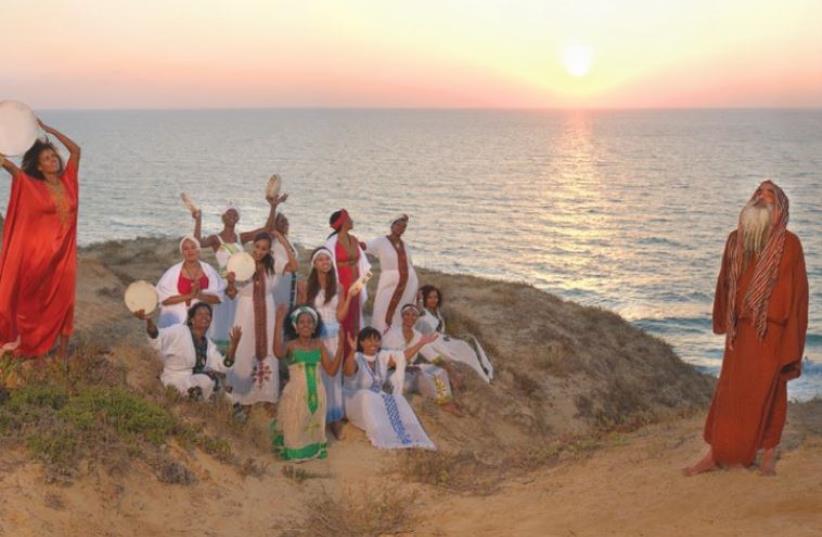 PHOTOGRAPHER TOBY COHEN recreated the Song of Miriam as the first of a planned series of 10 photographs that will bring the stories of Exodus to life
(photo credit: TOBY COHEN)
Advertisement
The Bible records that after the Children of Israel escaped a vengeful Pharaoh and his Egyptian chariots by miraculously passing through the Red Sea, the prophetess Miriam led the Israelite women in song and dance, in celebration of their freedom and in thanks to God.The Song of Miriam conjures a powerful image in the mind, but for internationally renowned photographer Toby Cohen, stimulating the mind’s eye was not enough.Last week, Cohen brought this scene to life, once again, in an attempt to recreate the account of the Israelite women rejoicing in their heavenly salvation, and provide a new look at this fascinating episode in Jewish history.The reenactment of the Song of Miriam is, Cohen hopes, the first of what will be 10 such photo shoots recreating some of the most iconic and central incidents of the exodus from Egypt and the Israelites’ wanderings through the desert, which he is calling the MosesTen Project.For the Song of Miriam, Cohen assembled 40 women, along with his hand-picked Moses actor, and brought them to a high cliff above the Mediterranean just south of Netanya for a photo shoot at sunset in an attempt to recreate something of the mood of awe and inspiration after the escape through what is also known as the Sea of Reeds.For the shoot, Cohen decided to invite only women from the community of Israeli immigrants from Ethiopia, partly as a statement about the diversity of the Jewish people, but also as a means of bringing the community to greater public prominence.Cohen approached women who have attained positions of leadership and achievement in society to serve as the models for his shoot.Oshra Friedman, one of the women who participated who works for the Rashi Foundation assisting the underprivileged in Israel, said the photo shoot of the Song of Miriam with Ethiopian women “would help show the diversity in Israeli society.”“I think this shows the most beautiful view of the community, about powerful women with energy and accomplishments,” said Friedman.“In light of everything that has happened recently, we need to show the good and successful things of the community that we have achieved because it’s not just the other side of the coin.”Speaking to The Jerusalem Post, Cohen, who has works on display in the Tel Aviv Museum of Art, Prince Charles’s private collection, and is represented by the Engel Gallery in Jerusalem, discussed the inspiration behind the broader project, as well as his thoughts behind the first shoot.“Miriam is about female empowerment and leadership,” he said.He said he decided to ask only prominent Ethiopian women to pose for his first photo out of a desire to highlight the success stories of women from this sector of the population, especially in the wake of the demonstrations staged by the community earlier this year against discrimination and for greater acceptance in Israeli society.Moses was modeled by Yonatan Ben-Cnaan, a close friend of Cohen’s, while Miriam herself was portrayed by Cabra Casay, an Israeli singer who has worked alongside Idan Raichel – perhaps testament to the limit of high-minded principles in the face of artistic demands for beauty and youth.Cohen said he initially considered using a more age-appropriate Miriam, but believed Casay’s high profile in Israel and the Ethiopian community would be an additional boon for the project.The Song of Miriam photo shoot is being used to ignite an Indiegogo crowd-funding campaign to raise the funds to stage the nine other events from the book of Exodus that Cohen wants to re-create and photograph – scenes that may involve much larger numbers of participants and support staff which will come at a cost.Each photo will be printed in a 3x1.5-meter format, and the photographer’s hope is that all 10 photos will be exhibited internationally in art galleries and museums.Some prints also will be sold privately.“There are large numbers of people in Israel who study the words of the Torah all day long, but many people find it difficult to interpret those words, or don’t find the text interesting” said Cohen.“If I can turn those words into pictures, if I can bring the Bible to life and bring these stories to life then that’s a very positive thing, and maybe my picture will serve as a starting point for people to explore the Torah.”The inspiration for the project says Cohen is his “obsession” with the varied landscapes of Israel.“I’m always looking for the connection to our land, today, and the stories that tie us to it,” he said. “By creating these images in the Land of Israel today, and tying them to the stories that make up our cultural identity, I’m trying to reaffirm that bond between the Israelite people and the Land of Israel in a visual manner.”