The municipality of Hamburg, following objections from the local Jewish community, allegedly demanded the community pay for demolishing the remains of the synagogue. 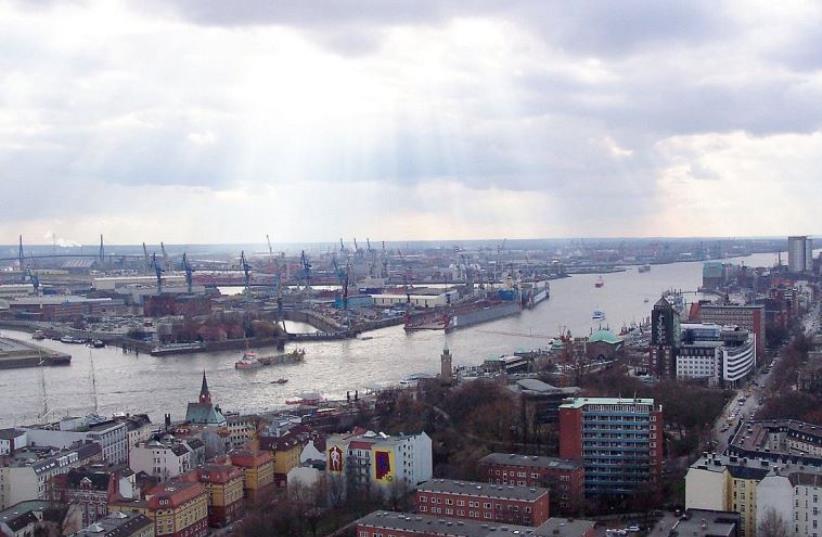 The Port of Hamburg, Germany
(photo credit: SLADER AT THE GERMAN LANGUAGE WIKIPEDIA)
Advertisement
The Jewish community in the German city of Hamburg has raised concerns regarding the rebuilding of a synagogue destroyed by the Nazis in 1938 during Kristallnacht, claiming it's an attempt to hide Germany's past, as reported by the Jewish News on Friday.Once the largest in northern Germany, the Hamburg synagogue was dedicated in 1906 and had a capacity of 1,200 people. The synagogue was later destroyed during Kristallnacht, when Nazis throughout Germany initiated a pogrom against German Jews that resulted in the deaths of dozens and the wide scale destruction of synagogues and Jewish-owned stores. The municipality of Hamburg, following objections from the local Jewish community, allegedly demanded the community pay for demolishing the remains of the synagogue, prior to selling the land back to the municipality.The synagogue was originally located at Joseph Carlebach Platz, but was once known as Bornplatz in the Grindel neighborhood, the location of the city's Jewish community prior to the Holocaust.As of 2021, some 2,500 Jews live in Hamburg, where support for the rebuilding project is largely emanating from local and national government, but with strong opposition from local Jews and those with connections to the pre-Holocaust Jewish community of Hamburg.Among those opposed to the rebuild is Miriam Rurup, a former head of Hamburg’s German Jewish History Institute and current director of the Moses Mendelssohn Center for European Jewish Studies in Potsdam. Similarly, Moshe Zimmerman, an Israeli professor born to a family of Hamburg Jews, told the Jewish News that “they are rebuilding here something that was in the past and erasing the traces [of Nazis crimes].”