Russian-speaking Jews get their day in the sun

“The voice of Russian speaking Jewry is now respectable and people listen now.” 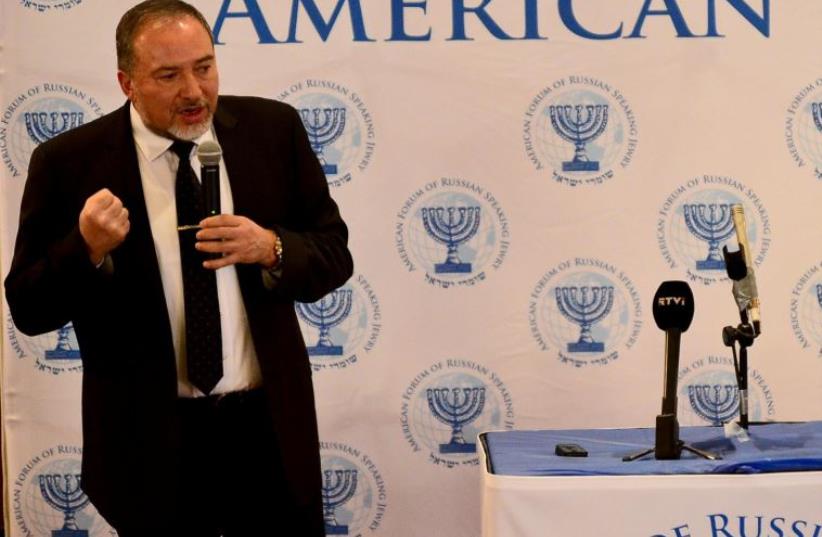 Avigdor Liberman speaks to Russian-speaking Jews in synagogue in Brooklyn, New York in 2014
(photo credit: Courtesy)
Advertisement
Russian-speaking Jews in the West have long felt excluded from traditional communal power structures. But heading into next week’s 37th Zionist Congress in Jerusalem, it seems that this dynamic may be beginning to change.Representatives of World Yisrael Beytenu faction who spoke to The Jerusalem Post have indicated that they believe their situation is improving, citing the 17 delegates from around the world recently elected to represent their movement in the World Zionist Organization’s supreme governing body.In the US, the World Yisrael Beytenu-affiliated American Forum for Israel of Russian Speaking Jewry scored “a major success in the elections to the 37th World Zionist Congress held in the USA, where they won 10 seats in a hotly contested election taking first place after the powerful Reform (56 seats), Conservative (25 seats), Orthodox (24 seats)” factions, said former Jewish Agency and WZO spokesman Michael Jankelowitz.“At the last World Zionist Congress held in 2010 the American Forum for Israel was allocated only two seats.This will be the first time that Russian speakers and émigrés from the former Soviet Union from Canada, Australia and Germany will be represented at a World Zionist Congress.”Jankelowitz asserted that while there about 1.5 million Russian-speaking Jews in the West, “their involvement in the local Jewish institutions is still very low... in no small part due to the opposition they face by the veteran leadership of these institutions, who feel threatened by the Russian-speaking newcomers and their nationalist Jewish ideology, and also fear losing their previous exclusive political and financial clout.”As proof of his assertion, Jankelowitz cited the recent intervention of the WZO’s Zionist Supreme Court in local elections in Australia, in which the internal judicial body “permitted the participation of the Australian Forum of Russian Speaking Jewry in the process towards the 37th World Zionist Congress and faulted the local Zionist Federation of misleading the local Russian- speaking Jewish community regarding membership in the Zionist Federation.”When the forum was launched last year, its president Alex Taube was quoted by Australia’s Jewish News as saying that its goal was to “maintain Jewishness” among Russian speakers.“Although Russian-speaking Jews in Australia have achieved significant professional success, their participation in the social life in the existing Australian Jewish community is negligible,” said Taube.“We dream of Russian-speaking Jews becoming an integral part of the Australian Jewish life,” given their high rate of assimilation.Speaking with the Post, Taube said that his organization has “great relations” with the local Zionist Federation, although he did say that given the many groups vying for a limited number of representative slots, he was kept out on a technicality.“We were strong enough to make our voice to articulate our position,” he said, further asserting that once the court case was done, relations resumed in a cordial manner.“The voice of Russian-speaking Jewry is now respectable and people listen now,” he said.World Yisrael Beytenu CEO Alex Selsky was slightly less sanguine, however, citing what he termed a “lack of openness to share the power.”“When we were in court I said we don’t want charity.We want justice. Stop giving us charity and looking at us as newcomers,” he said. “The Russian-speaking Jews in the west for many years were treated like newcomers who don’t know what community, Judaism and Israel are.”He alleged that roadblocks were put in the way for Russian speakers to vote, adding that while “everybody talks about integrating Russian speakers, when it comes to sharing power and being equal we don’t see it happening.”He cited the example of Germany in which more than ninety percent of the Jewish population speaks Russian but the communal institutions are controlled by “veteran Jews.”“You must understand this isn’t just for the sake of them but for the sake of Israel, because we cannot put in the hands of the veteran communities of the West, especially the Reform and Conservative movements, the leading role in lobbying for Israel. They don’t understand that Israel must be strong first and only then right,” he said.According to Dimitry Shiglik of the American Forum for Israel, he founded his own organization because of a lack of acceptance among American Jews, but now non-Russian speakers are joining him.He said the issue has less to do with discrimination than a “lack of understanding.”“American Jews are very liberal and they don’t want our influence,” Shiglik said. “This is against the right wing.”His sentiments echoed recent statements by party leader Avigdor Liberman.“In light of the weakening of the connection between Jewish communities in the West and the State of Israel, the over-one million Russian- speaking Jews in the West serve as a rising force in the struggle on behalf of Israel. They hold nationalistic and very pro-Israel sentiments and their involvement in central Jewish institutions will undoubtedly strengthen Israel’s position. This also strengthens their Jewish identity, as their connection with Israel constitutes the central basis for their Jewishness,” he said.