The Duke and Duchess of Cambridge were accompanied to the memorial museum by Berlin's mayor. 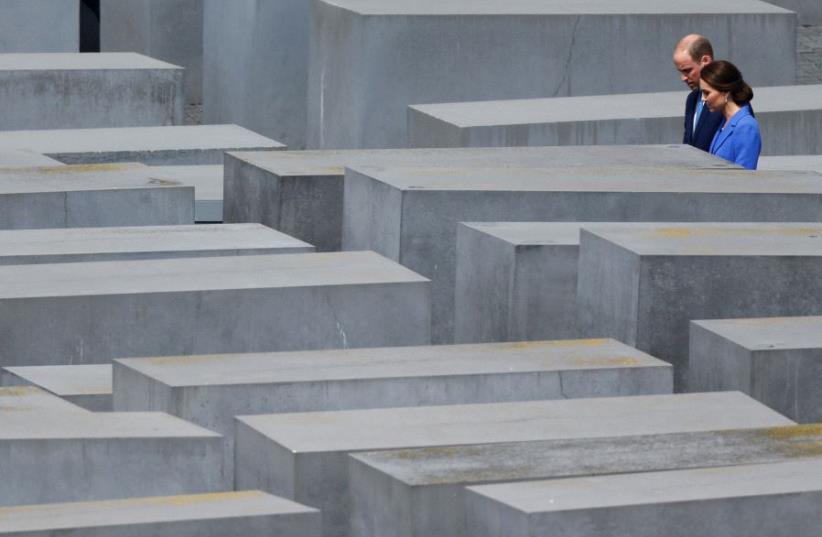 Prince William, the Duke of Cambridge and his wife Catherine, The Duchess of Cambridge, visit the Holocaust Memorial in Berlin, Germany July 19, 2017
(photo credit: HANNIBAL HANSCHKE/REUTERS)
Advertisement
The Duke and Duchess of Cambridge on Wednesday visited the Memorial to the Murdered Jews of Europe as part of a tour of the German capital.
UK royals visit Berlin Holocaust Memorial
The British royals were accompanied to the memorial museum by Berlin's mayor.The couple, who will also visit Hamburg and Heidelberg, will also meet with the German president later on Wednesday.On Tuesday in Poland, Britain's Prince William and Catherine visited the former Nazi concentration camp of Stutthoff, near Gdansk, where 65,000 people were killed during World War II.The pair spoke with Holocaust survivors Manfred Goldberg and Zigi Shipper and signed the visitor book of the former camp. Goldberg and Shipper met in a subcamp of Stutthof and today speak in schools throughout Britain about their experiences.Reports said the royal couple were visibly moved by what they saw, including displays with piles of shoes that had belonged to camp inmates and gas chambers where inmates were killed. They placed stones at the camp’s memorial to its victims, a Jewish custom.As many as 110,000 Jews were imprisoned in Stutthof before Allied forces liberated the camp in May 1945. More than 60,000 people died in the camp.In the guest book, their message read: “We were intensely moved by our visit to Stutthof, which has been the scene of so much terrible pain, suffering and death.“This shattering visit has reminded us of the horrendous murder of six million Jews, drawn from across the whole of Europe, who died in the abominable Holocaust.“It is, too, a terrible reminder of the cost of war. And the fact that Poland alone lost millions of its people, who were the victims of a most brutal occupation.“All of us have an overwhelming responsibility to make sure that we learn the lessons and that the horror of what happened is never forgotten and never repeated.”The royal couple arrived on Monday in Warsaw with their two children Prince George and Princess Charlotte.