Uncertainty undercuts elation as first of 9,000 Ethiopians arrive in Israel

By TAMARA ZIEVE
OCTOBER 10, 2016 14:42
Ethiopian immigrants arrive in Israel
Advertisement
Sixty three Ethiopian olim (immigrants) began their new lives in Israel after arriving at Ben Gurion Airport Sunday night. The flight was scheduled to carry 64 immigrants before a baby in Addis Ababa died several days ago.The arrival marked the beginning of a new wave of aliya from Ethiopia, in accordance with a government decision made in August under which 9,000 Falash Mura will be brought to Israel by the end of 2020, starting with 1,300 scheduled arrivals by the end of 2016. The new plan follows a three-year hiatus after a declaration of the “end of Ethiopian aliya,” which left many families separated. 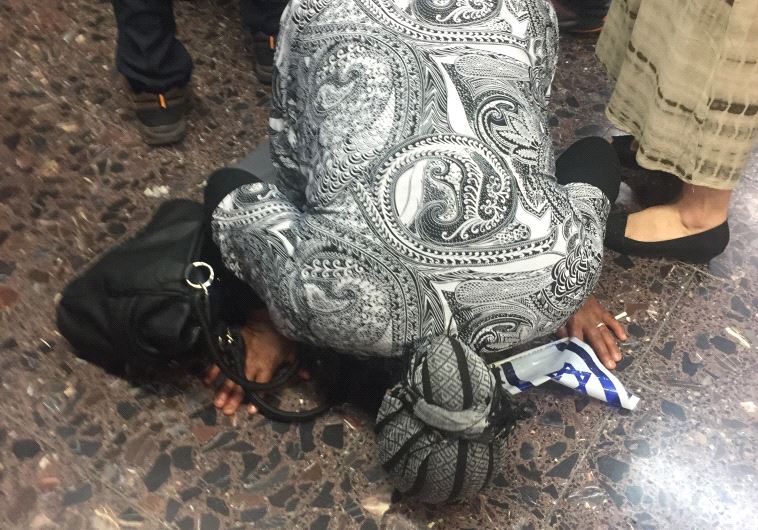 Ethiopian olim arrive in Israel (Tamara Zieve) Falash Mura is the name given to those of the Beta Israel community in Ethiopia and Eritrea who – under compulsion and pressure from missionaries – converted to Christianity during the 19th and 20th centuries.Tears of happiness were shed Sunday night as some of those families were reunited after being apart for more than a decade. For others joy was clouded by uncertainty, as many still have loved ones waiting in Gondar and Addis Ababa, cities hit in recent weeks by violent riots that have claimed dozens of lives. It was reported last week that one Ethiopian Jew awaiting aliya died in the violence in Gondar.Only a limited number of the new arrivals’ relatives were allowed at the welcoming ceremony, as it was necessary to sign up in advance, a requirement of which many were not aware. “This is what I call a political show,” activist Sorafel Alamow wryly told the Post as journalists and cameramen crowded around Immigration and Absorption Minister Sofa Landver. Alamow is part of an on online campaign called the “Struggle for the Aliya of Ethiopian Jews,” which he and other activists launched following the closure of Ethiopian aliya three years ago. Alamow, 22, made aliya 10 years ago and has completed three years of army service.His three sisters and one surviving brother are still waiting to make aliya; another brother died recently from a serious illness.While Alamow expressed mistrust of politicians, he remains determined and optimistic that the remaining Jews in Ethiopia will eventually make it to Israel. “Thank you to all those who helped the aliya of the Ethiopian Jews. We will continue to fight until the last Jew,” he wrote on Facebook.  In a address to the newcomers at Ben Gurion Airport, MK Avraham Neguise (Likud) said he blessed the families who had been reunited after years of separation. “But in the same breath, I don’t forget those who still have family waiting.” 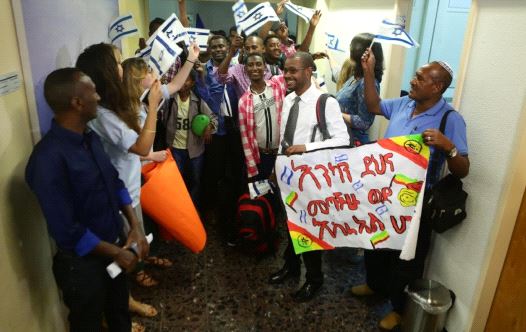 63 Ethiopians arrive in Israel (Zed FIlms) One man told Neguise that he was meeting his daughter after a 12-year wait. That happiness was undercut by the man’s daughter having to wait for her own daughter, who still waits in Ethiopia. “If the parents have the right to make aliya, well their children certainly weren’t inside plastic in the mother’s womb,” Neguise remarked. “They should have brought them together with the parents, and completed this family by family,” he added, saying the responsibility lies with the Interior Ministry.“The government decision from 2003-2010 was to bring only those who are Jewish on their mother’s side, those who are halachically (according to Jewish law) Jewish. They took them out of the Law of Return,” he said. The Law of Return grants the right to immigrate and gain citizenship to anyone with one maternal or paternal Jewish grandparent. Neguise says Ethiopians suffered from “a policy of discrimination,” noting that the same conditions were not applied to immigrants from other countries, such as the former Soviet Union. The governmental response was that such decisions are made according to budgetary concerns. “I think there are clerks in the government ministries making financial considerations regarding aliya from Ethiopia. They say it costs a lot of money to the state. I don’t agree with them,” Neguise said. While he acknowledged that aliya and absorption of olim does cost money, he emphasized that after a year or so immigrants begin paying taxes like any other citizen.
Neguise immigrated from Ethiopia in 1985 and has been instrumental in the cause of the Falash Mura and has accused the government of discrimination.He and MK David Amsalem (Likud) refused to vote with the coalition until a November 2015 cabinet decision to resume Ethiopian aliya was implemented, after being put on hold for budgetary reasons. Both MKs witnessed the first fruits of their efforts at Sunday’s festive welcoming ceremony.  Expressing his sorrow over the deadly terror attack in Jerusalem earlier Sunday, Neguise said it was important to remember – specifically that day – that “aliya is the best way to strengthen Israel as a Jewish and democratic state.” “When I came here 31 years ago I was in the same situation you are in now.” he told the new arrivals. “With some effort, I managed to integrate in society, to get an education and to become a legislator. I believe that every one of you can also integrate and advance in Israel through personal efforts and equal opportunities.” The new olim went from the airport to Safed, where they will be settled and hope to soon be joined by friends and family.
Advertisement
Subscribe for our daily newsletter