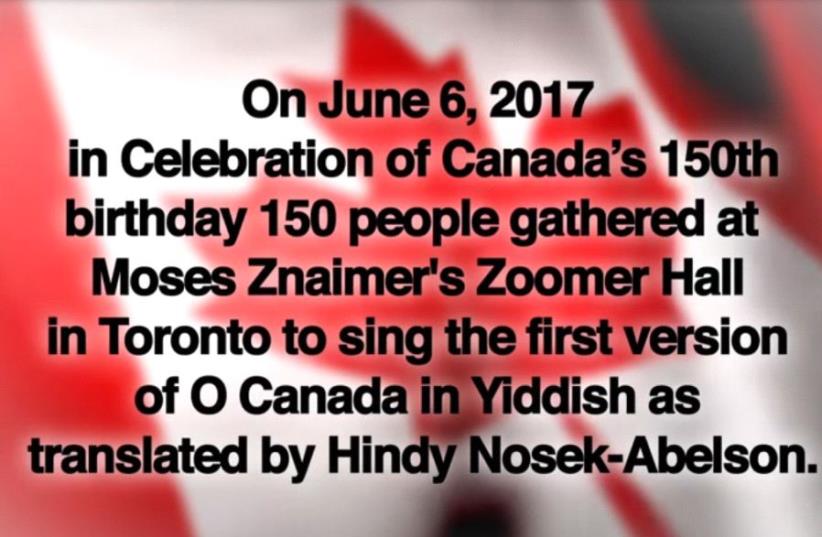 Yiddish O Canada in celebration of Canada’s 150th Birthday
(photo credit: YOU TUBE)
Advertisement
Has anybody ever translated the Canadian national anthem into Yiddish? That simple question from a New York Times reporter last month led – just a few weeks later – to a gathering of 150 people in song in Toronto.And the entire event will be aired on Canadian TV next week, in a show titled The Making of Yiddish O Canada.Hindy Nosek-Abelson, a Yiddish translator living in Toronto, was overjoyed when the request to translate the anthem came to her simultaneously from different people. When she couldn’t find any versions online, she set out to complete the task herself. “‘O Canada’ was done for a different reason than any of the other translations I’ve done,” Nosek-Abelson told The Jerusalem Post in a recent phone interview. “First of all, I thought it was a nice thing to do to put Yiddish on the map,” she said. “But also, because my father would have loved to have sung it in Yiddish.”Nosek-Abelson’s parents, both Holocaust survivors, came to Canada to rebuild their lives after the war. She herself was born in a DP camp, and considers Yiddish her mother tongue.“My father just thought that his country was gan eden [paradise]... I kind of did it with him whispering in my ear,” she said.And once she completed the translation of the relatively short anthem, Nosek-Abelson knew she needed to hear it performed.“Because Yiddish is conceived of as a dead language or a dying language, I want it to be sung by a bunch of people – old and young,” she said.Through a series of connections, they set a date to perform the song at Moses Znaimer’s ZoomerMedia TV studio.“We basically wanted people who could carry a tune,” said Nosek-Abelson. “All kinds of people showed up; we had to close it off at 150 because there was only so much room in the studio.”Indeed those of all ages and backgrounds turned out for the event on June 6, including some local luminaries.Actress Marilyn Lightstone, soul singer Deniece Williams and classical guitarist Liona Boyd were some of the many who came to raise their voices in song – and Yiddish.Of course, many – if not most – of those in attendance didn’t speak the mame loshn.“We sent out the words in transliteration as well as a recording of me speaking the words,” said Nosek-Abelson.“We had quite a few takes..., but I’m amazed that it worked out as well and as quickly as it did.”The event was so unique, that Znaimer chose to turn it into a show on his VisionTV network. The special will air this Monday at 9:30 p.m.local time, featuring not just the song but all that went into creating the event.“I’m a little bit surprised but I’m not completely surprised by the response,” said Nosek-Abelson, of the You- Tube video that has already reached almost 30,000 views. “Because there’s such an emotional attachment to Yiddish, even by people who don’t speak it well.”She said that the translation – and indeed all translations of the anthem, which number over a dozen – speaks to the nature and spirit of Canada.“The unique thing is that Canada, much more so than the United States, doesn’t get the resistance to having the national anthem sung in a different language,” she said. “For them it’s a compliment, it shows respect by all these different cultures – that come here from all over the world – that they sing ‘O Canada’ in their own language.”