Netanyahu to Macron: 'Your struggle is our struggle' against extremism

Netanyahu and Macron spoke during a ceremony commemorating the 75th anniversary of the Vel d'Hiv roundup of French Jews during WWII.

Netanyahu speaks in Paris at the Vel d’Hiv ceremony
Advertisement
PARIS – Prime Minister Benjamin Netanyahu took part Sunday morning in a ceremony in Paris, that commemorated the 75th anniversary of the Vel' d’Hiv roundup of French Jews during World War II. French President Emmanuel Macron also participated in the ceremony, alongside leaders of the French Jewish community, Holocaust survivors, French Righteous Among the Nations, and French WWII veterans. All in all, some 800 people assembled at the Quai de Grennelle, where the Paris velodrome bicycle arena was once located. It was at this site that 13,152 Jewish men, women, and children were rounded up by French police in 1942 -- an especially dark chapter in France’s World War II history. The Jews arrested were confined for four days at the Vel' d’Hiv bicycle velodrome, suffering from inhumane conditions. From there they were deported to Auschwitz. Less than a hundred of them came back.Speaking at the ceremony Netanyahu first addressed the crowd in French, honoring the language spoken by those arrested at Vel' d’Hiv. Netanyahu saluted "my friend President Macron," noting that "the Nazis and their collaborators... shattered the lives of thousands of Jews at Vel' d’Hiv. It seems that the values of the French Revolution -- liberty, equality, fraternity -- these values were crushed brutally under the boots of antisemitism." Addressing Macron specifically, Netanyahu referred to fighting Islamic extremism, stating that "your struggle is our struggle. The zealots of militant Islam, who seek to destroy you, seek to destroy us as well." 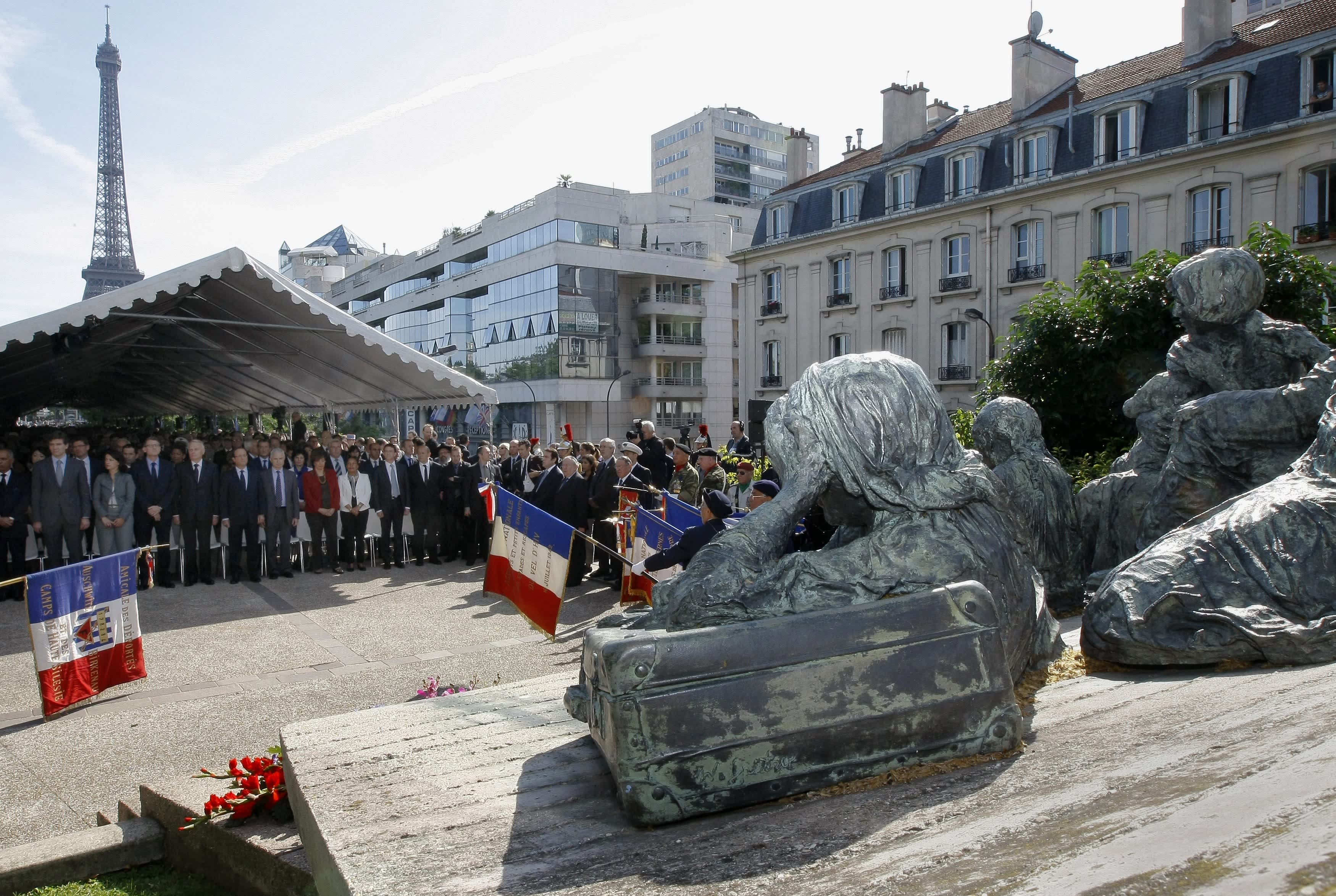 A commemoration ceremony in front of the memorial of the Vel D'Hiv roundup (Rafle du Velodrome d'Hiver) in Paris [File Reuters]
Macron, on his part, spoke in length about recognizing France's responsibility for crimes committed against Jews during WWII. "Not one German" participated in the Vel' d’Hiv roundup, stated Macron. "It was indeed France. And thus 13,152 people of the Jewish faith were dragged from their homes between the 16th and 17th of July 1942 to their death. Among them, 4,115 children between ages of two and six, whom we are especially honoring today."Felix Jastreb was 12 at the time of the roundup. His parents were taken by the French police. He himself was sent to a village called Drouais, in the Eure-et-Loir region, to hide. He told The Jerusalem Post that many in the village knew that he was Jewish, but no one spoke about it. No one denounced him. His parents, on the other hand, were sent to Drancy and from there to Auschwitz. They did not come back. When the war ended, he received a certificate that described his parents as "disappeared." It was only some 10 years later that they were declared dead. Jastreb said, "Macron’s participation today at the ceremony is important, but what was most significant to me over the years was the 1995 speech by then-President Jacques Chirac, publicly recognizing France's responsibility of what happened to French Jews during WWII."Salah Bellouti, president of the Assocation des Anciens Combattant -- the association of resistance members and other French veterans who fought against the Nazis, stated, "I am very moved being here today, 75 years after the Vel' d’Hiv roudup -- a terrible act committed by the French police which we tried to prevent. I am here today to tell all French Jews and Jews around the world ‘Never Again.’ We fought against the Vichy government and its terrible actions. The Jewish community must know that we, the veterans, did not abandon them. And what happened there at Vel' d’Hiv should serve as a lesson to our young generation in France."