Bennett on Nakba Day: No tolerance for Israeli Arabs who promote Palestinian nationalism 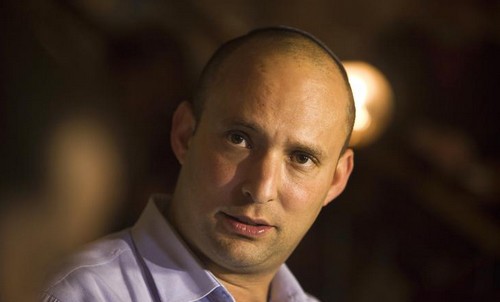 Economy Minister Naftali Bennett spoke out on Thursday against expressions of Palestinian nationalism within Israel, saying, "We need not tolerate Israeli Arabs who promote Nakba Day."Nakba Day, which commenced on Thursday, is an annual day of commemoration on which Palestinians lament the establishment of the Jewish state and the fate of Palestinian refugees from the Israeli War of Independence in 1948. Bennett was quoted by Army Radio as saying, "I do not support any event or organization which promotes the establishment of a national Palestinian agenda in Israel." "This will not be tolerated," said Bennett.Bennett stressed that the government believes all of Israel's Arab citizens are entitled to full equality under Israeli law. However, he stated, those who promote Palestinian nationalism within the state will not be tolerated. MK Jamal Zahalka, the head of the Balad party, told The Jerusalem Post in an interview the day that Nakba Day preparations began on Sunday: “We want to remember the Palestinian Nakba. It is not possible to uproot people from their land and cause a catastrophe and silence our voice... At least we have the right to shout.”Israeli Arabs held Nakba Day protests at Tel Aviv University on Sunday.The demonstrators were met by a smaller counter-protest of students holding Israeli flags, led by the Zionist organization Im Tirtzu (If You Will It). The Im Tirtzu demonstrators called for an alternative Nakba ceremony, which would "truthfully depict the historical facts – that the Arabs sought to destroy the Jewish nation in the 1948 war."On Wednesday night, Palestinians were preparing for the main commemoration events and a march with torches, candle light vigil, was held in Ramallah.

In Gaza the Palestinians organized a day to showcase their heritage in order to teach children about the traditional way of how their ancestors used to live in their land which they hope to return to someday.

"They (the Israelis) say that the old people die and the young will forget, on the contrary we teach our children even the unborn babies we teach them that their land was stolen by the Zionists," said Mnawar Abu Mousa refugee living in a refugee camp in Gaza.

Ariel Ben Solomon and Reuters contributed to this report.