Truce backed by Turkey, Qatar, Egypt, US, according to Channel 2 report; Egypt's Morsi says "some indications" of truce in Gaza, warns against ground invasion; Russo: Israel will continue until rockets destroyed. 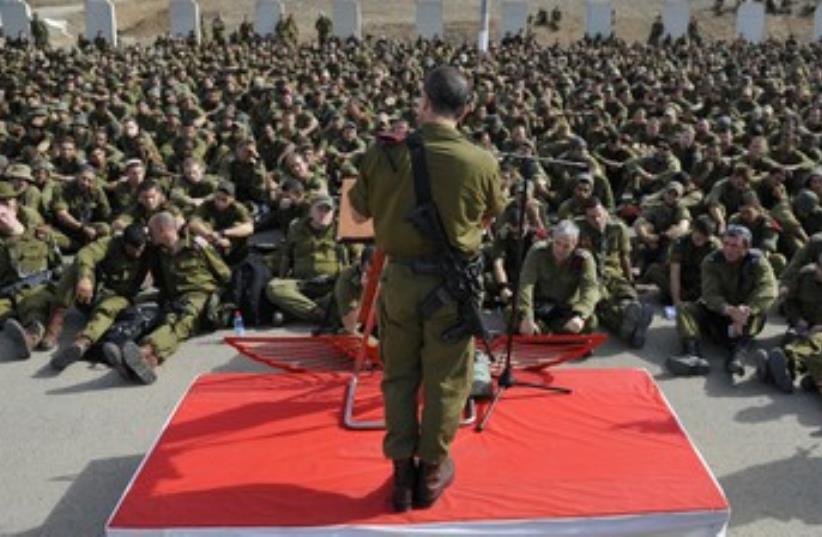 Reserves 370
(photo credit: Courtesy IDF Spokesperson)
Advertisement
Israel is currently negotiating a cease-fire with Palestinians in the Gaza Strip to take effect later in the night, sources told Channel 2 on Saturday night.Egyptian President Mohamad Morsi gave credence to the report, saying there are "some indications" of a cease-fire in Gaza, but that there were not yet any guarantees."There are some indications that there is a possibility of a ceasefire soon, but we do not yet have firm guarantees," Morsi told a joint news conference with Turkish Prime Minister Tayyip Erdogan, who was visiting Cairo."We are striving with all seriousness to stop this aggression, to reach a ceasefire. We call on everyone to adhere to what has been agreed upon, and we hope for an agreement on that at the earliest opportunity," said Morsi.The agreement is backed by Turkey, Qatar, Egypt and the United States, according to Channel 2.For the first time since the current round of violence with the Gaza Strip began on Wednesday, there were signs on Saturday that Hamas was willing to accept a cease-fire with Israel.Hamas leader Khaled Mashaal, who is in Cairo, held talks on Saturday with Mohamed Shehata, head of Egypt’s General Intelligence Service, on the possibility of achieving a cease-fire, sources close to Hamas said.The sources said that the Hamas leadership has received a number of proposals for a cease-fire from different international parties, including EU countries.Mashaal, according to the sources, set his movement’s conditions for a cease-fire.These include an Israeli pledge to stop “all forms of aggression, including assassinations, and lifting the blockade on the Gaza Strip.”The Prime Minister's Office denied reports that Israel had sent an official to Cairo for the negotiations.Just hours earlier, OC Southern Command Maj.-Gen. Tal Russo said Israel will continue the operation in Gaza until it achieves its goals of destroying the arsenal threatening our civilians."During the operation, we have destroyed some of a massive terrorists arsenal aimed at Israeli civilians, and the operation has not yet finished" Russo said. "This operation will continue more than a couple days."

Click for full JPost coverage"There are more than a few Hamas commanders killed, more than a few weapons destroyed, including UAVs," he added. Asked by a reporter if a ground operation was a possibility, Russo answered: "Absolutely."Morsi warned against a ground invasion of Gaza, saying it "forebodes terrible consequences in the region."Senior Hamas officials on Saturday demanded Egypt ease the blockade on Gaza, and asked them to ensure Israel will stop assassinations of Hamas leaders, Palestinian news agency PalToday reported. The Arab League also met to secure a truce that would end Israel's offensive on Gaza.A few hundred Israelis protested against “Operation Pillar of Defense” in Tel Aviv on Saturday night, calling on the government to reach an immediate ceasefire with Hamas in Gaza.