By elana kirsh
JUNE 9, 2012 02:21
Numbers Crunch 311
(photo credit: Mrkay Design)
Advertisement
Gay pride was trending in Tel Aviv on Friday afternoon, as tens of thousands took part in the annual Gay Pride March. According to Twitter mapping site Trendsmap, the term #pride was dominant in the entire Gush Dan region for several hours, followed by terms #israel and #telaviv. The previous day, a pre-Pride album on The Jerusalem Post’s Facebook page pulled record engagement as the most popular post of the week. 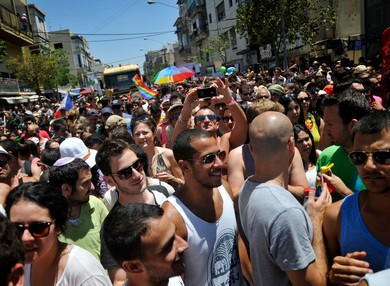 Sticking with social media, a recent study by the Pew Research Center found that an increasing amount of adults are using micro-blogging platform Twitter on a daily basis. According to the study, 15 percent of adults online in the US use the site and 8% do so every day. The PRC also noted a positive correlation between smartphones and Twitter usage, which may account for the rise.In other social media news, a video by Jerusalem Post reporter Gil Shefler, who was beaten by a mob in Greece, drew over 40,000 views on YouTube in less than two days.Moving to traditional news channels, a separate PRC study pulled together news interest statistics from 2012 so far, and found that American interest in foreign events has dropped sharply compared to the previous year. In 2011, historic events such as the Japanese tsunami and nuclear disaster and the killing of Osama bin Laden kept Americans glued to international issues, whereas in the past five months the US Presidential election and the state of the country’s economy were of more interest.The top international story of 2012 so far, a cruise ship accident of the coast of Italy in January, had 30% of Americans tuned in “very closely”and 70% “less closely.” Tensions between Israel and Iran, which spiked in February, drew attention from 26% of respondents. By way of comparison, the Japanese disaster had 55% of Americans following the story “very closely.”Statistics from JPost.com, however, tell a different story, despite the fact that over half of readers hail from the US. This week on the site, the most-read stories were almost entirely focused on regional issues, spanning developments in Egypt, continuing violence in Egypt, and the Iranian nuclear threat.
JPost Top Five most-read stories: 1. Mubarak faces 'health crisis' after guilty verdict
2. 'Syria military intervention would engulf Israel'
3. IDF soldier, terrorist killed near Gaza
4. 'Israel’s creation worst catastrophe to hit world'
5. US think tank: Iran site buildings 'completely razed'On the talkback forums, meanwhile, readers were commenting more on diplomatic stories, such as the stalled Israeli-Palestinian peace process and ongoing dialogue over the 2010 flotilla affair.JPost Top Five most-active threads: 1. Palestinians: US refugee bill may delay peace
2. PA to honor suicide bombers, terrorists
3. FM cites US precedent for refusing Turkey apology
4. IDF soldier, terrorist killed near Gaza
5. Thousands of Turks rally on anniversary of flotilla
Two wrap up, the magic SMS numbers on the Post’s talkback forums this week is 712,000 - the amount of messages it would take to text all of the comments on the site to a friend.From news sites to blogs, tweets to videos, The Numbers Crunch is a weekly column which zooms out and brings you the big picture online, from Israel, the Middle East and around the world, and poll results from JPost.com.The writer is the Internet desk manager at The Jerusalem Post
Advertisement
Subscribe for our daily newsletter