As the year draws to a close, JPost readers vote on women’s issues and Egyptians tweet Tahrir.

By ELANA KIRSH
Numbers Crunch 311
(photo credit: Mrkay Design)
Advertisement
The year 2011 is fast drawing to a close, and media the world over have started publishing yearly reviews, featuring lists and galleries, wrap-ups and predictions. Among them, JPost.com has compiled a series of shortlists and polls for the top stories of the year, the results of which will be published next week. In the meantime, The Numbers Crunch takes a look at the raw data, to understand what made 2011 for JPost readers.
Top 11 most-read stories of 2011:1. Rocket fire increases; IDF may deploy Iron Dome soon
2. Muslim Brotherhood: ‘Prepare Egyptians for war with Israel'
3. 'Die Welt': Iran building rocket bases in Venezuela
4. Farrakhan: Jews are pushing the US into war
5. Cairo: Anger starting to focus on Israel, US -
6. Muslim Brotherhood text reveals scope of radical creed
7. Palin at Kotel tunnel: Israel too apologetic
8. Iranian FM says Bushehr nuclear plant is operational
9. PM slams Obama call for ‘Palestine’ based on ’67 lines
10. Exclusive photos: Bieber finally visits the Western Wall
11. ‘We know that Netanyahu cannot sleep now’These stories span a variety of notable events from the past year such as the Arab Spring, rocket fire on the South and Iran’s nuclear progress. In the 10th spot, the list boasts exclusive photos from The Jerusalem Post’s photographer, Marc Israel Sellem, of a somewhat less serious nature – Canadian pop icon Justin Bieber’s visit to the Western Wall. Also on the list, notably, were two in-depth pieces from Jerusalem Post reporters Melanie Lidman and Ben Hartman, who traveled to Cairo to cover the unprecedented protests there earlier in the year.Which leads us to the next Top 11 list, the top Jerusalem Post reporters, columnists and feature writers, according to how many readers checked out their author pages:Top 11 JPost author pages of 2011 1. Caroline Glick
2. Yaakov Katz
3. Herb Keinon
4. Gil Hoffman
5. Judy Siegel-Itzkovich
6. Lahav Harkov
7. Elana Kirsh
8. Yaakov Lappin
9. Ben Hartman
10. Barry Rubin
11. Nadav Shemer Elsewhere online, YouTube put together its own series of “Top 10s,” some of which were more serious and newsworthy than others.A particularly interesting feature was YouTube Trends: One Year Later, which celebrated a year since the video-sharing site’s blog was launched by looking at the most-viewed posts. Three of the 10 featured posts were actually lists of 10 themselves, in keeping with the end-of-year theme. Among the videos mentioned was this memorable gaffe by Texas Gov. Rick Perry, in which he stumbled when asked to name agencies that he would eliminate if elected US president:Also noted on the YouTube list, unsurprisingly, were videos related to the killing of Osama bin Laden. This playlist alone garnered almost two million views.Also worth checking out is YouTube’s top political videos of 2011, if you’re that way inclined, featuring US President Barack Obama’s comedy routine at the White House correspondents’ dinner, which pulled a whopping nine million views, and various political soundbites and ads.

Jumping medium to Twitter, Israelis were quiet online this week, unlike our Egyptian neighbors south of the border. Around Cairo it was like a flashback to March 2011, with the tags #Tahrir and #Egypt dominating the region. 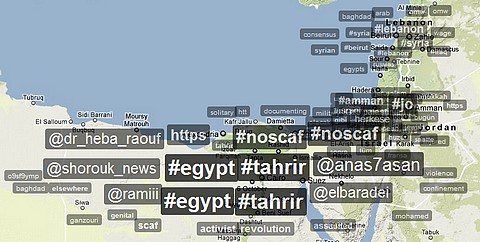 In other news, a JPost poll taken on women’s rights in Israel earlier this week pulled a surprisingly strong response, with over 3,000 readers voting. The vast majority, over 45 percent, voiced concern over attempts to segregate buses and hide women, responding to hot stories in the Israeli press in previous weeks.

This interest, however, was not reflected in the most-viewed stories of the week. Instead, as is often the case, readers showed more interest in diplomatic issues, this week focusing on a back-and-forth between Prime Minister Binyamin Netanyahu and The New York Times. Three of the top five articles from the past week, a news stories, a letter, and an editorial, examined the story.JPost Top Five most-read stories:1. Netanyahu to ‘New York Times’: Take a hike
2. PM adviser's letter to ‘New York Times’
3. ‘Technical problems, not Iran, downed drone’
4. Fatah declares ‘war’ on normalization with Israel
5. Editorial: Friedman is wrongOn the talkback forums, however, the scuffle had not yet made the most-active threads, with readers instead commenting on a range of diplomatic stories. As has been the trend in recent months, two of those stories concerned Iran’s nuclear threat, and two looked at the Palestinian statehood bid.JPost Top Five most-active threads:1. Danny Yatom: ‘Strike fallout can never be as bad as nuclear Iran’
2. Congressmen seek probe into PA use of US funds
3. Iceland votes to recognize Palestinian state
4. Panetta: Strike on Iran must be the last resort
5. Obama defends Israel policy at NY fundraiserLast up, JPost’s Top 11 countries in terms of readership, followed by the top cities. While overall, US readers far outnumbered Israeli readers (almost five to one), the single city with the highest readership was Israel’s second largest city, Tel Aviv (including Ramat Gan and Givatayim). As an Aussie I was interested to see that both Sydney and Melbourne made the list, despite relatively small Jewish populations, and that five of the top 11 countries were non-English speaking.JPost Top 11 countries 1. US
2. Israel
3. Canada
4. UK
5. Australia
6. Germany
7. France
8. Netherlands
9. Sweden
10. South Africa
11. BrazilJPost Top 11 cities1. Tel Aviv
2. New York
3. Toronto
4. Los Angeles
5. London
6. Jerusalem
7. Chicago
8. Montreal
9. Melbourne
10. Sydney
11. San FranciscoFrom news sites to blogs, tweets to videos, The Numbers Crunch is a weekly column which zooms out and brings you the big picture online, from Israel, the Middle East and around the world, and poll results from JPost.com.The writer is the Internet desk manager at The Jerusalem Post.
Advertisement
Subscribe for our daily newsletter