Tired of eight days of mess and the effort involved in making latkes? Try these freezing tips and all of these latke recipes for a delicious Hanukka.

By GOURMETKOSHERCOOKING.COM
NOVEMBER 27, 2013 10:14
Classic Potato Latkes
(photo credit: Courtesy)
Advertisement
There are few things that people enjoy eating day after day, but I think no one tires of eating latkes for eight days in a row. But as the latke maker, I tire of the mess and effort. So last year, I tested numerous freezing latke methods to come up with the best latke freezing tips so that I could make latkes on a few of the nights and freeze some for the others. My family and guests were thrilled and no one noticed that they were not fresh each day. Try these freezing tips and all of these latke recipes for a delicious Hanukka.Latke freezing tips:   - Cool completely before freezing in any container
- Line a loaf pan with wax paper  - Place latkes on their side, not flat, this will keep them from tasting greasy when reheated.
- Undercook the latkes just a bit. If you cook them too much they will burn when reheated.
- Reheat them from the freezer (they get wet when defrosted in the refrigerator so don’t defrost them). Place frozen latkes on a cookie sheet in a preheated 400 degrees F oven. Bake UNCOVERED for 10 to 12 minutes or until heated through.

Classic Potato Latkes
Makes about 20 latkes4 potatoes, peeled
1 large onion, grated
½ tablespoon lemon juice
1 tablespoon seltzer
4 eggs
3 tablespoons flour
1 teaspoon salt
Fresh ground pepper to taste
Vegetable oil  Applesauce (optional)
Sour Cream (optional)Grate the potatoes, using a processor or a fine shredder. Immediately transfer them to a large bowl and add the onion, lemon juice, eggs, flour, seltzer, salt, and pepper to taste. Mix well.In a large heavy skillet, heat 1/8 inch of oil. With a tablespoon, spoon the batter into the hot oil and flatten the latkes with the back of the spoon. Cook for 3 to 5 minutes a side, turning only once, until golden brown. Drain on paper towels and then serve immediately with applesauce, sour cream, or dipping sauce. 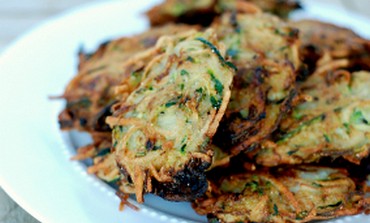 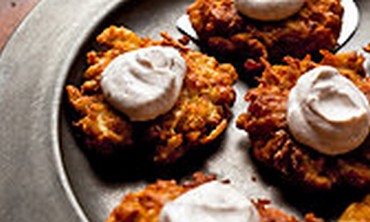 Homemade Applesauce with Pears
Makes 3 cups7 apples (Granny Smith and any others you have lying around), cut into chunks  2 pears, cut into chunks
¼ cup light brown sugar
1 cinnamon stick
½ teaspoon cinnamon
1 teaspoon vanilla extract
½ cup apple ciderPlace all ingredients in a large stockpot over a low to medium flame. Simmer for about 20 minutes until apples are soft, stirring every five minutes. Remove from flame and mash with a potato masher to desired consistency. Store in refrigerator.These recipes were brought to you by www.gourmetkoshercooking.com
Follow @JPost_Lifestyle
Advertisement
Subscribe for our daily newsletter