Getting in gear for the new year

By GOURMETKOSHERCOOKING.COM
SEPTEMBER 2, 2012 14:34
Pumpkin soup
(photo credit: Courtesy)
Advertisement
It’s impossible to put it off any longer. It’s time to start cooking for Rosh Hashana. Here are some of our favorites – new and old – that will help get you in the mood.Spiced Pumpkin Soup2 tablespoon olive oil
1 onion, chopped
1 garlic clove, chopped
1 tablespoon chopped fresh ginger
1 small red chile, seeded and finely chopped
2 tablespoon chopped fresh cilantro
1 bay leaf
1 (28 ounce) can pumpkin or a 2 pound fresh pumpkin, peeled, seeded and diced
2 ½ cups vegetable stockHeat the oil in a pan over medium heat. Add the onion and garlic and cook, stirring, for about four minutes, until slightly softened. Add the ginger, chile, cilantro, bay leaf, and pumpkin and cook for another 3 minutes.Pour in the stock and bring to a boil. Using a slotted spoon, skim any foam from the surface. If using fresh pumpkin, reduce the heat to a simmer, stirring occasionally, and simmer for about 25 minutes, or until the pumpkin is tender. For canned pumpkin, just simmer for 15 minutes. Remove from the heat and take out the bay leaf, and let cool a little.Transfer the soup into a food processor or with an immersion blender, process until smooth. Return the mixture to the pan and season to taste with salt and pepper. Reheat gently, stirring. Remove from the heat and pour into warmed soup bowls. Garnish each one with a swirl of parve cream.Beef tagine with butternut squash
Serves 4 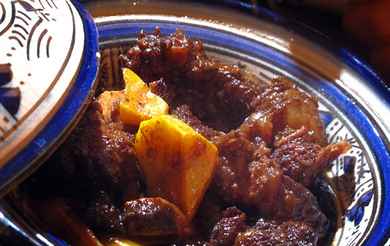 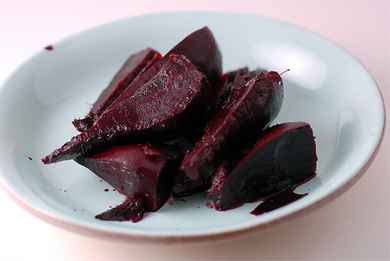 Wine-braised beets (Courtesy)2 bunches, medium beets
12 shallots, peeled
3 tablespoons olive oil
½ dry red wine
Salt and pepper to taste
3 tablespoons light brown sugar
3 tablespoons red wine vinegar Preheat oven to 375 degrees. Peel the beets and cut each one into eight chunks. Mix the beets and shallots together in a 13 x 9-inch baking dish. Toss the olive oil and red wine and season with salt and pepper. Cover the dish tightly with aluminum foil and bake until the beets are just tender, about 1 ¼ hours. Stir in the brown sugar and red wine vinegar. Bake uncovered stirring occasionally until the vegetables are tender and glazed with the sauce, about 15 to 20 minutes more. Pomegranate Cheesecake (Parve) 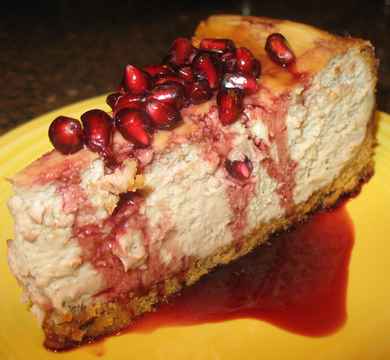