The Danielle Prize for Medicine with a Heart was established in memory of 20-year-old Danielle Sonnenfeld who volunteered to help sick children but died in a fatal road accident.

Surgeons and other hospital specialists involved in diagnoses and live-saving treatments of patients tend to get the most attention. But general practitioners – who are the first to see patients in distress on a year-round basis and serve as “gatekeepers” to refer them to specialists if necessary – get less attention and acclaim.

The Danielle Prize for Medicine with a Heart provides GPs with such recognition. It was established in memory of 20-year-old Danielle Sonnenfeld, who volunteered to help sick children but whose plans to study medicine were dashed by a tragic and fatal road accident in 2015.

The Danielle Sonnenfeld Foundation was established by her businessman father, Motti Sonnenfeld, with the aim of promoting “Medicine with a soul; medicine with a heart.” In 2016, the first year of the prize, parents of children in pediatric cancer wards around the country were asked to recommend a doctor or nurse who in their opinion represent the most humane kind of medicine.

Since then, the effort has expanded to GPs – and this year also to pediatricians. Over 425,000 Israelis voted for 5,500 outstanding physicians they knew, and 12 of them were chosen to receive the Danielle Prize at a Jerusalem ceremony on Sunday. 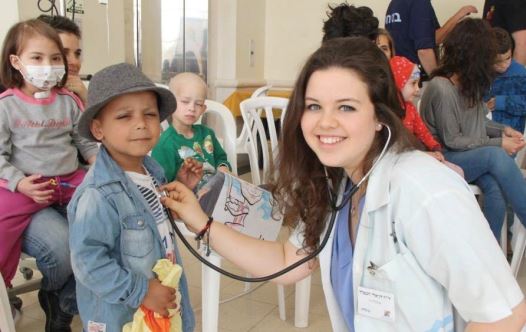 Born in Rio de Janeiro, Danielle immigrated to Israel with her family and lived in Ra’anana. Every place she studied, she excelled in her studies and was a favorite of teachers and friends. Doing her national service in the oncology department of Schneider Children’s Medical Center in Petah Tikva, she was able to bring a smile to the tormented faces of the sick children and their families. She decided to dedicate her second year of service to at-risk youth in the city of Acre, and also traveled from Acre to Schneider to continue volunteering in the oncology department.

Danielle made personal connections with all of the patients. When she spoke to the young children about conquering their illnesses, it was never “you.” Instead, she always said: “We are going to get over this.”

To date, more than 100 projects have been established in her name and memory in the fields of health, education, welfare and society – in Israel, Asia, Europe and Brazil.

They include helping couples from disadvantaged families; providing services for women exposed to family violence; helping young couples cover their wedding costs; an online Bible class in Hebrew open to the public; Jewish studies in her birthplace in Brazil; a Jewish library in Milan; help to couples undergoing in-vitro fertilization; support for a bone-marrow databank; encouragement of high-risk girls to perform national service; bar/bat mitzvah ceremonies in Israel for youngsters from Europe and blind Israeli youths; and social support for prisoners’ families.

These are the 12 recipients of the 2021 Danielle Prize: