Green shakshuka with feta: Even better than the original?

A new way to make the classic shakshuka. 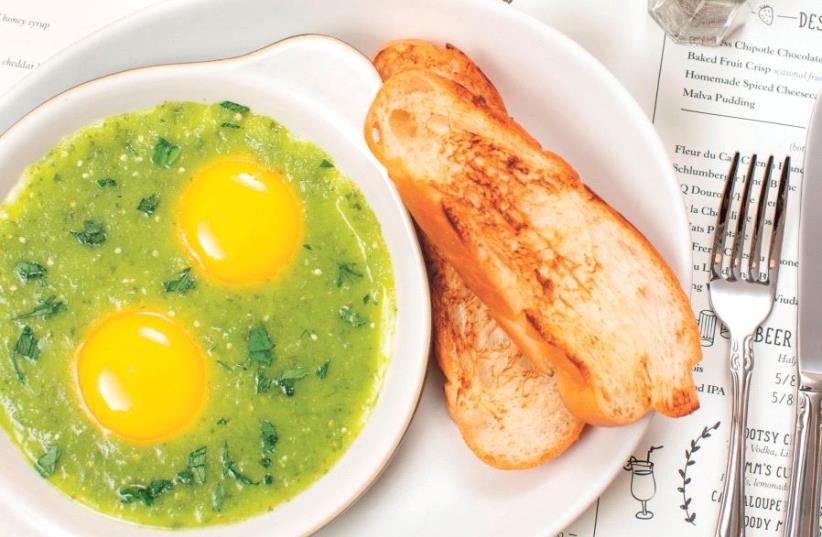 This recipe originally appeared on The Nosher.

If I’m hosting brunch, it’s a pretty sure bet that I’ll make shakshuka. Saucy, spicy and runny with egg, it’s a universally beloved dish that, to its credit (and my eternal disappointment), never yields leftovers when I make it, a sure testament to its popularity.

I make my regular shakshuka with fresh tomatoes and peppers, which leaves me in somewhat of a bind come wintertime, when neither are in season. Rather than use canned vegetables (they have their place; shakshuka is not it) I’ve started making a green shakshuka. It isn’t exactly authentic, but it’s deliciously herby, spiced with serrano chile, cumin and paprika, and full of invigorating leafy greens.

I love spinach here — I frequently eat it with eggs on toast — but I’ve also made this with kale, collard greens and Swiss chard, all of which you could substitute for the spinach. You can also control the spice level — if you like putting harissa in your red shakshuka, try serving this with the Yemenite hot sauce zhug. Alternatively, you could omit the serrano chile, or use only half of it, for a milder bite. This is a shakshuka that lends itself to endless adaptations.

This shakshuka gets finished in the oven. I find it gives you slightly more control over the texture of the eggs. That being said, if you like your yolks very runny, keep a close eye on it.

I finish it with salty crumbles of feta, a shower of fresh parsley and dill, and a sprinkling of pepper and sumac. Serve with toasty sourdough or fresh pitas and dig in while the yolks are still runny.

Directions: 1. Preheat the oven to 375 F. and position an oven rack in the center.

3. Add the onion and cook for 4 minutes, until softened. Add the garlic and cook for another minute, until fragrant. Season with the cumin and paprika.

4. Add the diced jalapeño or serrano, and let soften, 1-2 minutes. Add the chopped spinach and the remainder of the olive oil, and cook until it begins to wilt, about 2 to 3 minutes. Turn off the heat.

5. Using a wooden spoon or spatula, create 5-6 wells inside the bed of greens. Crack an egg into each well.

6. Bake the shakshuka for 6-8 minutes, until the egg whites are settled. If you like very runny yolks, start checking the eggs at around 4 minutes. The eggs will cook quickly.

7. Remove from the oven and season with salt and pepper to taste. Top with the crumbled feta. Sprinkle with sumac and aleppo pepper, and top with fresh dill. Serve with pita or sourdough. Serves 3-4.