The Post’s original idea, not yet implemented, was to require a sticker to be affixed in the car in order to renew one’s vehicle license. 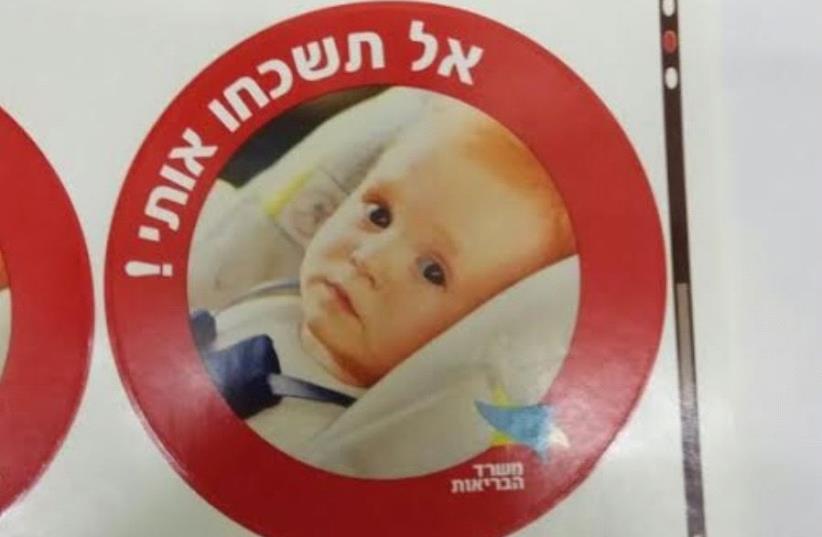 Health Ministry launches Post campaign to save kids from dying in hot cars
(photo credit: HEALTH MINISTRY)
Advertisement
The Health Ministry has printed up 200,000 stickers to be affixed in vehicles to save infants and toddlers from being left in hot vehicles – an idea first proposed by The Jerusalem Post eight years ago.The idea was suggested by this reporter to then-deputy health minister, and now health minister Ya’acov Litzman, but he rejected it out of hand, saying it “wouldn’t work.”But the Knesset Special Committee for the Rights of the Child endorsed it four months ago, realizing that any electronic gadgets to prevent deaths would take years for Standards Institution approval. Then the ministry decided to adopt the sticker idea to raise awareness among drivers.The Post had brought the idea in 2010 to Eli Beer, founder and president of United Hatzalah, who was immediately enthusiastic and spent his own money to launch a UH campaign within a week. Over the years, and with sponsorship from an insurance company, Beer printed more than 500,000 stickers in a dozen languages from Hebrew and Arabic to Yiddish and Amharic. Beer said the stickers were very successful in preventing drivers from leaving children in vehicles and in much demand both in Israel and in California and Florida, where high temperatures also put youngsters at risk.The ministry’s stickers, in Hebrew or Arabic only and showing a child and urging drivers to “Never Leave Me Alone,” are meant to be affixed under the window on the inside of the driver’s side, near the door lock, or on the horn inside the steering wheel, to remind drivers not to leave a child inside a vehicle, even for a moment. One can also affix the photo of one’s child or grandchild in the circle on the sticker.It took the ministry four months to plan and design its sticker campaign, even though one small child has already died a few months ago when left by her forgetful mother, a nurse, in the car. On Wednesday, a baby at Kfar Chabad was rescued and hospitalized after being left in a parent’s vehicle for many minutes. Last year, seven children died of hyperthermia and burns when left in vehicles unattended; dozens have perished in similar accidents since Litzman first received the Post’s proposal.The stickers, designed by the State Advertising Authority, are being distributed at well-baby centers and health fund clinics and included in Israel Hayom newspapers starting on Friday. One can also order them from [email protected] Some 200,000 more will be printed and handed out at vehicle licensing bureaus as well. Newspapers including the Post and others in Arabic and Russian will have ministry ads about the stickers.The Post’s original idea, not yet implemented, was to require a sticker to be affixed in the car in order to renew one’s vehicle license.
Sign up for the Health & Wellness newsletter >>