Some 8,000 Israelis who smoke or are exposed to smoke die per year, and the cost of treating victims of smoking costs billions of shekels annually. 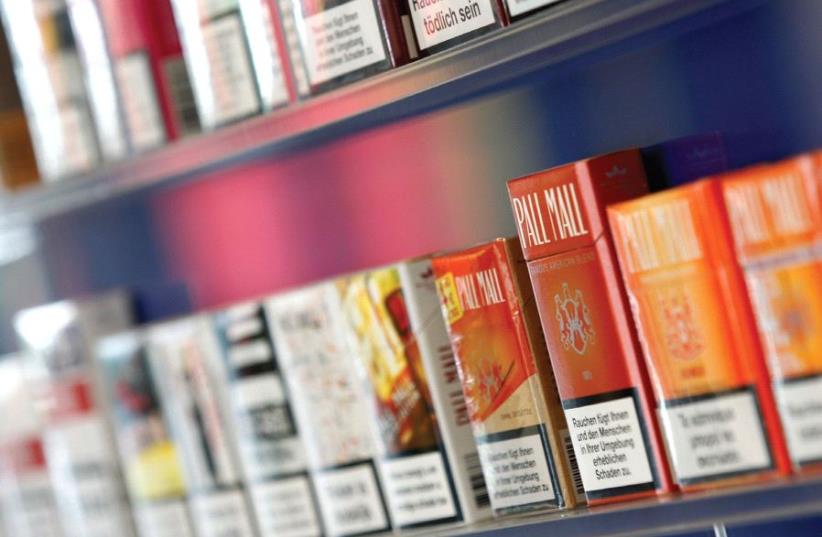 ‘THE TOBACCO industry attempts to impede tobacco regulation have changed over the years, but have not abated – they have instead mutated, and on a global scale.’
(photo credit: REUTERS)
Advertisement
The Knesset approved a preliminary reading of a private member’s bill limiting the advertisement and marketing of tobacco products, but only in the electronic media and not in printed newspapers.While the Israel Medical Association, the Public Health Physicians Association, the Medical Society for the Prevention of Smoking and the Israel Cancer Association welcomed the vote by a large majority (49 in favor, four against and two abstentions) and said it would save lives, the organizations called for expanding the legislation to include the print press. They also demanded that, despite strong opposition by Finance Minister Moshe Kahlon, prices for all tobacco products, including rolling tobacco and heated tobacco products, be equalized and raised, that no-smoking laws be expanded and enforced, and that the purchase of tobacco be prohibited to those under the age of 21.Former health minister MK Yael German objected to the bill’s limiting only online media, saying that “This law is a surrender to the written press. The press has to remove this disgraceful clause,” she demanded.According to press reports, exempting newspapers from a ban on tobacco advertising was part of the coalition’s agreement initiated by United Torah Judaism, which sent Deputy Health Minister Ya’acov Litzman to the government as health minister until his recent resignation over Shabbat issues. Litzman has voiced support for requiring tobacco companies to only put ads for their product in newspapers along with information against smoking.The amendment to the prohibition on advertising in the electronic media was introduced by MKs Eitan Cabel, MK Yehudah Glick and others. They noted that although a ban on advertising for tobacco products violates the freedom of expression of tobacco companies, taking into account the serious damage to public health and the consequences of these damages, the general prohibition on advertising of this kind and the restrictions on the marketing of tobacco products are proportionate.
Some 8,000 Israelis who smoke or are exposed to smoke die per year, and the cost of treating victims of smoking costs billions of shekels annually.Cabel said: “This law is about life and death, no less. As a former heavy smoker, I feel a real mission to change the law and save those who think they understand the significance of smoking. The struggle to cancel advertising on the Internet and social networks is aimed at the younger generation, who consume most of their information through these platforms.”Amos Hausner, the head of the Israel Council for the Prevention of Smoking and a leading anti-tobacco lawyer responsible for decades of writing anti-smoking legislation, said last month that a ban on ads in newspapers was vital, especially since the Hebrew papers that accept cigarette ads don’t write much against smoking. He maintained that the Internet ban is also weak because, as with spam, it is merely the default position; people who enter websites and give their explicit permission could still see tobacco ads even if the bill is approved.