Identifying the condition promptly can be followed by treatment that saves lives. 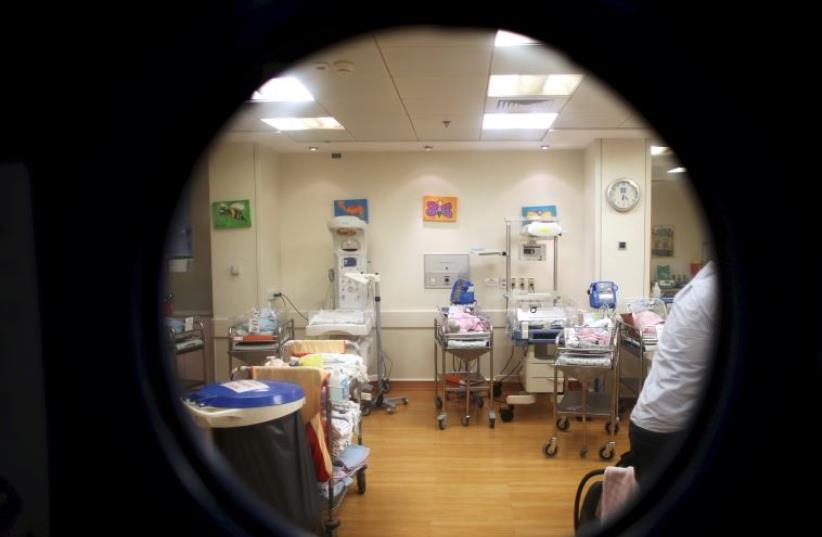 Cribs for newborn babies are seen through an window at a nursery in a hospital in Jerusalem, September 10, 2015.
(photo credit: REUTERS/Ronen Zvulun)
Advertisement
In what’s been deemed breakthrough research, Tel Aviv University researchers have discovered molecular biomarkers in the blood for preeclampsia, a sudden pregnancy complication that can interfere with blood flow by the placenta and possibly to the fetus, leading to low birth weight, prematurity and even death.It is also a leading cause of maternal deaths.Their work – led Dr. Noam Shomron and Prof. Moshe Hod and conducted by Liron Yoffe of TAU’s Sackler School of Medicine and in collaboration with Prof. Kypros Nicolaides of King’s College in London – could lead to an early diagnostic blood test.Identifying the condition promptly can be followed to treatment that saves lives. Their research was just published in a 23-page article in the journal Scientific Reports.“Up to 8% of pregnant women may contract preeclampsia during their second or third trimester,” Shomron said. “This is a serious disease that endangers the health, sometimes even the lives, of the mother and the fetus. We don’t know what causes it, but preeclampsia, if caught in time, has a simple and proven remedy – low doses of aspirin administered from the 16th week until the end of pregnancy.”Until now, gynecologists have assessed a woman’s risk of preeclampsia by referring to previous pregnancies, blood pressure levels and other general symptoms. “But we sought a definitive biomarker that appears in a patient’s blood as early as the first trimester, before any symptoms appear,” Shomron explained. “Our findings form the basis for a simple blood test that would predict preeclampsia and, in turn, allow doctors to provide treatment that would prevent the very onset of the disease The samples recently collected from other countries – Italy, Spain, Russia and in particular Israel – will be used to apply our findings collectively to patients from around the world,” said Shomron.The researchers examined the blood samples over a period of six years from thousands of pregnant British women in their first trimester. The team then narrowed their focus to 75 specific blood samples – 35 taken from women who eventually contracted preeclampsia and 40 taken from those who completed their pregnancies in good health.The researchers extracted the RNA molecules (snippets of molecular information present in human cells) from the plasma of the samples and sequenced these using Next Generation Sequencing. The scientists discovered the new biomarkers by analyzing the data using computational methods that included statistical analyses and machine learning algorithms.“We identified 25 small RNA molecules that were differentially expressed between the preeclampsia and the control groups. Based on those RNA molecules, we then developed a model for the classification of preeclampsia samples,” said Yoffe. “These findings indicate the predictive value of circulating small RNA molecules in the first trimester and lay the foundation for producing an early, noninvasive diagnostic tool for preeclampsia, which could reduce the life-threatening risk for both the mother and fetus.”Hod added that the new research followed a global trend, that seeks to establish pregnancy tests in the first trimester, as opposed to today, when most tests are performed in the last three months of pregnancy.”As president of the European Association of Perinatal Medicine and chairman of the International Federation of Obstetrics and Gynecology committee that deals with maternal and offspring health, Hod is leading a global effort to develop diagnostic techniques to improve prediction and prevention of complications like gestational diabetes, preeclampsia and preterm birth in the first trimester of pregnancy.“Early testing or prediction will allow doctors to safeguard the health of mother and fetus alike. It will also facilitate, if necessary, early preventive interventions to improve maternal and offspring’s outcome,” Hod said.