Some Jews and historians have accused Pius of not doing enough to stop the Holocaust.
A top rabbi and at least one other prominent community memberhave announced they will not attend the synagogue visit in protest. Andthe tension, which comes on the heels of other mishaps inJewish-Catholic relations, has raised fears of demonstrations, althoughboth sides insist they will not let the event be marred by controversy.
Jewish leaders from around the world have traveled to Rome forthe German-born Benedict's third visit to a synagogue as pope afterseeing ones in Cologne, Germany, and New York.
He will be following in the steps of hispredecessor, Pope John Paul II, who became the first pontiff to setfoot in a synagogue when he visited the monumental synagogue in Romenear the Tiber River in 1986. 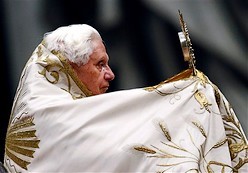 "It will be a meeting of peace, friendship and mutual respect,"said Rome's chief rabbi, Riccardo Di Segni. "But above all it will bean example of how to coexist even if we have differences."
Cardinal Walter Kasper, the top Vatican officialin charge of relations with Jews, said "problems and difficulties willbe open until the last day of history," but "the visit will not speakabout the problems, but about what we have in common."
Last month, Benedict sparked outrage among some Jewish groupsby signing a decree on Pius' heroic virtues, paving the way for him tobe beatified once a miracle attributed to Pius' intercession isconfirmed. Beatification is the last formal step before possiblesainthood.
Some Jews and historians have argued that Pius, pope from1939-1958, was largely silent on the Holocaust and should have donemore to prevent the deaths of 6 million Jews at the hands of the Nazisand their collaborators.
Among the victims were more than 1,000 Roman Jews who weredeported in 1943 from the old Ghetto neighborhood by the synagogue,across the river from the Vatican.
Piero Terracina, one of about a dozen survivors of the deportation, said he would not attend Benedict's visit.
"I am convinced that if that pope had come out, had made asingle gesture, the Roman Jews would not have been deported, but thatdidn't happen," Terracina was quoted as saying by the Corriere della Sera newspaper.
The Vatican insists Pius used quiet diplomacy to try to saveJews and that speaking out more forcefully would have resulted in evenmore deaths.
Kasper, speaking to reporters this week, reiterated theVatican's position that the beatification was an "internal question ofthe Church" and had to do with the "spiritual judgment" of Pius, nothis historical role.
Before entering the synagogue, the German-born Benedict isexpected to pause in the adjacent square where the Jews were rounded upfor deportation.
Rabbi Arthur Schneier, who hosted Benedict's New York synagoguevisit in 2008, said he respects those made uncomfortable by thebeatification moves, but told The Associated Press that "one should notparalyzed by the past, one has to move on."
Other disputes that have strained Jewish-Catholic relationsinclude Benedict's rehabilitation of a Holocaust-denying bishop lastyear and his 2007 decision to revive the old Latin Mass, which includesa prayer for the conversion of Jews.
Schneier, a Holocaust survivor who converses in German withBenedict, noted that in each case the pope and the Vatican had soughtto issue clarifications or correct mistakes, showing that Benedict wasacting in good faith.
"I don't think the pope would deliberately bring about missteps and then find himself correcting them," Schneier said.
Advertisement
Subscribe for our daily newsletter