Tribute to the perished, Kaczynski to be held at start of ceremonies. 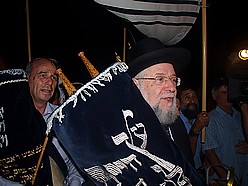 The march will proceed as planned despite the death of Polish President Lech Kaczynski in a plane crash in Russia on Saturday.As part of the march, organizers will hold a tribute to Kaczynski and the rest of those who perished in the crash, at the beginning of Monday’s ceremonies at Auschwitz-Birkenau.Dr. Shmuel Rosenman, chairman of the International March of the Living, said on Sunday, “All 10,000 of our participants this year, representing Jewish and non-Jewish communities all across the world, will join in the sorrow of the Polish people as they solemnly march.“President Kaczynski was a true friend of Israel and the Jewish people whose death represents a terrible loss for this country [Poland] which has so remarkably recovered from the horrific tragedies of World War II.”Sharansky said, in a statement released by the Jewish Agency on Sunday,“The March of the Living strengthens Jewish identity, individually andcollectively.“Growing up, I knew little about the Holocaust, because the Sovietauthorities did everything to prevent us as Jews from creating anidentity. The March of the Living is a show of the force and unity ofthe Jewish People,” said Sharansky, who spent more than 10 years inprison as a Soviet dissident.Former Israel Chief Rabbi Lau survived Buchenwald as a child.The March of the Living brings thousands of students from dozens ofcountries to Poland each year to learn about the Holocaust, and wasfirst held in 1988.
Advertisement
Subscribe for our daily newsletter