Taught by a world renowned caramelier they learned the intricate skills needed to make lollipops, candy sticks and hard candies. 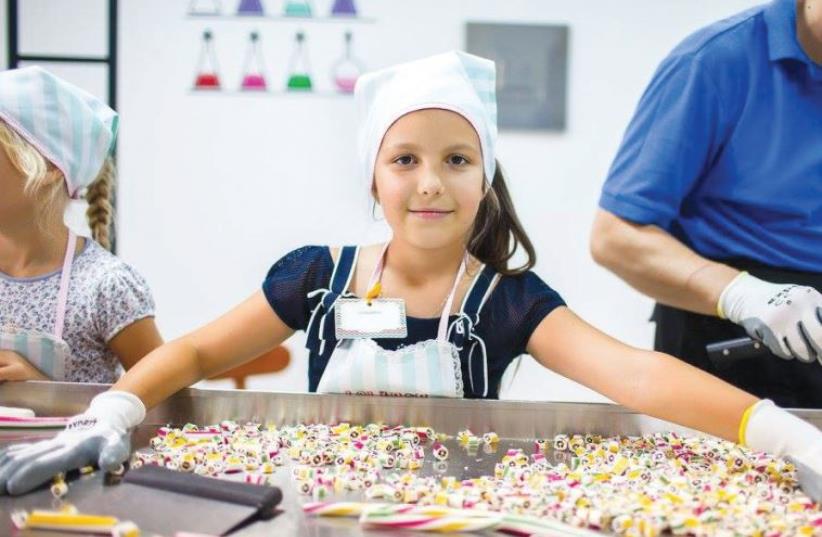 Once the candies begin to harden, children are given special hot gloves so they may mold them
(photo credit: LOL & POP)
Advertisement
Finding the right birthday activity for my daughter was a challenge. Keeping in mind that I wanted it to be something unique that would entertain my older boys as well, I looked for something even I had never done before – and was prepared to venture outside Jerusalem.That’s when I heard about LOL & POP. Once I saw their website I was hooked! Recent olim, Igor and Kate Levitan opened their shop in Ramat Gan three months ago and have already taught over 100 master classes – a unique interactive workshop for ages six and up. LOL & POP also specialize in creating customized candies which become special corporate gifts and a welcome addition to the bar/bat mitzva sweets table.

So how did the Levitans get involved in candy?
Before making aliya, Igor was a food technology professor and his wife, Kate, was an auditor for a large corporation. Moving to Israel with their young daughter was an opportunity for a major career change. They began training over a year ago to become carameliers, the term for a professional candy maker.Taught by a world renowned caramelier they learned the intricate skills needed to make lollipops, candy sticks and hard candies or what they refer to as caramel candy with inscriptions, logos and custom images.Where does the name LOL & POP come from?
LOL&POP is a play on words, which forms the word lollipop – referring to the colorful and flavorful hard candies on a stick. LOL is an abbreviation for “laugh out loud” and is used to express laughter. Their hard candies taste delicious, look colorful and when people see them they always smile.The abbreviation POP is short for “popular.” Putting the words together conveys the message that LOL & POP makes popular sweets that create smiles.The master class
We walked into the spotlessly clean candy store and were greeted by Igor and Kate with huge smiles on their faces. As my kids looked around and saw the selection of candies, lollipops and homemade marshmallows it didn’t take long for them to say, “This is amazing!” Igor and Kate had chosen watermelon as our flavor of the day to celebrate the beginning of summer. We could smell the sweet flavor in the air as we watched the liquid caramel boiling in the pot.After pouring the steaming hot caramel on to the candy-making table, Igor began adding different natural ingredients to create different colors. You would be amazed to find out what they use for red, green or yellow. I would tell you... but that’s part of the fun of coming to a master class.Once the candy began to harden the kids were given special hot gloves to wear so they could start molding the candy. The trick to making beautiful candy is to keep rolling it. As the kids rolled the candy into lollipops and candy sticks it took me back in time to the days when I used to go to Disneyland and salivate at the candy shop window filled with jars of different flavored candy sticks.Using watermelon as our theme, the couple taught the kids how to create hard candies in the shape of an actual watermelon using different colors to represent the skin and seeds. The master class included lollipops, candy sticks and a creative jar of small hard candies. My kids had fun, learned about making candies and came home with some great treats to share with their friends.

When will LOL & POP come to Jerusalem?
The Levitans are currently working on a traveling candy show. With specialized equipment they can take their master class on the road and Jerusalem will be one of their first stops. This will be one of the first traveling candy shows in the world. Until then you will need to head out to Ramat Gan to experience a LOL & POP Master Class and I can tell you that it is worth every minute.Special offer
As a special offer to In Jerusalem readers, LOL & POP is offering a price of NIS 100 person until August 31 (instead of NIS 130). Be sure to mention The Jerusalem Post.