‘Macbeth: in motion’ turns Bloomfield Park into a movable stage. 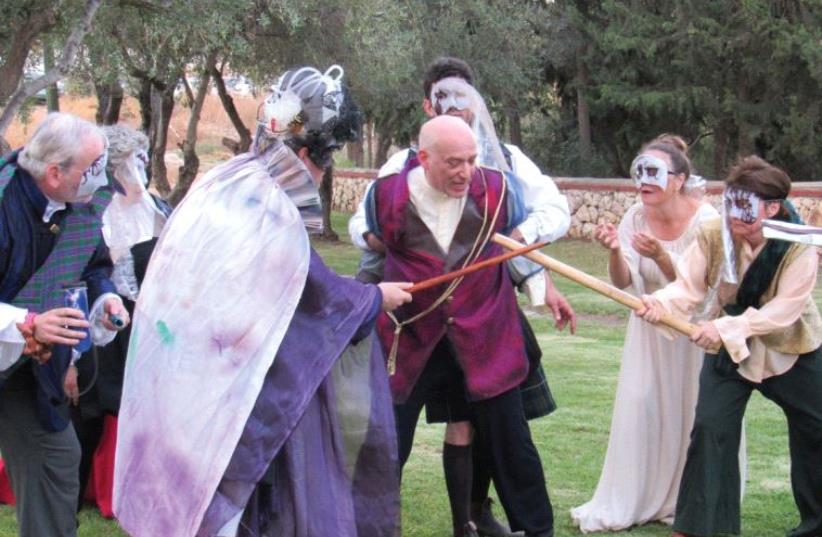 Bringing the famous words ‘Double, double toil and trouble; fire burn and cauldron bubble’ to life
(photo credit: KAREN FELDMAN)
Advertisement
Theater in the Rough was founded in 2010 by Beth Steinberg, in conjunction with her eldest son and another friend. Steinberg modeled it after similar projects that she saw in New York, before making aliya.“Being a New Yorker, to me, summer means free, outdoor theater,” Steinberg says. “Not just Shakespeare in the Park; there are many other, smaller projects.The whole idea is to have Shakespeare outside, often in more informal settings.We knew of a company called New York Classical Theater, and they were really our mentors. They would start a production on the west side of Central Park, and throughout the show, the audience would run around the park. It’s called ‘panoramic theater.’” Using panoramic theater as her guide and adapting it to fit her needs, Steinberg has been directing shows in Bloomfield Park for six summers (with a hiatus in 2015). Past productions include Twelfth Night, Romeo and Juliet, Much Ado about Nothing, Richard III, A Midsummer Night’s Dream and now this summer’s Macbeth.“I try to go between history, comedy and tragedy,” Steinberg adds.This year presented some challenges to the seasoned artistic director. Her eldest son is now studying theater in Tel Aviv, so he is no longer producing. But the main issue was how to make a tragedy move at a swift enough pace that the story wouldn’t become too heavy for the audience.This is where the script adaptation became crucial. Steinberg and her two leading actors, Macbeth, played by her husband, Ira Skop, and Lady Macbeth, played by Annabelle Landgarten, collaborated on an adaptation that retained the heart of the story’s drama, as well as all of the quotable, flowery lines, while maintaining forward motion.“You need Macbeth to die at the end in a good, quick, and sturdy fashion, so that people get that satisfaction and so that the kids can still enjoy it,” Steinberg states.All of Theater in the Rough’s actors and crew are volunteers. The organization does not currently receive funding from the municipality or from local NGOs, making it a truly grassroots, community- supported endeavor.“Our actors are very devoted to their work, but everyone has a day job,” Steinberg explains. “You have to guide them through this process, get them to peak at the right moment, and work the play.”With community theater, especially theater that changes locations multiple times in a park, setting the tone for the audience is crucial. Bagpipes help tremendously in this regard, as well as innovative costume design from Bayla Lewis, whom Steinberg has been using since 2013. The other critical element for Steinberg was Bloomfield Park itself.Using the park as a stage, and including eight location changes in total, Steinberg was determined to get the best out of the vista.“Given that the park is our stage and people who come every year know the park, how do you make it look different for them? How do we recreate the space? That made it really fun.”

‘Macbeth: in motion’ is in Bloomfield Park every night at 5:30 p.m. until August 25.
More information: theaterintherough.co.il
Advertisement
Subscribe for our daily newsletter