Searching for a summer activity?

Israel ScaVentures began in Jerusalem, and now runs 15 routes around the country. 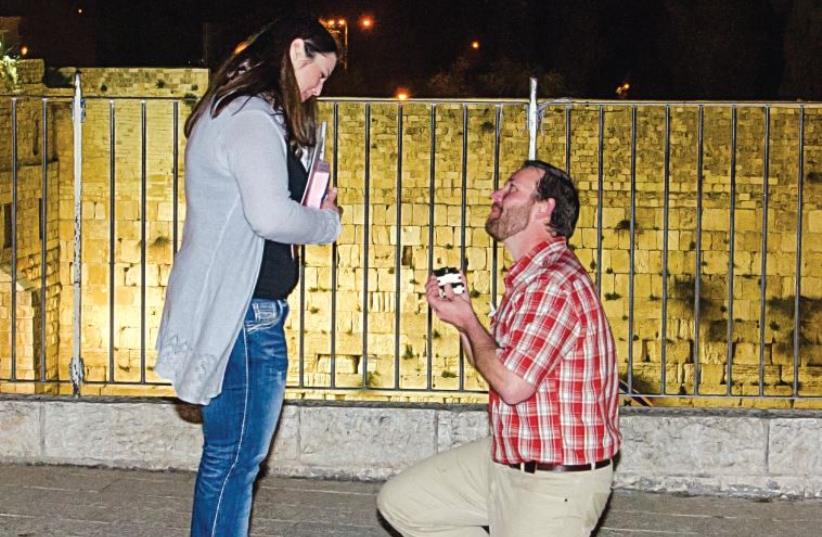 A man proposing marriage in front of the Western Wall at the end of an Israel ScaVentures scavenger hunt.
(photo credit: COURTESY ISRAEL SCAVENTURES)
Advertisement
Scavenger hunts are all the rage in the tourism industry right now, and there is a good reason for that.Hunts are a fun way to keep kids interested, enjoy an interactive activity, challenge a group to work together and learn about a historical location, all at the same time.A scavenger hunt is a game in which participants find a list of specific items, perform tasks or take photographs of the requested items. Each task takes you to a different station within a set area; the goal is to complete all the tasks and get to the finish line first.Tali Tarlow of Israel ScaVentures used her educational experience to create a scavenger hunt business in Jerusalem. Her hunts are not only for kids and teens; Tarlow’s customized hunts have included a wedding proposal pursuit and a country-wide quest for a large family visiting Israel from the US.I sat down with Tarlow to hear more about how she got started and how her business has grown.
When did you start running scavenger hunts?Israel ScaVentures just celebrated our fifth anniversary. When I began it was called Jerusalem Scavenger Hunts, as we started with two routes in Jerusalem. Today we run around 15 routes all over Israel, and have worked with more than 10,000 participants in four different languages.We have had participants from the US and UK, South Africa, Australia, South America, France and Holland; we have had Jews, Christians and even Druse. Israel ScaVentures gives participants the gift of an amazing and inspiring time in Jerusalem [and across Israel].
How would you compare a scavenger hunt to a traditional tour of a neighborhood?A scavenger hunt is an interactive way to experience a neighborhood, its history and inhabitants. In a hunt, each member of the team is an active participant.Divided into teams, each member gets a role – such as guide, detective, scribe or navigator. Each role comes with its own tasks – whether it is reading to the team members about the sites they are visiting, navigating the team from one station to the next or looking out to find pictures on the way.The story of the neighborhood touches participants in different ways, and sometimes stays with them longer than if they were just participants on a traditional tour. Accordingly, the motto of Israel ScaVentures is: To Educate. To Engage. To Inspire.
Tell us more about the wedding proposal hunt and custom bar/bat mitzva hunts?We have done two proposal scavenger hunts – one in English and one in French. Both were ordered discreetly by the boyfriend, who planned a beautiful, meaningful and dramatic way to propose. These took place at night in the Old City, and included personalized clues, gifts, flowers, musicians and a photographer. It was emotional and exciting, and we were glad to be a part of it.Israel ScaVenture now offers two special bar/bat mitzva programs. One is a private hunt for the bar mitzva boy or bat mitzva girl and their friends; each bar/bat mitzva receives a special certificate at the end of the hunt. The second option is for the child to prepare to be a co-guide by learning with an Israel ScaVentures guide before the event. It is a memorable and educational experience, and the bar/bat mitzva receives a special certificate and gift from Israel ScaVentures.
Ten years ago, when you looked to the future, did you see yourself as being part of the company operating one of Jerusalem’s most popular games? Ten years ago, I was preparing to return to Israel after a five-year shlihut [mission abroad] in which I taught at a girls’ high school in London. Israel ScaVentures was nowhere on my radar at all – but there is something amazing about Israel in that it allows creativity to flow, and gives you the opportunity to reinvent yourself.I look forward to creating more routes in the near future.
Israel ScaVenture Routes:
• Jerusalem – Old City, Nahlaot, Yemin Moshe, Mahaneh Yehuda, Baka
• Gush Etzion – Jeeping
• Tel Aviv – Neveh Tzedek
• Safed
• Birthday Bash scavenger hunts