As deadline looms, Trump may punt fate of Iran deal to Congress

And should he decide to decertify Iran's compliance with the accord, he will have ample "ground to stand on," US envoy Nikki Haley stresses. 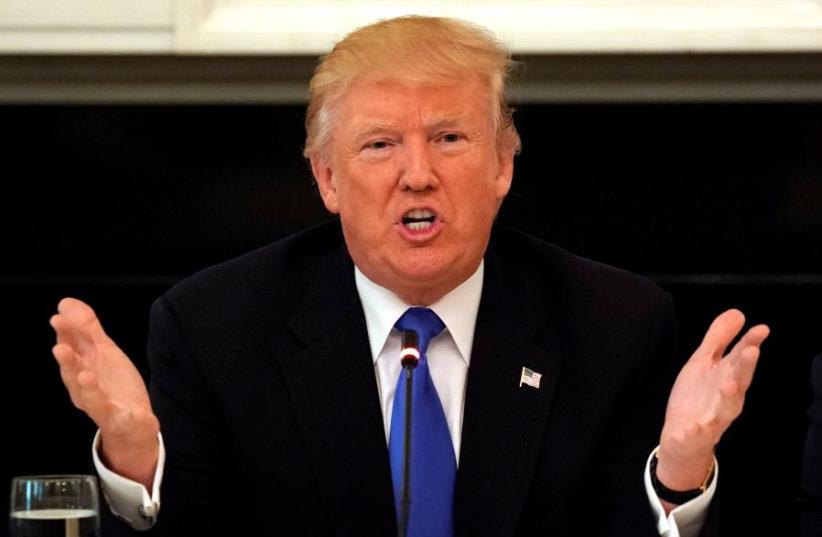 U.S. President Donald Trump speaks at the White House
(photo credit: KEVIN LAMARQUE/REUTERS)
Advertisement
WASHINGTON – The Trump administration may declare in October that Iran has violated a US law governing America’s role in its 2015 nuclear deal with world powers, which would force a heated debate in Congress on whether to reimpose sanctions on the rogue state, a senior administration official said on Tuesday.US Ambassador to the United Nations Nikki Haley said in a speech that President Donald Trump would have “ground to stand on” should he decertify Iran’s conformity with the terms of the legislation, which requires the president every 90 days verify Tehran’s compliance with the nuclear accord itself, as well as its continued service in the national security interests of the United States.That law, written by Democratic Sen. Ben Cardin of Maryland and Republican Sen. Bob Corker of Tennessee, “asks us to put together the pieces of the jigsaw puzzle,” Haley told the American Enterprise Institute, a think tank in Washington.“Under its structure, we must consider not just the Iranian regime’s technical violations of the JCPOA [nuclear agreement], but also its violations of [UN Security Council] Resolution 2231 and its long history of aggression,” she said, referring to a UN resolution that codified the nuclear accord. “We must consider the regime’s repeated, demonstrated hostility toward the United States. We must consider its history of deception about its nuclear program. We must consider its ongoing development of ballistic missile technology.”The ambassador thus outlined a subtle strategy that would allow Trump to punt the fate of the nuclear accord to members of Congress, who in reinstating nuclear-related sanctions would effectively kill the agreement.“Congress could debate whether the nuclear deal is in fact too big to fail,” Haley asserted. “We should welcome a debate over whether the JCPOA is in US national security interests.”Brokered by the Obama administration in 2015 with Iran, Germany and the four other permanent members of the UN Security Council, the JCPOA was designed to strictly govern the Islamic Republic’s nuclear work without addressing its “nonnuclear activities” of concern to international powers. But critics of the deal – including the Israeli government – worry that in failing to address those activities, it provides cover for Tehran to expand its military operations across the region.“The deal drew an artificial line between the Iranian regime’s nuclear development and the rest of its lawless behavior,” Haley said. “The result is that for advocates of the deal, everything in our relationship with the Iranian regime must now be subordinated to the preservation of the agreement.
Khamenei says Iran does not fear Trump
“Iran’s leaders want to use the nuclear deal to hold the world hostage to its bad behavior,” she said.Haley’s speech offered a first look of the administration’s plans for next month, when Trump – who throughout his presidential campaign railed against the nuclear accord – is faced with a hard deadline on recertification. She underscored that Trump has not yet decided to declare Iran in noncompliance, but that his decision to do so would not amount to US withdrawal from the nuclear agreement.She warned that, under the deal, Iran will be allowed to expand its nuclear infrastructure unchecked as key provisions of the deal expire. “ W e will be dealing with the next North Korea” if the JCPOA is preserved in its current form, Haley said. She criticized the agreement’s failure to link Iran’s ballistic missile program with its nuclear work, despite the UN Security Council’s repeated resolutions to that effect. And she noted that Iran has in the past hidden its most sensitive nuclear activities in military sites that are now hard to reach for UN inspectors.“Another major flaw in the JCPOA is its penalty provisions,” she said. “Whether an Iranian violation is big or small – whether it is deemed to be material or nonmaterial – the deal provides for only one penalty. That penalty is the reimposition of sanctions.“And if sanctions are reimposed, Iran is then freed from all the commitments it made,” she continued. “Think about that. There is an absurdly circular logic to enforcement of this deal. Penalizing its violations don’t make the deal stronger, they blow it up.”Indeed, that decision would be in Congress’s hands should the president follow through on Haley’s plan.Congress conducted a bruising debate in August 2015 over whether or not to vote against the agreement – a vote that drew Israel’s government into American politics and challenged many senior Democrats to buck the leader of their own party.Haley did acknowledge that America’s allies in Europe want to see the accord preserved, but claimed they have expressed concern with Iran’s regional activities in recent months.“I’m not making the case for decertifying,” Haley said, while adding: “Should he decide to decertify, he has ground to stand on.”