Couple says they are still working on name for son, third in line for the British throne; add they were feeling "very emotional."

By REUTERS
Prince William, Kate present new son 370
(photo credit: REUTERS)
Advertisement
LONDON - Prince William and his wife Kate gave the world its first glimpse of their new baby on Tuesday when they left hospital with the boy who is third in line to the British throne.To huge cheers from well-wishers and hospital staff, the beaming couple waved and took turns to hold their son, wrapped tightly in a white blanket with only the top of his head visible. 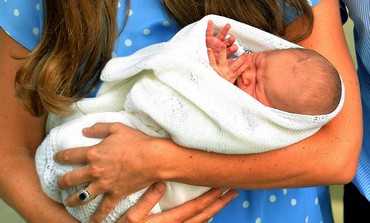 "We are still working on a name, so we will have that as soon as we can," William told reporters, adding that he could not be happier. "He's got her looks, thankfully."Kate, wearing a pale blue dress with white polka dots, said they were both feeling "very emotional"."It's such a special time. Any parent ... will know what this feeling is like," she said before William drove the young family away in a Range Rover.Kate, 31, gave birth to the couple's first child on Monday afternoon, ending weeks of feverish anticipation about the arrival, and all three spent the night in the hospital - St Mary's in west London.They adhered to tradition by giving the public the first sight of the baby on the steps of the hospital as they left - just as William's father Prince Charles and late mother, Princess Diana, did with him.The baby's name will be announced later. George and James, both traditional royal names, were favored choices with British bookmakers.Kate's parents, Carole and Michael Middleton, were the first visitors to see the couple and their new child. Asked if she would reveal the name or had made any suggestions, Carole Middleton laughed and said: "Absolutely not."Witnessing historyApart from the media, the event attracted hundreds of well-wishers from the public."We're here to witness history, where a future monarch has been born. I just can't wait to see them today," said Maria Scott, a housewife from Newcastle in northern England who had camped outside the hospital since Saturday.The baby is third in line to the throne after grandfather Charles and William, 31, and pushes the fun-loving Prince Harry, William's brother, into fourth place."I'm thrilled and very excited," Charles said during an official visit in northern England.His second wife, Camilla, spoke of a "wonderfully uplifting moment for the country," adding that Charles would make a "brilliant" grandfather.Congratulations flooded in from around the world after the announcement of the birth, which was followed moment-by-moment by global media as well as TV and press in Britain.The British mass-circulation newspaper the Sun temporarily renamed itself "The Son", and most newspapers issued special supplements.The birth fuels a new wave of popularity for the House of Windsor inspired by the younger royals, William and Harry.Support for the royal family dipped after their mother Diana's death in a car crash in Paris in 1997, a year after her divorce from Charles, as the royal family's handling of the aftermath prompted accusations that they were out of touch.But last year's celebrations of Queen Elizabeth's 60th year on the throne showed support for the monarchy was running at a record high.Wrapped in the flagHordes of TV crews, photographers and royal fans wrapped in British flags were camped outside the hospital for the first glimpse of the baby, who will be called the Prince of Cambridge.To mark the birth, the Royal Artillery fired a 41-gun salute at London's Green Park and 62 rounds were fired at the Tower of London. Bells at Westminster Abbey, where the couple married in April 2011, rang out for more than three hours.Outside the Queen's London residence, Buckingham Palace, a military band played "Congratulations" following the traditional Changing of the Guard ceremony.William and Kate, who met when they were students at university in Scotland about 10 years ago, have officially been known as the Duke and Duchess of Cambridge since their wedding.The couple, who have been living in a cottage in north Wales where William is based as a Royal Air Force helicopter pilot, will eventually take up residence with their baby at Apartment 1A in London's Kensington Palace, William's childhood home, when a 1 million pound ($1.5 million) refurbishment is completed later this year.Royal experts said the new prince would now be taken out of the public glare."Having a baby is a very private moment, and they are a private couple, so the next time we see the baby will be the official photo, and that could be weeks," said Joe Little, managing editor of Majesty magazine.