Presidential plane crash has moved the Kremlin to make amends with Poland.

By JONI WAJNRYB-SARIG
APRIL 18, 2010 23:34
Medvedev & Tusk 311
(photo credit: ASSOCIATED PRESS)
Advertisement
As Western delegation after delegation announced they were canceling attendance at the state funeral of President Lech Kaczynski, and as Eastern European neighbors' delegations decided to arrive by car, and in most cases did not make it in time, Russian President Dmitry Medvedev arrived by Plane. Medvedev was reinforcing a message Russian leadership had very successfully been sending Warsaw's way the week since the tragic crash of Poland’s presidential plane on Russian soil on Saturday.Russia has been doing everything in its power to prevent the April 10th crash, which killed President Lech Kaczynski and 95 others from derailing always-tense Polish-Russian relations. And in fact the relationship is warmer than ever.Since coming to power in November 2007, Polish Prime Minister Donald Tusk has been trying to mend relations with Russia, and Russian Prime Minister Vladimir Putin has responded in kind, though without the determination necessary to overcome centuries of suspicion by Poles toward their powerful and often aggressive neighbor to the east.Putin’s unprecedented decision to host a ceremony commemorating the 1940 massacre of 22,000 Polish prisoners of war at Katyn by Stalin’s secret police, the NKVD, on April 7, inviting Tusk but not Kaczynski, which was hailed by some Poles as a breakthrough, was criticized by others for equating Russian and Polish victimization by Communism, not pinning responsibility for the murders on the Soviet government, and for promising to declassify and grant access to documents regarding the event, but failing to follow through. 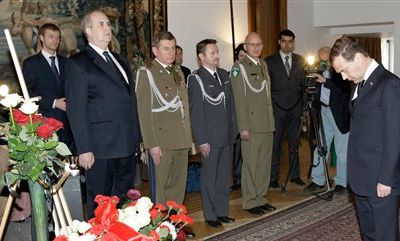 However, Kaczynski’s death, en route to a Polish ceremony to commemorate the same Katyn massacre, has prompted Putin and Russian President Dmitry Medvedev to make far more dramatic gestures.The most significant was the airing of the classic Polish feature Katyn, concerning the massacre, on the day following the crash. The movie aired on prime time on the Russian national TV network Rossiya.“The movie had been shown on a niche channel of the network on April 2, but now a nationwide audience was exposed to the dramatic historical events. This was very important to the Polish people, and has left a lasting impression,” Ewa Milewicz, a journalist with leading newspaper Gazeta Wyborcza, told The Jerusalem Post.On Wednesday in an interview broadcast on Russian television, Medvedev stated clearly what Poles had felt was missing from Putin’s speech at Katyn.“It is obvious the shooting of the Polish officers was ordained by Stalin and the USSR leadership of the time,” he said.Putin’s personal commitment to the crash investigation, which he saidwould be handled jointly by Polish and Russian experts, and sensitivedealing with families of the perished, an outpouring of emotion bycommon Russians on the day of mourning announced for last Monday, andMedvedev’s announced participation at the state funeral on Sunday – allhave fostered an entirely fresh atmosphere of fellow-feeling betweenPoles and Russians, both among peoples and politicians, which may lastbeyond the moment.The Russian side received with satisfaction the speech Kaczynski, anunforgiving critic of Moscow, had apparently intended for the PolishKatyn ceremony. The Russian state news agency publicized the textcalling for conciliation between the two countries, which begins:“Let’s make the Katyn wound finally heal over. We are already on theway toward this. We Poles appreciate what has been done by Russians inrecent years. We should follow the path which brings our nationscloser, we should not stop or go back.”
Advertisement
Subscribe for our daily newsletter