The men are accused of making plans to kill the organizer of a Mohammed cartoon exhibit that took place in Texas in May, and later to target Massachusetts police. 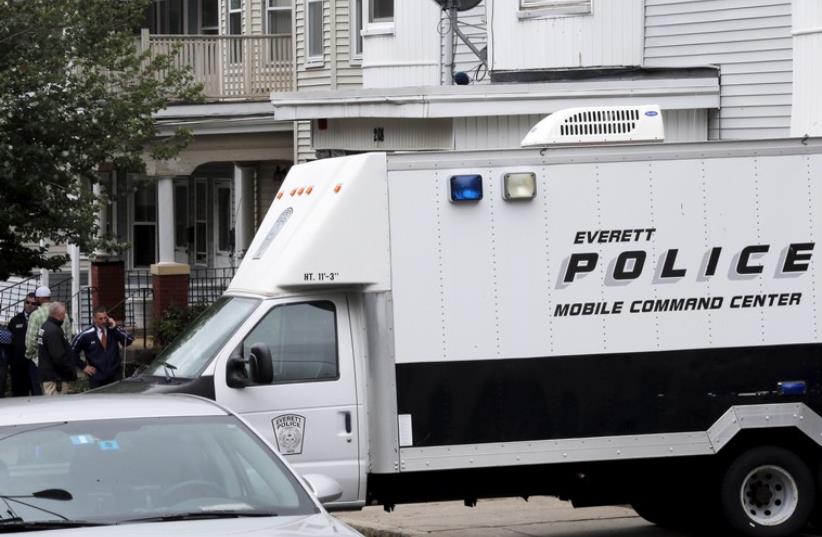 Law enforcement officials are gathered on a residential street in Everett, Massachusetts June 2, 2015 in connection to a man shot dead by police in Boston after coming at them with a large knife
(photo credit: REUTERS)
Advertisement
BOSTON – Prosecutors charged two US men on Friday of plotting to help the Islamic State militant group by beheading Americans, after an investigation that led law enforcement officers to shoot a suspect dead last week in Boston.The case follows a handful of so-called "lone wolf" attacks in the United States and Canada since last year by people whom authorities said were inspired by Islamic State, which controls parts of Syria and Iraq and has vowed attacks on the West.The men, Nicholas Rovinski, 24, of Rhode Island, and David Wright, 25, of Massachusetts, are accused of making plans with Wright's uncle, Usaamah Abdullah Rahim, to kill the organizer of a Mohammad cartoon exhibit in Texas in May, and later to target Massachusetts police, a US Department of Justice statement said.Prosecutors say that "beginning at a date unknown but no later than May 2015, Wright, Rovinski and Rahim conspired to commit attacks and kill persons inside the United States, which they believed would support ISIL's objectives," using an alternative acronym for the group.Police shot 26-year-old Rahim dead last Tuesday when FBI agents and a Boston police officer approached him in a parking lot to question him. Authorities said Rahim threatened the law enforcement officers with a knife. Wire taps of his phone calls had revealed Rahim was planning to behead police officers, law enforcement authorities said.Prosecutors said the three men initially wanted to behead New York resident Pamela Geller, who had organized an event in Texas highlighting cartoons of the Prophet Mohammad, images that many Muslims consider blasphemous. Two gunmen had attacked that event, and were shot dead by police.Prosecutors said Rahim later called Wright to say he had revised his plan and instead intended to attack "those boys in blue," by which he meant Massachusetts police officers."Wright urged him to first wipe his laptop computer and to destroy his phone so that they could not be searched by law enforcement, and urged him to make a will," according to the Justice Department statement.Rovinsky and Wright are charged with conspiracy to provide material support to Islamic State, an offense that carries a maximum prison sentence of 15 years.Rovinski, who is also known as Amriki aka Nuh al Andalusi, was arrested at his home on Thursday night, and will appear in court on Friday. Wright, also known as Dawud Sharif Abdul Khaliq, has been in custody since last week on a charge of obstruction of justice. He is scheduled to appear in court on June 19.