Anti-Christian graffiti included: Death to the heathen Christians the enemies of Israel. 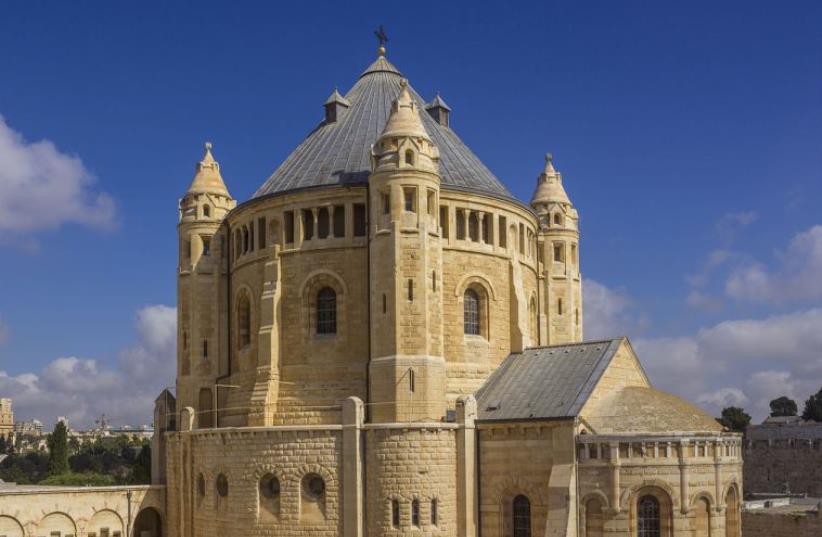 Dormition Abbey
(photo credit: ANDREW SHIVA / WIKIPEDIA)
Advertisement
The Jerusalem District Attorney’s Office filed an indictment on Sunday with the city’s district court against three minors from Jerusalem, aged 15-16, forwriting anti-Christian graffiti on the Dormition Abbey and on parts of the Via Dolorosa on January 16-17.“May his name be obliterated,” “Death to the heathen Christians the enemies of Israel,” “Go to hell” and other messages were crudely scrawled in red ink, drawing international condemnation.Due to the defendants’ ages, their identities remain under gag order.They were charged with destroying property based on hostile religious motives and with harming religious sensitivities.A statement put out by the Justice Ministry described the crime as follows: “The three walked through Hagai Street in the Old City, eventually arriving at the third stop of the Via Dolorosa walk. One of the defendants started writing messages on the site to insult Christianity and Jesus. The second defendant served as a lookout while the first wrote the messages.
Hebrew graffiti at Jerusalem monastery threatens Christians
Next, they proceeded to the fifth stop on the Via Dolorosa, writing additional messages.Two hours later, one of the defendants met up with a third defendant and the two of them went to write offensive messages on walls and doors next to the Dormition Abbey.”Noting previous vandalism at the church, the Anti-Defamation League issued a statement following the initial arrests of the defendants denouncing the hateful graffiti at the Dormition Abbey, near where traditional Christians believe Jesus held the Last Supper and the Virgin Mary ascended to heaven.“This church has been the target of repeated attacks,” said ADL’s Israel office’s acting director, Carole Nuriel, and Rabbi David Fox Sandmel, ADL’s director of interfaith affairs, in a joint statement.“While we acknowledge Israel’s efforts to combat this extremism and call to bring the perpetrators to justice, we share the feeling expressed by many in the Christian community that enough is enough.”Prime Minister Benjamin Netanyahu denounced the crime during his weekly cabinet meeting, “This is an action deserving of every condemnation... Israel is a place where Christians and all other religions enjoy freedom of worship, and the only place in the Middle East where the Christian population is growing.”Joint List chairman Ayman Odeh called the vandalism a hate crime, blaming the government for “leading the hatred and approving, with a wink, the continuation of hate crimes against the Arab minority in the state.”In a statement, the Latin Patriarchate of Jerusalem described the Dormition Abbey as “a significant place for interreligious dialogue between Judaism and Christianity,” and expressed “hope that the perpetrators will be arrested before they put proposed threats into action.”In 2014, hours after Pope Francis concluded his visit to the capital, a vandal set fire to a guest book at the entrance to the compound. In May of 2013, the church was vandalized with anti-Christian graffiti, and the tires of cars parked near the building were slashed.