A toast to Beit Sahour 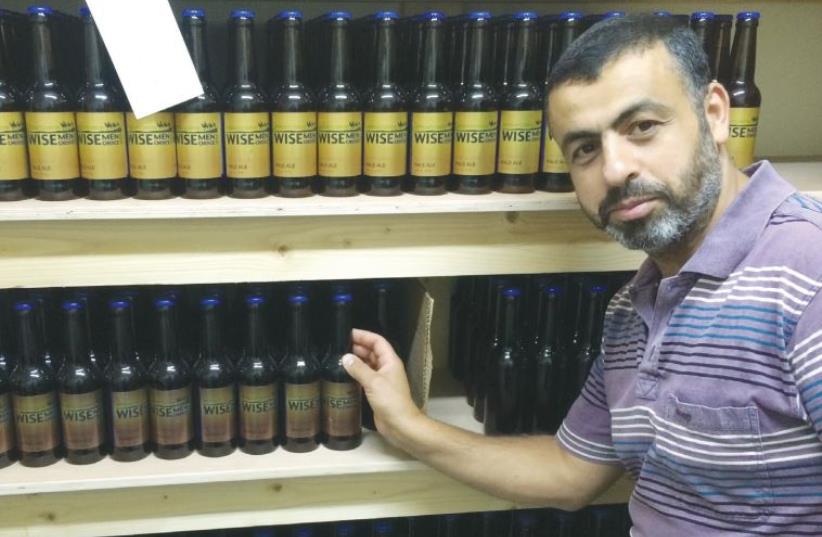 RAFAT HOUARY shows off his Wise Men Choice spiced ales brewed in Beit Sahour.
(photo credit: ADAM RASGON)
Advertisement
Israeli and imported beers historically have taken up display space at local markets in Bethlehem and Ramallah. However, following the signing of the Oslo Accords in 1993, Taybeh, made in the eponymous town northeast of Ramallah, emerged as the West Bank’s local favorite suds. More recently Shepherds Beer, brewed by the Birzeit Brewery, made its debut and has won positive reviews. Today a third local beer has entered the Palestinian market, Wise Men Choice, crafted by the Bethlehem region’s only microbrewery.Rafat Houary, a woodworker who lives in Bethlehem’s predominantly Christian suburb of Beit Sahour, has always loved tasting different beers. Three years ago, after visiting numerous American breweries, the woodworker decided to launch his own Palestinian beer.Houary and his friend Waseem Khoury mapped out a business plan to brew Wise Men Choice Beer. The name refers to the three magi or wise men who visited Mary and her newborn son Jesus in Shepherds’ Field (Luke 2:8-20). The partners presented their business plan to various investors but failed to secure seed money. Uncertain about the business’s future, Khoury pulled out. Houary then took a low interest loan from a local organization that supports small businesses. “I came home one day and decided that I had to start. I told myself that I had planned enough,” he said.With the loan, Houary purchased brewing equipment and installed it in the basement of his home. He also concluded that being a biermeister would be his second job, and that he needed a regular income to support his wife and three children.Surfing the Internet for info on importing high quality ingredients, Houary came across Herzl Beer, a microbrewery in Talpiot, Jerusalem. Itai Gutman, one of the founders of Herzl Beer, referred Houary to a supplier in Tel Aviv, from who he began purchasing malted barley from the UK, and hops and yeast from the US.Speaking of Gutman, Houary said, “He helped me find the materials I needed. He connected me with a number of people, and I eventually found all the materials I needed.” He added, “I can ask Itai anything at any time, and he will always answer me.”Houary today produces between 200 to 800 bottles of beer monthly. “My production depends on demand. I do not want to make too much because I do not have a large storage space,” he said. He currently supplies several restaurants in the Bethlehem region with his 350 ml bottles for a wholesale price of NIS 8.75 including Hosh Yasmin, Rewind, L’Abre, and the Tent.While he would like to begin supplying supermarkets as well, he is concerned that he will not be able to compete with Taybeh and Shepherds, which retail their beers for as little as NIS6.50. Many factors explain the price difference of Houary’s beer and his competitors. “They import huge amounts of raw materials directly, and I import small amounts through a supplier. I also add many expensive materials to my beers that they do not, such as honey, bitter oranges, coriander, pumpkin and other products,” he said.Houary is optimistic his business will succeed because he provides a variety of beers which his competitors largely do not: “Almost all the beers in the Palestinian market fall in the category of lagers. I make ales,” he said.The spices and fruits that Houary adds to his beers also distinguish them from his competitors. For example, he adds sage to his Bethlehem Pale Ale, and pumpkin and honey to his Pumpkin Ale. The ingredients add a rich and unique flavor, he said.Yet Houary admits that while the Palestinian market appreciates the local spices and fruits he adds to his beers, it is not accustomed to ales. “The Palestinian consumer of beer is not used to the taste of ales, which typically have a heavier and more bitter taste.” At the moment, expatriates and Palestinians who have lived abroad make up his target market. But he remains confident that with greater exposure local Palestinians will grow to appreciate his spiced ales.Houary hopes that as his business grows, he’ll be able to make brewing his full-time passion. Recently he introduced his sixth beer, Sunshine Wheat. Orders from restaurants are on the increase, and local supermarkets have recently asked him to supply them. Houary is cautiously optimistic that Wise Men Choice has a bright future.“God willing, the business will continue to grow,” he says.