Olim hailed for continuing to contribute to Israel’s national security

Meet the volunteer soldiers who didn't have to serve in the IDF but did so anyway. 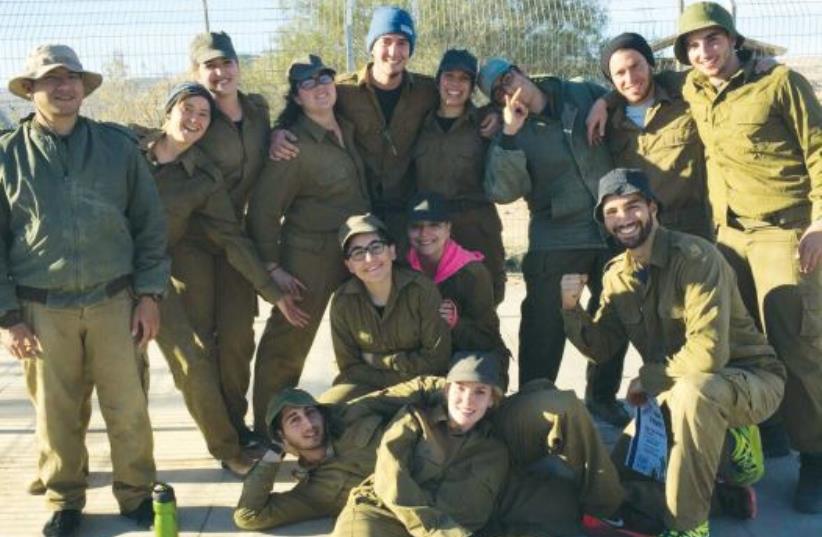 During the War of Independence, both Jewish and non-Jewish volunteers came to fight for the continued existence of the nascent Jewish state. Today, 74 years later, there are still many foreign-born soldiers enlisted in the IDF. Some are Israeli citizens, and others came as lone soldiers from Argentina, South Africa, France, Brazil, Italy, Ukraine, the United Kingdom, the United States, Iran, and more.

Soldiers from these countries were among the 120 outstanding soldiers who were honored on Independence Day at the president’s residence.

Even prouder than the parents who attended the ceremony was Yeshayahu Yechieli, director of the Naale Administration, who boasted that there were seven Naale alumni among the 120 outstanding soldiers. The Naale Elite Academy offers a four-year scholarship to Jewish high school students from around the world to complete their studies in Israel.

Among the Ukrainian soldiers, Yechieli said that there was one whose parents are trapped in Ukraine with no immediate means of escape.

Among these 120 outstanding soldiers were several Israeli volunteers who were granted exemptions due to disabilities, health issues, and religious and ethnic backgrounds. Despite the exemptions they were given, these volunteers fought to be allowed to serve, and have proven to be invaluable additions to the IDF.

A soldier born in Iran had wanted since childhood to fulfill his grandfather’s dream of moving to Israel. His family tried, but it took several years before they finally succeeded. This soldier is now a valued member of military intelligence.

This year’s celebration was different from its predecessors, as it involved more pomp and ceremony. A red carpet was laid down on the center aisle, upon which the soldiers led by Oded Nahari, IDF chief of Protocol and Ceremonies, marched to the stage. They were followed by President Isaac Herzog, Prime Minister Naftali Bennett, Defense Minister Benny Gantz, and IDF Chief of Staff Aviv Kohavi. They were then followed by their wives.

For Herzog and his wife, Michal, this was the first time that they were hosting an Independence Day ceremony, and the president confessed that they were both excited at the prospect.

He also spoke of the goodwill that he and his wife had encountered wherever they had gone. He spoke of the people’s desire to do good for Israel. He singled out the outstanding soldiers and saluted them.

Although his words were brimming with positivity, Herzog made it obvious that he knew where change was needed. Looking forward 26 years when Israel will celebrate its centenary, Herzog said he wanted to see more outreach, responsibility and unity.

“There are wonderful people in every sector of society,” he said. He also spoke of the privilege to welcome the family of Amir Khoury, the Arab policeman who in March lost his life while halting a terrorist attack in Bnei Brak.

Bennett quipped that he was half-expecting a political crisis. “Everything is going too smoothly,” he said, which elicited a burst of laughter from the crowd. Like Herzog, Bennett said that he could see a lot of goodwill among the people, and he too professed his desire to build a better country.

Speaking of his government, Bennett said: “I head a government whose composition I never dreamed of.”

Regardless of their differences, he emphasized that both the right and left want the best for Israel. “Yes, there are differences,” he conceded. “But they are all patriots and want peace.”

Emphasizing the duality in Israeli attitudes, Gantz said, “You live between oy vey and wow! These two extremes characterize Israelis, but everyone agrees on security.”

Kohavi, who will serve his final year as chief of staff, paid tribute to the spouses and life partners of military commanders. He said that they are the unspoken heroes who take additional burdens upon themselves – without their support, the commanders could not do what they do.

In a total departure from the norm, Michal Herzog interviewed three female soldiers, asking them about their motivations and challenges.

Another change was the inclusion of video clips of world leaders. In the past, the president’s office issued a list of greetings from around the world, from Egypt, Jordan, England, and the United States. This time, these greetings took the form of video clips, which included greetings from US President Joe Biden, German President Frank Walter Steinmeier, Indian Prime Minister Narendra Modi, Greek President Katerina Sakellaropou, and Japanese Prime Minister Fumio Kishida.

Biden proudly declared that America had been the first country to recognize Israel’s independence.

Steinmeier, referring to his country’s Nazi past, said: “We Germans are deeply involved with Israel and will always be with you.”