Bayit Yehudi is at a crossroads

Bennett faces challengers from hard-liners and his own central committee – but that may not be a bad thing for him. 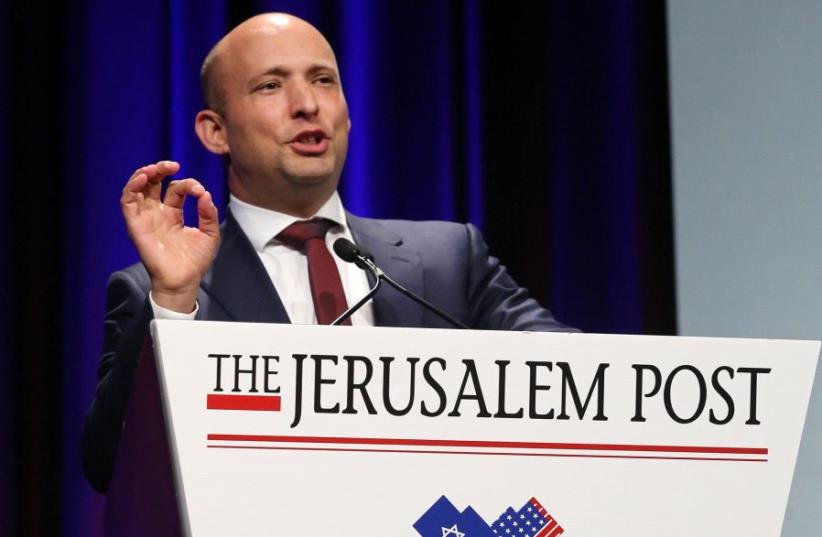 Naftali Bennett at the JPost Annual Conference 2017
(photo credit: SIVAN FARAG)
Advertisement
A debate is taking place about what Bayit Yehudi’s future and character should be: focused on religious Zionists, or open to more of the secular population? All about settlements and diplomatic issues, or much more? Bayit Yehudi is at a crossroads, but you would be forgiven for thinking you have heard that line before, because these questions have come up again and again since Naftali Bennett took over nearly five years ago.The rift between Bayit Yehudi and the National Union, the more religious, more rightwing party within the Bayit Yehudi faction, is, to some extent, about that, and may come to a head in their two separate ideological conferences next month.The hard-liners in the National Union – Agriculture Minister Uri Ariel and MK Bezalel Smotrich – don’t like Bennett’s willingness to compromise on matters that are important to them, and Bennett doesn’t particularly like having a rabbinically aligned pressure group within his own Knesset faction. National Union, in fact, used to be a mixed religious-secular farright bloc made up of several parties – Yisrael Beytenu was once one of them – but it is now just Ariel and Smotrich’s religious-right party, Tekuma.National Union would like to run with Bayit Yehudi in the next election, like they have in the past two. A source close to Bennett said he is weighing his options and doesn’t see a need to commit yet. Meanwhile, Ariel and Smotrich have taken to making snide comments about Bennett to the press, which the source says is not helping their case.Smotrich said Monday that “the question is where Bayit Yehudi is heading. “If Naftali wants to be a secular party that is right-wing diplomatically, he can go ahead [without us], but if he wants to keep the party religious-Zionist, then we will run together.”“It’s okay to have [Justice Minister Ayelet Shaked, who is secular] and some others,” he added. “But if Naftali decides he wants to be prime minister fast and thinks heading a religious party is a problem – if that’s what he wants, then he should make a decision.”Similarly, Ariel told religious- Zionist weekly Seventh, which is distributed in synagogues, that “Bennett thinks he has votes in the center and assumes he will bring Knesset seats from there, but it won’t work. He won’t find votes among the hipsters in Tel Aviv and not the same-sex couples.”On Sunday, Smotrich invited a select group of people – including some Bayit Yehudi central committee members – to the “National Union Diplomatic Conference,” in which he will present his diplomatic plan.The conference is on September 12, two weeks before Bayit Yehudi’s previously announced central committee conference to discuss ideological matters.Some in Bayit Yehudi saw the move as an attempt to preempt and undermine the larger party, but Smotrich denied the claim and called such people “little foxes trying to heat things up.”“The conferences are on different subjects, and I invited whoever wants to come,” he said. “This isn’t about the conference; it’s about my diplomatic plan.”The Bayit Yehudi conference is not about diplomatic issues – an area in which Bennett has clear positions – at all. The central committee conference reflects the difficulty Bennett has promoting his agenda, not just because of Tekuma, but within his own party.The topics on the agenda are religion and state, where the source close to Bennett says he fears the central committee will take a position too close to the haredi one; public education, where there’s a chance they’ll come out against his policies as education minister; and equal opportunities for the periphery, where Bennett’s free-market approach could clash head-to-head with some old-school Israeli socialist ideas.The conference is what the source said is really behind the threat of resignation by Rabbi Yisrael Rosen, a prominent religious-Zionist figure and a member of Bayit Yehudi’s elected presidential board, which he said was about Bennett employing a gay woman as his spokeswoman. Rosen apparently asked to lead the religion and state debate, but was rebuffed.Still, the fact that Rosen chose to go public with his opposition to Bennett’s lesbian spokeswoman, and Bennett remained defiant, shows that at least Rosen thinks the party leader is on the other side of a cultural divide with much of his party.Why is Bennett holding a conference in which he stands to lose? The source close to him explained that he chose to appease his central committee ahead of more important conferences.At the beginning of 2018, there will be an election to the central committee and for heads of party branches.Bennett thinks that he will win bigger there, because of a membership drive last year.Old members had to reregister and pay new dues, and insiders say it succeeded in changing the party’s character in Bennett’s favor, though they will know for sure only next year.