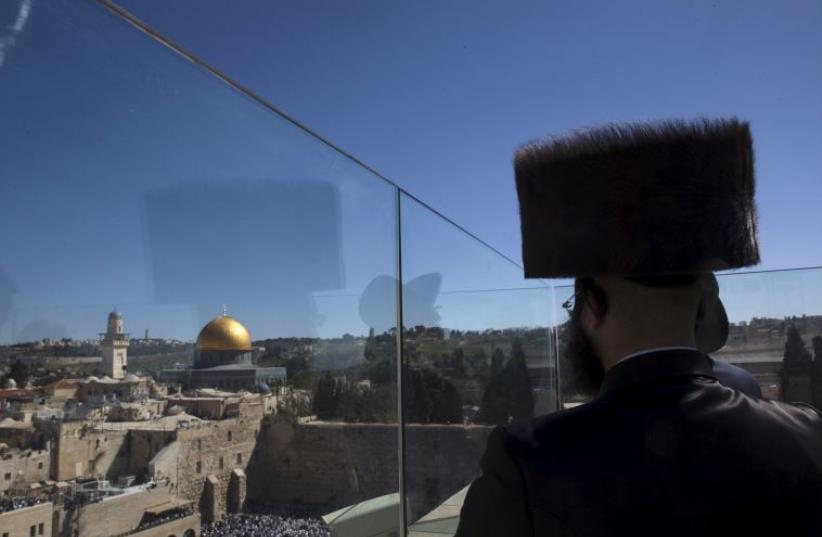 An ultra-Orthodox Jewish man stands on the rooftop during a special priestly blessing for Passover at the Western Wall
(photo credit: REUTERS)
Advertisement
The frequently controversial chief rabbi of Jerusalem Rabbi Shlomo Amar raised the ire of the haredi political leadership on Wednesday when he called into doubt the lucidity of the senior haredi rabbinical leadership.Amar was discussing the recent agreement between the government and the Reform and Conservative movements, together with the Women of the Wall organization, to create an egalitarian section at the Western Wall complex.The administrator of the Western Wall Rabbi Shmuel Rabinowitz was involved, together with haredi MKs, in coordinating the response of the haredi leadership to the proposals and said he had consulted with two of the leading haredi rabbis.Amar vehemently opposes the agreement granting government recognition to the non-Orthodox movements and their prayer rights, and alleged on Wednesday that the leading haredi rabbis who were consulted are unable to make clear decisions on such matters.The leader of the mainstream haredi non-hassidic community is Rabbi Aharon Leib Shteinman, who is 103 years old, is physically frail and has been hospitalized on several occasions in recent months.Speaking on Kol Hai Radio station, Amar opined delicately that the rabbis who were consulted on the agreement might be too old to make such decisions, but did not mention any names.“What they are saying in the names of the great rabbis needs looking into,” Amar said, initially without elaborating.Later in the interview he added: “Rabbi Rabinowitz told me that he consulted with two great rabbis, these great rabbis – I don’t know if they are today in a situation that is appropriate…,” without finishing his sentence.“Maybe they are at the type of age that I don’t know…” he concluded.The mental acuity and fitness of the senior haredi leadership is an extremely sensitive subject and the courts around the leading rabbis often obscure any deficiencies that occur in their advanced years.Amar’s comments are not the first time a notable rabbi has commented on Shteinman’s health.In 2014, during the election campaign for chief rabbi of Jerusalem, Rabbi Eliyahu Schlesinger, the state-paid rabbi of the Gilo neighborhood in Jerusalem said Shteinman “was not in a position that he can really decide on fine and difficult issues,” and said that it was not entirely clear that the elderly rabbi “understands the depth of these matters.”Amar’s remarks on Wednesday set off a firestorm of denunciations against him.Benny Rabinowitz, an editor of the influential haredi Yated Ne’eman newspaper, was scathing in his criticism of the Jerusalem chief rabbi.“What Rabbi Amar said was incredibly severe, it is unparalleled chutzpah, and brazenness,” he told The Jerusalem Post. “Rabbi Amar is the last person who should speak on this issue, especially bearing in mind that he met with Reform people during the elections for chief rabbi of Jerusalem to get their support,” Rabinowitz continued, referring to a meeting held by Amar with Conservative Rabbi Ehud Bendel during the election campaign.Rabinowitz said Shteinman was “fully functional, sits in long, complex meetings and goes into the finest details on all public issues.”He also upbraided Amar for his past actions toward another leading haredi figure, the late Rabbi Ovadia Yosef, when Amar ran a candidate for chief rabbi of Israel against Yosef’s candidate, his son and eventual victor Rabbi Yitzhak Yosef.Yated Ne’eman is the mouthpiece of the Degel Hatorah political party, which represents the non-hassidic Ashkenazi haredi community that Shteinman leads.Rabbi Mordechai Bloi, another leading figure in the non-hassidic haredi community, also denounced Amar in the strongest terms, referencing past actions of the rabbi.“It’s unthinkable that someone bearing the title chief rabbi of Jerusalem who has a box of impurities behind him stands up and says that people asked the great rabbis and they don’t know what they are asked,” said Bloi.“If this is not Reform, then I don’t know who is a Reform [Jew].”Regarding the substance of the agreement on the Western Wall, Amar bitterly condemned the deal, saying it was “the first time that the government of Israel has given recognition and has lent its hand to a movement of these evil people who uproot and destroy the Jewish people.”“They have deeply corrupted the vineyard of the House of Israel and now they want the Western Wall,” Amar railed.